Junior Eurovision 2017 is drawing closer. And last week, as anticipation continued to build for the 15th edition of the contest, the EBU and host broadcaster GPB added to the hype by releasing images of this year’s stage design.

Inspired by Mariam Mamadashvili’s winning song “Mzeo” (Sun), the stage resembles a big sun shining so brightly that its rays shoot out towards the audience. To many it could be the child of the Eurovision 2015 stage in Vienna, which featured intricate pipework bursting outward as well. Whether you think the massive panels are sun beams, giant shards of glass or piano keys, they add dramatic effect and will frame the performers beautifully.

Many of our readers have reacted quite positively, suggesting that the stage looks even better than the adult Eurovision stage from Kyiv. While that might be a bit of a stretch, it definitely hints at the scale and ambition of the Georgian team.

Our readers have shared all manner of opinions on social media.

On Instagram Breebroo1 noted how the sunny stage reflects this year’s theme of “Shine Bright” and its accompanying artwork. “Is it just me or is the JESC stage always in great connection to the logo,” he writes. “Not that much with the ESC and its logos.”

Eurovisionbyjaz says it “looks pretty epic”, and keanuxcvi compares it to MTV’s annual awards show: “Anyway doesn’t it look like the stage of VMA 2015? The upper and the left and right parts look very familiar.”

Alex_vovidis suggests the kids’ show is slaying the adult show when it comes to setup: “When the ESC JUNIOR has a better stage than the official ESC since 2014.”

Panagiotis_gre says it “reminds me of ESC 2015 stage but damn that’s better!”

Alex F-W makes the rather amusing observation that it resembles broken piano keys.

Junior Eurovision 2017 marks the second time that the competition will take place on a Sunday afternoon. It is scheduled for 26th November at 16:00 CET in the Olympic Palace in Tbilisi, Georgia. After its third time winning, this is the first time Georgia will host.

What do you think of the stage? Do you think Georgia will do well as a host country? Let us know in the comments box below. 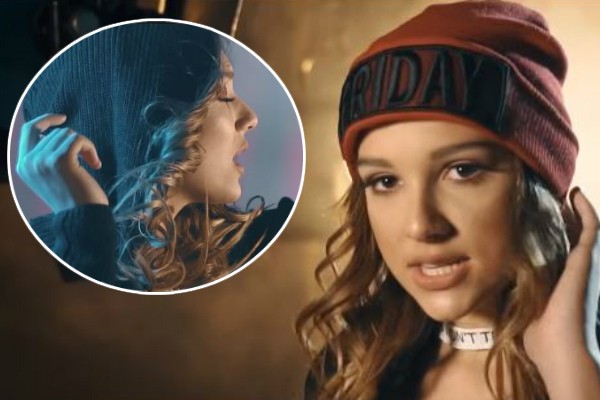 Now I wanna see it live and how perfomances will be utilised to realise if it’s good or not…
Hopefully it won’t be messed up with too-much lighting in area, as it barely coworks with filming cameras unless it’s just a strobes.

Y’all know that meme with the cat getting hundreds of knives pointed at? Well, this stage looks exactly the same lmao

The stage is beautiful but the logo reminds me NOS Primavera Sound.

calm down, I’m not saying that they copied the logo! Dont get me wrong. It just reminds me of the festival logo, the symbol is also basic, and makes sense at JESC. I am a designer, I know that there are coincidences. I have no intentions of creating battles, but by all means you’re interpreting me as if I wanted to overvalue my country.
There are those who underestimate our country, you may have noticed this, these people also annoy me, but I’m not like them.

The keys/rays look like they’re stuck on, rather than coming directly from the stage- but that’s probably due to the image being a visualisation rather than a photo?

Whoever the designer is just took this stage to a new level of magique! 😀

Stage is incredible, just like the participants this year.

I absolutely LOVE it <3 The arena is almost too perfect for JESC, not too small, but also not too big so the kids won't be intimidated. The stage looks awesom, its 79408969823659834798 times better then the Malta stage, and most if not all JESC stages. The only downside is that the LED screen seems a little small, but I am waiting for the rehearsals to see everything in action.
Btw, last year only had smoke towers as pyrothechnics, I hope this year has firework again, maybe even fire towers like Georgia at adult Eurovision this year.

I think it’s almost too much, but let’s wait and see for the final product.

I’ll only believe it’s nice when it’s completely built. But both idea and conception are awesome.