A month ago, they won Beovizija 2018 and earned the right to represent Serbia at Eurovision 2018. And now Sanja Ilic & Balkanika unveiled the new version of their winning entry, “Nova deca”.

The new version of the song was presented on the television show Šarenica, which airs live every Saturday and Sunday on Radio Television of Serbia.

Sanja Ilic & Balkanika formed in 1998 with the goal of performing traditional Balkan music amped up with an electronic sound. In a way “Nova deca” represents a three-minute recap of their oeuvre.

The revamped version features slight changes in the instrumentation. This version leans more electronic, with more prominent and modern beats. The female vocals seem to represent the traditional element of the song, giving it its strong Balkan identity.

Given that the song was performed with the pre-recorded background music, only lead singers Danica Krstic and Mladen Lukic appeared on stage.

Balkanika is actually a music collective that consists of twelve members, five singers and seven instrumentalists. However, due to the Eurovision rules, which do no allow more than six people on stage, only half of them will be performing in Lisbon.

Earlier this month, Sanja Ilic & Balkanika travelled to Porto to film their Eurovision postcard, which will, as all the others, follow the theme Meet Portugal.

Earlier last week, Sanja Ilic and Balkanika published their official promotional photos for Eurovision, including the cover for the single “Nova deca”. The photos were taken by Dusan Petrovic.

What do you think? Should Balkanika keep the new version for Lisbon or go back to the original one? Tell us in the comments section below! 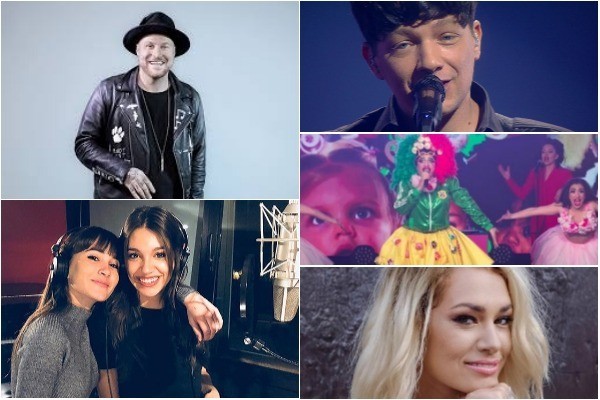 I don’t really like it sounds more modern, but I think generally it’s a good thing. They make it more accessible without moving away the traditional element.

the new verison is so good, its very cool and outstanding electro, ethnic song, and risky.

This was among my favorites; at least the original version was. This one, I don’t know… Probably not. It just doesn’t sound as good to me.

I approve of this change.

This is not the version that will be performed on ESC, Danica(black haired girl) confirmed, so everyone calm down

At least the dreadful dress attached to wrists is gone – so definitely an improvement.

I like the singer’s voice, it reminds me a lot of the same kind of yearning I heard in Jelena Tomasevic. I just think the song is not good enough, not even for the final, by far not good enough.

Eve
Reply to  Ari the Scorpio

Danica and Jelena are from same town actually and were members of recognized traditional music and dance group, Danica is currently studying Music academy- group ethnomusicology at Belgrade university.

First of all – what’s the point of performing like that? They don’t even seem to pretend that they are actually singing live. It looks really cringy. Secondly – I really don’t know what I think about this song. It makes me feel weird. On one hand, I really love Balkan languages and Serbian is beautiful in my opinion. But the performance is so weird. The lyrics are weird, they basically look like a members of a weird sect during their ritual who are about to sacrifice their victim lol.

I don’t see what is weird, please let me explain: it is simmple love song which tells about love relationship between two people who are looking at new generation with optimism and hope that they will together create better world than world in which their parents live? This is song of hope, optimism and overcoming obstacles with work and love. (sorry for my English, I hope I explained correctly.) Here are the lyrics: ”The world is ours and time stops flying when you’re with me. The world is ours and I wake up with a smile because you are there.… Read more »

the love story and the new children have nothing in common.. it is an awkward mix as the music itself.. decide is it ethnic or modern, is it a love story or children and optimism ?! there are mixes who are interesting for sure, but this is not the one.. as many who have said, Serbia should have stick to the first part of the song and make it Lane Moje – like, instead of going for the techno party second part, they could have used some traditional drums sounds.. Overall it has some interesting parts, but I would easily… Read more »

There’s nothing to decide here, it is simmply that specific kind of experimental music concept which group Balkanika does since 1998, you are free to not like it, of course. It represents Balkan as awkward mix per se, crossroads of many cultures through its history which have ”nothing in common”.
It is reflected in their other works ”Valley of tears”, ”Kermes”, ”Don’t cry”, ”Anathema” etc.
They could copy ”Lane moje” or Bregovic brass band ”explosion” of course, but they are not Zeljko Joksimovic or Bregovic, it’s their style..

I agree with Philip. That’s what I meant. I know the lyrics, I just don’t think they’re good. To me it seems to be a weird mix of lyrics, it seems a bit forced. And most importantly it doesn’t matches the music and the way they sing. On one hand, it’s supposed to be a love song. On the other hand, we have a man and two women singing and it feels like it’s supposed to sound ethnic and anthemic. I know it’s their style and I respect that. I just don’t like it that much, it’s just my personal… Read more »

Very slight changes indeed, but girl’s voice is amazing and looks like they have strong stage presence, can’t wait to see this live actually.

I can’t see the difference but ok

I like it, Danica’s intro part is kinda shorter, though I would make it even longer, I like that kind of singing, it nearly made me cry, but I guess this is more suitable for esc 🙂
I think this is kind of entry which we could see how it look like on big stage only, so good luck <3

People in the comments don’t know what they are talking about! Song is amazing. Just the music in this video is poor quality because of studio.

God this is even worse than the previous version… and so cringy. If this song was sung only by the dark-haired girl, this would be in my top 10… the problem is basically EVERYTHING ELSE. Sorry, but they will be lucky if they get a fifteenth place in the semi.

I don’t understand the hatred towards this song. This is my 4th favourite this year :/

Agree with you. This has been in my top 10 for a while, and I expect it to remain there, maybe move even higher. It’s sad that so many people seem to lead such miserable lives, some saying things about this song that I would never say about any entry. Well, I’m going to continue to love it regardless of what others think.

Top five for me, too. Although, my top five would be considered by most to be pretty awful.

What is your top 5 out of curiosity?

This is making me feel shaky, a kind of TREMBLING. It doesn’t warn me up. Leaving me cold

Am I the only one that likes this, I even have it in my top 10. I don’t have high hopes for qualifying since I loved Serbia’s last entry even more and it didn’t get to the final. Anyway I think the minor changes towards the end are quite nice and I’m glad Serbia are bringing their native language and traditional elements this year. 🙂

No final for Serbia again….

i hope they’ll sing it live at Eurovision at least

No matter the revamp versions of this song Serbia won’t qualify this year, the song is too weak…

Maybe their stage presence will surprise us