“Not all of you love Operación Triunfo.”

Those were the words of the Academy’s director — Noemí Galera — after the remaining OT 2018 contestants staged a rebellion earlier this week. Nicknamed ‘La Bronca’, Noemí reprimanded the up-and-coming talents and issued a necessary wake up call — one that many fans have been crying out for.

How has it come to this? It all goes back to Sunday night when the remaining contestants went on strike claiming they deserved more sleep. That was their response to the Academy’s recent ‘prohibition’ that bans contestants from going to sleep anytime before 10:30 pm.

Laying on the floor together and in silence, they decided to leave the 24-hour-round-the-clock audience with no coverage besides the dorm door. In their minds, their health and well-being is way more important than your entertainment.

As expected, Noemí Galera had a tough chat with them the following day. From ‘don’t take us as idiots’ to ‘there are more people outside who want to be here’, Noemí showed her disappointment with their apparently misplaced priorities.

The trust I put in you all has gone to hell, absolutely

But she’s not the only one who is angry. As Noemí made clear, fans are on her side.

“Your attitude pissed off your fans, the ones who will attend your concerts. What they saw [the strike, them throwing toilet paper and books out of the windows…] they didn’t like it a sheat”.

“Plus, the audience wants to get to know you all more. As soon as you get back home, nobody will see you [as they do on OT]. The signings are a freaking illusion, and you are all acting as if you are The Rolling Stones or Lady Gaga. Be yourselves!!” 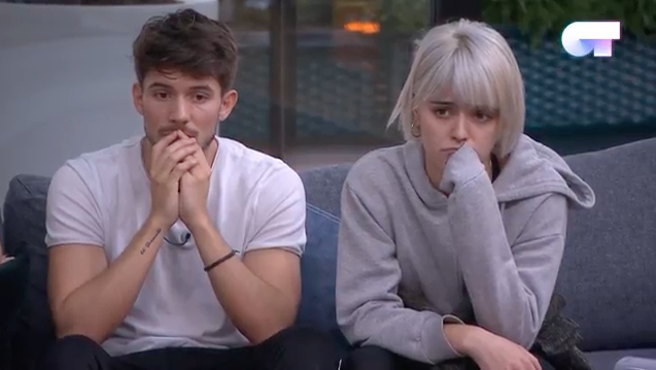 The contestants — such as Julia — clarified that they felt bad as it was out of context. “We feel pressured, we have been closed in here for two months, but we are having a hard time. We don’t have holidays. Sundays we keep rehearsing…”

Noemí was not amused: “You don’t have to explain how this show works. I have this pressure as well.”

Maria said “it was a joke”.,.and Noemí replied, “Don’t take us for idiots”.

“Be yourselves and don’t control yourselves with the cameras. And yes, this is a TV programme. If you want to study music, go to the conservatory where you will learn. There’s also a team behind [OT] who are giving their all and love this show. The feeling I have is that you all don’t love Operación Triunfo, and if you don’t agree on this, then leave.”

Well damn. Our mouths are on the floor following that honesty. Is yours? Who do you think is in the right? And who is in the wrong? Should the contestants be allowed to sleep more? Let us know down below! You did not get it. It was not that they prohibited the contestants to go to sleep early, but yhat they were unrespectful to the staff, and throwing away things through the window the night before.

Manufactured scandals… Scandals bring audience. In the end I have the feeling they’ll pick a bland act, just like those 2 boring faux romance singers who won…

I side with noemi. I mean the contestants knew what they were going into when they entered. And if theyre feeling that bad then they can just leave. No one is forcing them to stay

And also they get like 10 hours of sleep, and all they have to do is rehears. And it wasnt just the sleeping thing they were mad about, it was that they had thrown toilet paper and books out the window too the night before

look. there are ways and there are ways to tell things if they are not working out. I can not believe that making them read tweets full of hate one by one, making them cry in front of 80.000 people watching youtube stream was approved by a team of psychologists, like HOW IS THAT A GOOD IDEA? I honestly think this was all made as a way not to lose more audience than they have already lost . . . . the last gala was the less viewed of this edition, and now suddenly they were world trending topic, people… Read more »

In other words, trample on their state of well-being in order to increase viewership, eh? What good will that accomplish if the winner of OT fails (yet again) at Eurovision, or worse; withdraws before the contest in May?

I wish I could get into bed by 10:30. I don’t understand their complaints.

Dinner time at the Academy is at 9:00 pm

This is a joke. Eurovision is not the big brother. I don’t understand why you have to make them stay locked up in some apartment. I just don’t get it. what’s next? Master Chef for Eurovision?

The Star Academy format was never tailor-made for Eurovision, hence the winner of each season never necessarily wins the right to represent their country to the song contest.

In fact, the issue at hand does not have anything to do with ESC in particular.

Eurovision doesn’t need a star, Eurovision need a song. this Big-Brother like format doesn’t help either.

If this is how the broadcaster treats OT contestants then I don’t want to know how they treat their Eurovision contestants.

Why is wiwibloggs siding against the contestants’ health?

Meanwhile in the song writing camp…oh wait there is not such thing. Let’s torture some young talented singers until 2 of them will pretend they’re in love, and win the Eurovision Song Contest. Love Love Peace Peace.

Were they really tortured?

To not let somebody to sleep is literally a method of torture against prisoners during wars.

No, I meant that part you mentioned about couples pretending to be in love.

[And I actually thought they'd squeak into the top 10. Obviously I was wrong about that, by a light-year.]

Hugely successful? How successful is 23rd at ESC? :-/

ESC is not a measurement of success necessarily, especially if many of the alumni of last season still have their hands full with music gigs left and right.

That remains to be seen…

I’ve read an interesting counterpoint article where its author criticizes that things like these are used to place the entire blame of OT 2018’s failings on the contestants, ignoring TVE and Gestmusic’s part. For those of you who can’t read Spanish, I’ll translate some quotes: “It’s true that these kids lack the truth and innocence that last year’s class had. But, did we really think that, after a successful edition, they wouldn’t have learned a thing? Have we forgotten the second season? The third?” “It’s easy to attack these 20-year-olds instead of the true culprits, saying they’re not giving material… Read more »

The real reason is the contestants want to go to “bed” early because there are no cameras and microphones in the bedroom, so they are free to talk about everything they don’t want the audience to know/hear. They say they’re tired and want to go to sleep but on the next day talked about how they stayed up until 1-2 am talking or playing (Noemí even brought up that time they were out of the room late at night). The live stream ends at 11:00 pm, they have dinner at 9:00 pm, and by 10 pm most contestants are in… Read more »

Just pointing out for additional context: OT 2011 bombed so badly that its final was in Gala 5, with 13 contestants still left in the Academy.

The lack of sleep is a major health problem. They basically tell the alums to put their health in danger for ratings. The government shoud do something. Or put some nets under the windows like in China where they try do commit suicide because too much work.
How much time those reality tv shows will be around?

As far as OT is concerned, maybe a matter of weeks and no further if one or two of those contenders really do kill themselves! And if that happens, kiss Spain goodbye for 2019 and 2020, or at least for as long as it takes to put their scheduling and rehearsals on par with the actual ESC contest, and they consider the well-being of the contenders.

I’m sure Spain is a country that has laws about the hours of work for children, teenagers and adults. The alums must be very tired if they prefer to sleep instead of partying. Who doesn’t want to party? They really seem exhausted.

The OT top brass should be happy, if not grateful, that they are sleeping instead of partying. Sports stars in North America get chewed out by the coaches, the top brass and the press for partying when they should be resting before the next game; because in some cases, staying up all night is what got some players in trouble.

They decided to have the party in the bedroom.

With the age range of the contestants, they would be probably be too old to fall under child labor protection laws if there’s any in Spain, and are not employees working for a company. But since this is essentially a entertainment show format where there should be a guaranteed stipend the longer they stay aside from the eventual prizes for the winner (dinero y contrata), there should be some sort of protection regulations to guarantee their well-being. If anyone has a hold of what their daily schedule is like, we’d better assess why this is a huge issue in the… Read more »

They don’t go to sleep right away, but stay up late talking, playing or recording videos because there are no cameras or microphones in the bedroom.

If the fans condemned and abandoned them because they took a strike to fight for something they deserve/showed discontents with inappropriate policies, THESE FANS SHOULD BE ABANDONED (And apparently, a lot of OT fans belong to this category, unfortunately) I am sorry, but I DO NOT AGREE that the contestants are obliged to stay up late so that the fans could watch more of their interactions. Don’t tell me it is what showbiz is for. If they really treat OT as a serious, professional music competition, and if they really love these contestants, they should allow them to do things… Read more »

We are your overlords. When we say jump, you say “how high?”.
Nobody leaves a show like that with their dignity intact. I feel like the next Eurovision failure is already a done deal, no matter who wins, no matter what they sing. It’s Spain. And a format in search of a robot with no opinions or integrity.

Tea SPILT! Although it might only take the right song for the right performer, this isn’t the early 2000s Pop Idol era anymore. People are looking for something more outstanding and less cookie cutter, and this OT show doesn’t quite provide that.

Here’s the link of the drama that went down in the feeds. Grab your popcorn, kids.

I think the Irish JESC entry which claims that ‘Mom is dad’ was more shocking.

What are you referring to? Also wiwibloggs doesn’t cover JESC anymore.

Well it’s meant to be a nudge for them to maybe reconsider, it was nice to read about JESC too.
Also, the music video has Ryan O’Shaughnessy.

This apparently deserves an article.