They’re an indie pop band from Trinec and will sing “Friend Of A Friend” at Eurovision.

But before they get to Tel Aviv, Lake Malawi have been on the Eurovision PreParty circuit and in London took out time from selfies with their fans to talk to wiwibloggs.

Speaking with our Deban the band covered fashion credits, British accents, their journey to Eurovision and the outfits they’ll wear on stage at Eurovision 2019.

Lake Malawi on modelling: “It’s all about the music”

Speaking with the band, it becomes clear that for lead singer Albert while there’ve been fashion opportunities, music comes first:

“I did a photo-shoot for Timbaland that was featured in Shortlist Magazine…but other than that in the Czech Republic [whenever we have photo-shoots] it is always about the music. Shoots for Elle Magazine, all those photoshoots.”

Albert does despite this still enjoy the photo-shoot process:

“They let you look at yourself, like a magic mirror. I think you always find out something special about yourself when you see yourself in a picture, when you realise this is me and this is also me.”

British accents were also a topic of a discussion. Albert revealed many commenters have said it is “too much”. We say there’s no such thing as too much.

Understandably the band are tight-lipped about their staging for Eurovision.

Bassist Jeroným says the staging is a “secret”.

And although that line of inquiry ended there, Albert did reveal one thing: He will wear the yellow jumper he performed in at Vidbir.

“I’m wearing the yellow, sustainable fair-trade jumper that my sister made for me, she’s an up and coming fashion designer”

The band also touched on messages from people that live near Lake Malawi.

The group would love to perform in Malawi after Eurovision and even have an event in their sights:

“There’s a festival Lake of Stars – I want to go there!”

What do you think about Lake Malawi? Are you excited Albert will wear the yellow jumper? Let us know in the comments below Austria’s Paenda on “Limits”: “It’s time to stop judging each others feelings” 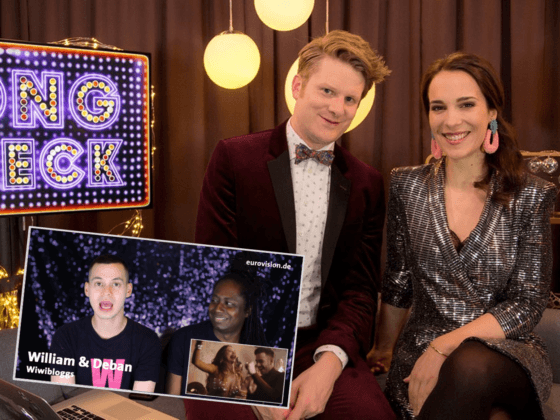 Oh i love his accent , he spent a lot of time in London thats why he sounds like that.

Czech Republic. They have not always been my favorite in the last few years, but I do want them to qualify every year. Because I was extremely surprised when they returned in 2015, despite their previous bad results. And their efforts finally paid off. I see Czech Republic as an encouraging Eurovision story . Their songs may not be the best, but I like their spirits. Hopefully Prague will host ESC some time.

It might be because I’m not used to british english, but at first even after a few listenings I was convinced he said “she was my night bird” and I freaking couldn’t figure out what the hell did that mean. Turned out it was “neighbour”. In exchange, I learned by heart both Bigger Than Us and 22 without even checking the lyrics out.
So, yeah, maybe it’s a tad bit too much? Maybe a little… forced? Just my impression.

To translate what he said to Deban: “How are you doing today, bro? You have cool dreadlocks. Nicely white teeth. I will touch your ass.” *giggles*… honestly, I think the last sentence was super inappropriate, especially when you consider that Deban does not speak Czech and had no idea what he said.