A week before the start of the 70th Sanremo Festival, RAI has unveiled the stage of the 2020 edition of the Italian kermesse.

The scenography was created by the 81-year-old painter and set designer Gaetano Castelli, who has taken care of the scenic aspect of Sanremo eighteen times since 1987. The last time was in 2012.

It’s an homage to the past — the sumptuous and somewhat baroque structure of many Sanremo editions of the 90’s comes to mind. It’s a little bit reminiscent of the Broadway style but at the same time looks to the future.

Castelli said: “My choice was to completely eliminate the automations, replacing them with volumetric scenographic elements designed to expand the stage space and acquire as much depth as possible. And in this space, I make the light dance.”

The central staircase, one of the iconic elements throughout the Festival’s history, has remained though it’s not as prominent. Castelli brings the orchestra back to the sides of the stage, in the pit, and has worked above all on the integration between several aspects of the show.

“The main elements and the backdrops contain, inside, video and lighting equipment that, for the first time, are fully integrated with the lights of the director of photography Mario Catapano. The scene acquires dynamism thanks to its sinuous shapes, the perspective devices and the synchrony with the musical rhythm of all the lighting and graphic effects, personalized for each artist and underlined by the dynamism of the camera shots directed by Stefano Vicario.”

Curious is the presence of numerous LED walls, which are little-used in the Sanremo scenography. This aspect strongly recalls Eurovision, as does the fact that, according to the rumors, many artists will use several parts of the stage, creating choreographic performances.

Speaking of the European contest: there is also a certain similarity with the roundness of the set design of Eurovision 2017 in Kyiv, Ukraine.

For a comparison with last year, let’s take a look at the minimal set design of Sanremo 2019, created by Francesca Montinaro.

As per tradition, seven days before the start of the Festival, Italian weekly listings magazine TV Sorrisi e Canzoni has published all the lyrics of the competing entries. The cover of the magazine is dedicated to the 24 Campioni, gathered in Milan for a ritual photo.

Standing out in the photo is rapper Junior Cally, protagonist of the bitter controversy of the last few days, with his sparkling red mask, hand in hand with Italian music veteran Rita Pavone.

It’s a significant handshake for a Sanremo that presents itself as a bridge between the tradition of the Festival and the modernity of new genres increasingly in national charts. What a beautyyyyyyyy ?Even better than the actual Semi Finals-Grand Final stage 🙂 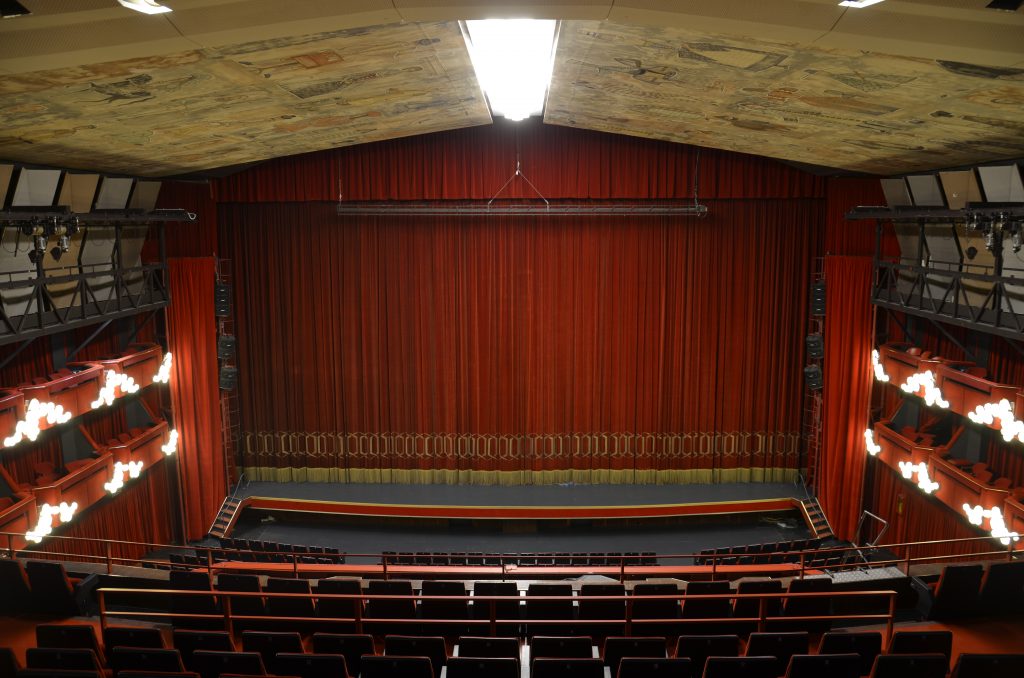 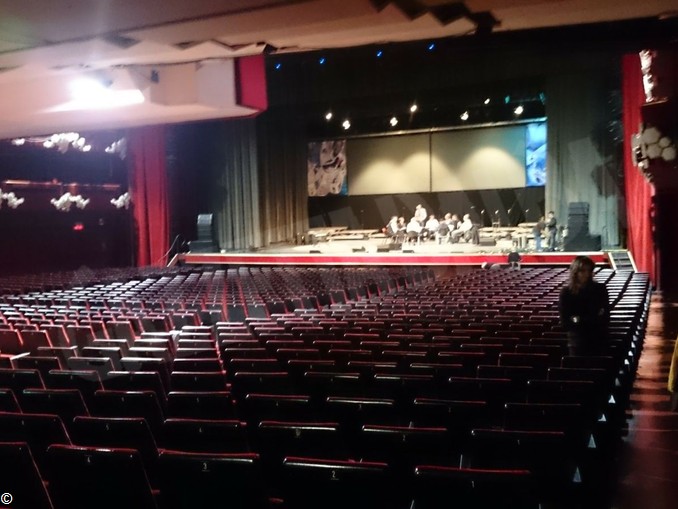 even if they are not the same, it reminds me of the scenography of sanremo 2002, what a good time! ehehe 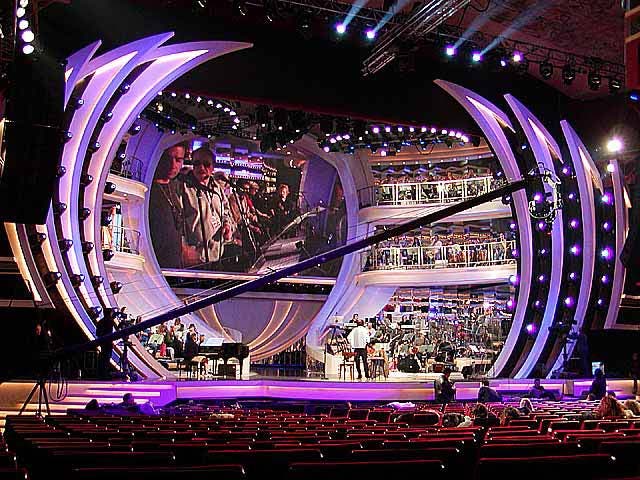 the set designer is always the same as Gaetano Castelli

ps I wanted to ask if it was possible to view youtube videos here? thx

Are italians starting to get intrested in eurovision?

No, bye from italy

Why? Do you hate eurovision or some other reason

we Italian don’t care about Eurovision. it is not a question of superiority and we just don’t care! we only like sanremo. 🙂

I think he/she is acting snobbish because someone commented below that an hypotetical ESC hosted in Italy could potentially be filled with “cultural-bragging-false patriotism” and he/she got offended. But I’m pretty confident I’ve already seen that username in a ESC forum so I wouldn’t be so sure about him/her not paying attention to Eurovision.

Also, it’s not true that Sanremo is liked by everyone in Italy. Young people tend not to watch it, for example.

it’s always me, and I’m italian.
I confirm that the Italians (just see the sales data of the songs participating in the Eurovision, and the television audience data of the Eurovision final) do not care about the Eurovision.
they are real data, while you want to make controversy.

you have a beautiful fantasy, you come out of your bedroom, there is a world waiting for you. 😉

Without disagreeing with you Sucof, I’m not sure it matters if Italian don’t care. You have such a superb national selection process that your entry is always going to be a of a high standard, even if it is not the San Remo winner. We’ve seen this since 2011 and before 1998.

I’m interested in, the Italians don’t.
I have been writing on wiwibloggs for 4 years.
and you are a troll who likes to argue. I don’t talk to you anymore. I do not give you this satisfaction, you go to vent with some other nation.
CIAO CIAO

I wonder what would happen if Spain, France or Italy wins. Do the presenters speak english at all then? Everything is dubbed there so i dont know how good they are in englsih. when i was in Italy almost no one could speak english

I have no words, I hope you are joking!
how old are you? please get out of your ephebic room too, in addition to sweden there is the rest of the world!
I always hope these stupid comments are created only for controversy, I don’t want to believe that these things really think!

If Italy ever were to host the contest, the hostess would most likely be the one from Dancing with the stars Italy, Milly Carlucci, she speaks proficient english, just enough to host the show. And I really do hope it will be in Milano, because of the Mediolanum Forum, Alessandra Amoroso had a concert there for her “vivere a colori” tour. It works for Eurovision. The question is, is RAI willing to host?

In Italy there are a lot of younger presenters who could speak english very well and could fit Eurovision stage perfectly, like Victoria Cabello who is bilingual, or Giorgia Surina or Camila Raznovich or Alessandro Cattelan or many others who came from MTV’s glourious days. Or actors like Pierfrancesco Favino or Alessandra Mastronardi and others, or singers like Laura Pausini or Tiziano Ferro and so on. C’mon guys, you act like with 60 millions inhabitants there can’t be people in the show business who can speak a decent english. Relax, we can find someone who speaks English, Toto Cutugno’s days… Read more »

When you have Gaetano that all these years came up with fresh designs, you are in it for a spectacular show.

Unlike the Florian guy that designes every ESC stage and it get boring as hell.

@Sebastien K It’s not old-fashioned, it’s called good taste and elegance. Words and ways of doing that are disappearing from the world!

” that’s a proof that Italy could do well hosting Eurovision, although the hosters might have an awful english and some cultural-bragging-false patriotism commentaries and attitudes, like if they were “the best” in the world”
I have no words for these sentences imbued with malice and stereotypes, we are in 2020!
tell me about the future and reasons like your grandfather!

Too much! Makes me dizzy.

From the angle on the picture it looks a bit tacky imo. It may look different from the audience though. But anyway, I’m really loooking forward to San Remo as usual:-D

You perfectly described the main concerns I’d be worried about if Italy got to host Eurovision. Especially the second one, I can already see our hosts bragging and exhibiting unnecessary patriotic pride. I might mute the whole show if such situations materialized.

Wow. Why doesn’t every Eurovision broadcaster attempt something like this?
Answers beyond the word “budget”, please.

Indeed. I just wish there was more similarity between National Final competitions, generally. Sweden do indeed make it hard on themselves, and they don’t necessarily need to. 🙂
More my question is about the lack of events in the UK, Ireland, France and Spain this year. It looks to me as: If Italy is able to put together something like this, then what is the matter with other broadcasters?

I wish I could give you any reason other than expense vs proft, but that’s what it’s about. The thing is that Sanremo is a firmly established event that generates large safe revenue every year, so they allocate a budget of several million euros to produce it. This doesn’t apply to most other NFs (not Melodifestivalen though) which were created in relatively recent time and are not followed as much as Sanremo, since they only serve the purpose of selecting their respective entry for Eurovision.

@Purple Mask Sanremo 2020 cost Rai 16 million euros and generated revenues for the public service for more than 30 million euros in television advertising. And every year advertising earnings increase. It is normal for Rai to focus everything on this event.
it’s our superbowl 🙂

Exactly. Someone please laminate this article and then post it to Lorraine Kelly and co when they complain that the UK have finished 26th with seven points. When counties put so much effort in attention to the just the set of their selection competition, it’s not surprising that the wipe the floor with those who take less care.

I think it looks too extravagant but since this is a special edition of Sanremo they decided to go all out, I suppose.

LEDs? Sold! Looking forward to it.

I don’t want to sound too harsh or too pro-Italy ( more than usual I mean), but Sanremo’s stage looks way better than Mello’s

Not harsh or pro italy, just the facts 🙂

Not a very fair comparison since Melodifestivalen stage has to be transported to different locations and IKEA’d every week.

Wait until Rasmus hears about that!

Why talk about Sweden in EVERY article? This is Italys article. I dont know why Sweden is here. I would like more news from Croatia,Slovenia,Serbia,Ireland,Switzerland for example. Im a swede but its TO MUCH SWEDEN.