In May, Ukraine group Go_A will represent their country at Eurovision 2021. But before that, the electro-folk band has released their new single “SHUM”. And it briefly got fans wondering if this could also be their Eurovision 2021 entry. However, the delegation has since confirmed that it is not their song for Rotterdam

After honouring melodramatic Carpathian folk tales with techno and EDM last year with “Solovey”, Go_A have opted for a somewhat darker style in “SHUM” (“ШУМ”). They describe its meaning as “to awaken and summon spring and hasten the awakening of all living things after winter”.

In an Instagram post, the group told their fans that they created a “new form of an ancient magical ritual” with the song.

The music video for “SHUM” debuted this morning and it features the group and friends wearing PPE chic. They are clad head to toe in protective gear, including hazmat suits and face masks. Frontwoman Kateryna Pavlenko still manages to own her performance — she’s wearing a transparent face sheild.

Go_A told their followers on Instagram that the song was inspired by folklore of the Polissia region of Ukraine, which stretches from the northwesternmost part of the country to the northeasternmost part.

Earlier, the band said that their quarantine period had inspired them during the creative process. This also becomes clear from the further descriptions they give about the song as they write on Instagram:

“In 2021, this ancient tradition takes on a different meaning. During the lockdown and in full gear – we remind everyone and ourselves about the need for a person to be into society, to feel part of something bigger and not forget to rejoice.

Our new release is all about the integration of the archaic into the present.”

In an earlier interview to Fakty, Go_A’s frontwoman Kateryna Pavlenko said that the group was following a mission to promote the Ukrainian culture on the world stage:

“We absolutely want sing there in the Ukrainian language, to honour Ukrainian folklore and to show, that everything Ukrainian is cool, interesting and is there to love. Not to continue to think that the Ukrainian language, the song and folklore, is something second-rate and has no meaning. We want to increase the focus on our culture and roots, after all it is very important. We aspire to broadcast our love to all the other Ukrainian people.”

Update at 10:40 CET: UA:PBC’s official Eurovision account on Instagram — @suspilne.eurovision — has confirmed that “Shum” is not Go_A’s song for Eurovision 2021. Answering a fan question on a post promoting the single, the delegation wrote: “It is just a release of a song, but not for Eurovision. For Eurovision is later on”.

So far, “SHUM” has not been officially confirmed as Ukraine’s entry to Eurovision 2021, by either the Ukraine broadcaster or by the EBU. And while Go_A have given fans a lot of information about the meaning of “SHUM”, they are keeping quiet about whether or not the song will be their entry for Eurovision 2021.

However, back in November, the official @Eurovision account posted a video to Twitter . It showed Go_A hard at work in the studio, recording a song. It’s now clear that the song in the video was “SHUM”.

Check out this exclusive footage of them in the studio, where they may just be recording their song for Rotterdam ?#Eurovision | #OpenUp pic.twitter.com/vsW9zsMn6p

The official caption for the video noted that “they may just be recording their song for Rotterdam 😏” From this, it seems that “SHUM” might indeed be their Eurovision entry… or it might just have been another song recorded at the same time.

There is another issue though — as things currently stand, “SHUM” is 3:59 long, almost a full minute longer than the maximum length allowed in a Eurovision entry. But it’s not entirely unknown for a song to be released in a longer version, then cut down for a shorter Eurovision version. Francesco Gabbani’s “Occidentali’s Karma” was originally 3:38, while Amir’s “J’ai cherché”. However, one minute is a lot to cut from a song.

Go_A frontwoman Kateryna Pavlenko previously announced that the band’s Eurovision song would be presented “somewhere in February”. And while it isn’t February yet, it’s not far off.

Wiwibloggs has reached out to Go_A to clarify the situation but the group is keeping shtum about “SHUM”.

What do you think of “SHUM”? Should Go_A take a cut-down version to Eurovision? Should they use staging inspired by the music video? Tell us your thoughts below! 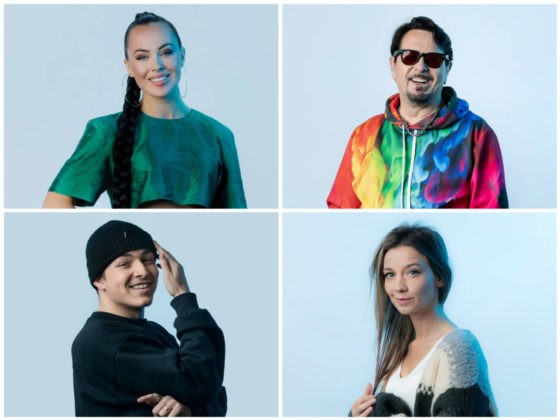 It’s great! Really enjoyed this piece and the way Go_A are blending traditional and techno sounds, it’s both mesmerisingly haunting and irreverent at the same time. Very excited for their entry reveal.

This word isn’t slang but the normal term for hemp/cannabis plant. It’s quite commonly mentioned in folk songs as it has always been used and cultivated in Ukraine for a variety of purposes, mainly to produce textiles and ropes.

This song would be an instant top 10 finisher, perhaps even higher. I just love it! I hope that the song they actually picked for ESC is just as amazing. Otherwise, maybe consider shortening this one and sending it. Still, after Solovey and Shum, I do have a full confidence in Go_A. 🙂

Last edited 1 year ago by Colin
15

This is so catchy!! I like it even better than solovey! 🙂

I guess this song was written for ESC as this motive we heard in the post about them on the ESC channel. But maybe Ukrainian broadcaster banned this song like Maruvs or they wrote better material. But its an amazing song!!!

why would broadcaster ban thir song?and they don’t have such a power anyway,
can people stop spreading nonsense please, ugh!

Last edited 1 year ago by Bonny
8

I wrote my assumption)

They are just writing a few songs at the same time as they said before. I think they will release all the songs and then internally choose the one for ESC.

I would love if that was the one. In any case, it only reassures me that I’ll probably like their song again.

I like the song and the dancing. I’m over the thespanishforcrown look.

Thank you, trying but not really!

Another good song by them. Their sound is really unique. We need more acts like Go_A for ESC.

Exactly, they are amazing. And Onuka and The Hardkiss too. Ukraine has too much great and original music. Ukraine and Estonia have the most interesting music scene in Europe for me. Pity, that the most interesting songs are not winning national finals often. We dont want Ukrainian and Estonian girls with Swedish songs, we want your original and absolutely fabulous real music in ESC!

Onuka for Eurovision, but I guess she won’t do it.

This is OT, but Miki released music video of his song called No M’ho Esperava (I didn’t expect it), the song is about his experience in Eurovision 🙂 https://www.youtube.com/watch?v=3LEOkTgs3oo

Eurovision introduces you to all kind of bands and artists. I have become a Go_A fan. Go on Go_A and give us a top song for the competion 2021! I love this song but I think for ESC you need an even better one to compete 😉

Unless the eastern block saved them—I don’t think this kind of sound would win over the judges. We saw what happened to Tulia.

I believe that Tulia is a good comparison. Both were strong songs. Remember, Tulia were the most successful Polish act if we consider just the jury votes.

Tulia came 11th with a great song and were incredibly close to qualifying. I see no reason why Ukraine could not go further.

What a great piece of music. Its by far the best thing i’ve heard in this year’s eurovision preseason. I’m really sad its not their song for Rotterdam (keep in mind that i didn’t like solovey at all). Great fit for my playlist though ??

This song is top.

Such a shame that this is not their entry for Eurovision. We need some techno in the competition! I was feeling the Felix and Tomcraft vibes. Their outfits even remind me of Altern-8.

I really hope that their actual entry is in this vein – there is a niche in the competition for this type of entry.

So so sad that this is not their eurovision entry. It’s so experimental and unique.
I’m literally obsessed with the song

Too bad. The song is amazing. Would have been great for Eurovision!!!

I’m obsessed with this song. Listened to it like ten times in the last hour already.

wish it was their entry, but if this is the high standard they are already at then I am extremely excited for what they will bring

Too bad. This song is amazing!

This song slaps. Would be a great Eurovision entry if this is their song!

Wow i didn’t see that coming AT ALL!
This is amazing!

Folk rave? Fantastic. I hope this is their song for Eurovision. The only thing that’s questionable are the long cuts in the song. That’s not a great thing for attention span.

This is SO GOOD. Take to a Ukrainian rave, please!

It’s a good song but cutting out more than 20 seconds of a song tends to leave the ESC product feeling choppy and incomplete.