The second heat of Lithuania’s Pabandom iš Naujo! 2022 was filmed on Monday 10 January. This means we now know the next eleven acts who will appear in the televised broadcast on Saturday 15 January.

Once again the number of acts in this heat is only 11 and we now know why there has been one less act in each heat than intially expected. National broadcaster LRT has confirmed that Eurovision 2015 alum Monika Linkytė and The Voice of Lithuania star Artūras Aleksiejus-Alekas have withdrawn from the competition

Nevertheless, let‘s get to know some of the artists who are competing in heat two a little bit more.

Viktorija is a singer and songwriter who has competed in several music competitions in Lithuania but this is her first time trying her luck in Pabandom iš Naujo. Her entry “Piece of Universe” is quite a mysterious song and is written by Viktorija herself. As we saw from the first heat, the new comers are definitely the ones to watch in this year’s preselection.

Alternative metal band Clockwork Creep, led by lead singer Paulius Mscichauskas, will bring some grit to the preselection. “It is very difficult to create a good rock song that everyone would like. But Rammstein succeeds – even fans of pop music listen to them. While most metal music remains a niche thing, there are still songs that many like”, Paulius told LRT.

Emilija Katauskaitė is a singer and vocal teacher. After graduating from law school, she decided to pursue a career in music and has transformed into an elegant professional performer. With more than 10 years of stage experience, she captivates viewers with engaging performances.

Titas and Benas – “Getting Through This”

You might remember this cousin duo from last year because Titas and Benas reached the semi-final in Pabandom iš Naujo 2021. This time they are back again with another powerful song, which should be a power ballad. The cousins do write their own music so their entry should be personal and strong.

This girl group is very well known in Lithuania‘s national selection as they always bring something fresh and unique. Akvilė, Giedrė and Monika will definitely bring the party to the Pabandom iš Naujo stage with their song “Washing Machine”. It‘s an upbeat pop song written by Michael James Down, Will Taylor, Primoz Poglajen and Natalie Palmer.

Natalia Kharetskaya, who goes by her stage name Cosmic Bride, is back again in Pabandom iš Naujo with a song that has a very interesting title – “The Devils Lives in Spain”.  Her song is a personal story inspired by an old Spanish myth.

Moosu X are a music producer duo from Lithuania consisting of Justas Kulikauskas and Aurimas Galvelis. “Love that Hurts” is about loving ourselves, loving others and allowing everyone to shine. Moosu X also wrote Gabrea’s songs as well as Urtė Šilgalytė’s entry, which qualified to the semi-final from heat one last week.

Ieva Zasimauskaitė – “I’ll be There”

Ieva is back at the preselection after already representing Lithuania at Eurovision 2018 where she placed 12th in the grand final. “I have said that if I will feel that I have to go back to the competition, I will do so. And so I felt it with this song and now I am here” says Ieva. Will this song be about her new love? We have to wait and see.

Tune in on Saturday 15 January to see who will be the second six qualifiers from this heat of Pabandom iš Naujo 2022!

Who do you think will qualify? And which song are you most excited to hear on Saturday? Let us know in the comments below. 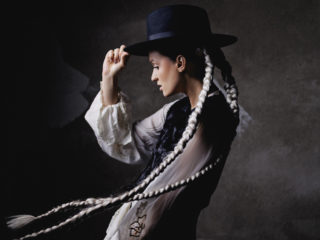 Love Ieva…. hope to hear something special as in Lisbon. But Justè has already caught me…

I agree. It definitely sounds like one of the better ones for this heat and national selection overall so far.

So far my favourite in Lithuania. But I like Emilijana and Moosu X too.

I liked Viktoria’s song and this year I can actually vibe with Titas & Benas, which definitely hasn’t happened last time. But the best song coming from Pabandon is naujo I’ve listened so far is “Love That Hurts”. Moosu X is bringing the sort of modern pop I’ve been liking a lot in the last Lithuanian selections (and they already wrote my favorite track from the 1st heat). Hopefully they’ll be great live.

Since this article was published, Titas and Benas and Just? Kraujelyt?‘s songs Have been released. If Majority of the heat two songs are released on the eve of the second airing, I could do a little review.

I love piece of universe.. hope for the best

From released songs of Heat Two: Moosu X – “Love That Hurts” Queens of Roses – “Washing Machine” Emilijana – “Illuminate” Viktorija Kajokaite – “Piece of Universe” Clockwork Creep – “Grow” Not released yet: Gabrea – “Make it Real” Juste Kraujelyte – “How to Get My Life Back” Ieva Zasimauskaite – “I’ll be There” Cosmic Bride – “The Devil Lives in Spain” Justin 3 feat. nanaart – “Something that is Natural” Hoenstly, I think Clockwork Creep overdid it because there is a line between eccentric and disgusting – their videoclip is simply disgusting. Viktorija Kajokaite seems to have a weak… Read more »

Yeah, that’s not Their PIN entry. That’s one of their older songs.

As of right now, Piece of Universe, Make It Real, Illuminate, How to Get My Life Back, Getting Through This, Washing Machine,and Love that Hurts are out right now. Grow, I’ll Be there, The Devil Lives in Spain, and Something that is Natural aren’t out yet, though keep an eye out in the next couple of days.

I think Love that Hurts is my favorite song from this selection so far. It has these musical transitions that you don’t see very often and it’s really engaging even just as an audio track. I really hope it will be staged well because there is a lot of potebtial in my opinion.

Love that Hurts is also my favorite song for Lithuania’s selection so far out of the songs that are already released, and there’s still more to go. It feels like the best song so far compared to the already released songs, but we still haven’t gotten songs from the most anticipated artists yet so we’ll see how long it can it maintain status as one of the “best” songs. I am actually surprised that it will be closing out heat 2 (as of now, though the running order could change as the article states) because that’s usually reserved for either… Read more »

They’re not closing the heat. Queens of Roses already stated on their instagram that they will be the ones, who got that numer 11 in the upcoming show. The running order how they prerecord the performances is not the actual running order of the show

(looks like LRT tends to choose disaster bops as show closers, since Erica Jennings closed the show 1 and Queens of Roses will close the show 2)

The thing is… he’s not actually closing the show lol

So If this isn’t the official running order for heat 2, why is it published like that? When will it be actually released? As Ungius posted, Is this actually the order of how the performances were recorded? I do find the articles caption amusing of “don’t Quote us on this running order, it could change like last week.” I’ve seen this order listed as the official heat 2 running order on a couple other Eurovision new sites, But shouldn’t the primary source, LRT, clarify That this isn’t it, or actually post the real running order? It can get confusing., Well… Read more »

LRT does not reveal the running order, anywhere. When the first heat was being recorded, LRT released an article and showed Elonas Pokanevi? opening the show, but in fact it was Auguste that opened. So there’s absolutely no way of knowing the actual running order until the show airs.

I don’t know why but when I click on an article that includes songs from Lithuania I fully expect it to be a hot mess. While some of these songs are pretty sub-standard I actually enjoyed the song “Washing Machine” and the song “Love that hurts.” I started to think about the staging for “Washing Machine” in particular and I think the soundtrack and the tempo might be able to get the crowd into it. Also, it’s three stunning women so maybe they will have another Hurricane-esque moment on stage.

Well, at the moment, there’s only four songs from this heat that are out right now, so we can’t really judge the whole heat until all the songs are out. Although cosmic bride’s song will be out in a couple of days, And it looks Interesting, although that doesn’t always mean good.

Is it just me, but in the Trypich photo, is that Ieva behind a piano? Maybe we’re getting a piano ballad from her, and it’s a very classic staging.

I swear every comment you write is “let’s not judge yet”.
Speculating is part of the fun. Calm down.