Out of the light, like a star, like a hero, Charlotte Perrelli recently announced that she may make a run at Melodifestivalen 2012.

Perrelli—who won Eurovision in 1999 with “Take Me To Your Heaven”—could use a pick me up. The past few years haven’t been kind to the 36 year-old (yes, she’s only 36!). After finishing a disastrous 18th at Eurovision 2009 in Belgrade, Perrelli divorced her unfaithful husband and came down with meningitis.

But now she’s feeling good and says she’s ready for the public to embrace her again. “I’ve said I wouldn’t take part again, but it’s so freaking fun, so I don’t know,” she recently told reporters in Sweden. “I’ve gotten requests and offers to work with some of the best songwriters. So of course I’ve become at least a little bit keen.”

Eurovision isn’t Perrelli’s only priority right now. The shemale singer is criss-crossing Sweden with “Diggiloo“—an annual tour that features Sweden’s top musical acts and inevitably includes a number of stars from Eurovision and Melodifestivalen. She’s also getting herself in top form ahead of the 2012 release of her very own fitness book. Talk about milking the cow for all it’s worth! 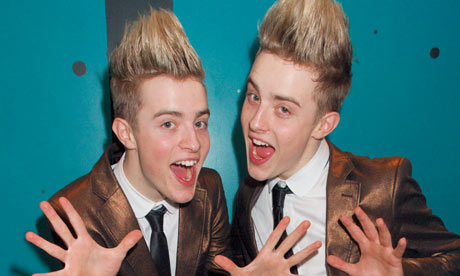 Jedward to Big Brother: You Can’t Cut Our Hair

I’m gonna have nightmares with that picture. Happy now?