Jedward have won Ireland’s Eurosong 2012 contest, winning both the jury vote and the public vote with their song “Waterline.”

The results became rather clear rather quickly. Of the five regional juries, three ranked the twins first, while the other two ranked them second. After the jury votes, Jedward had 54 points, leading both  Donna MacCaul (“Mercy”) and Andrew Mann (“Here I Am”) who stood on 44. The public vote made Jedward’s victory official. They earned first place (and 60 points) from the public, while Andrew Mann (“Here I Am”) captured second place (and 50 points). Donna could only muster third place (and 40 points) in the public vote. The boys aren’t blasé about their second run at Eurovision. They burst on to stage after their victory and shook and jumped and generally inhaled confetti. “We’re gonna stay focused. We are back! Return of the Jedi,” the boys—I can’t tell them apart—shouted on stage after their victory. “We just wanna thank everyone who voted for us. I wanna thank Linda [Martin] for picking us! I want to thank everybody. I want to thank Louis Walsh. What’s up? You’re at home!” 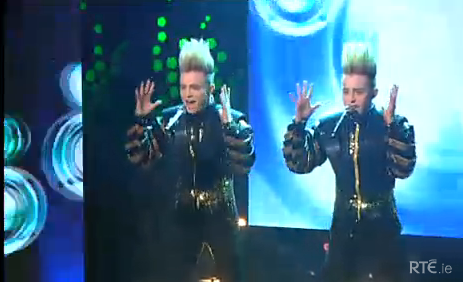