Even before the semi-finals of Junior Songfestival had started, Julia van Bergen emerged as our readers’ favourite to win with her song “Around”. And win she did, earning top marks from the kids jury, adult jury and televoting public in the Netherlands. She recently caught up with Renske ten Veen, one of our Dutch correspondents, to talk about her journey, her song, and what we can expect in Malta.

Hello Julia! First off: congratulations with your win at Junior Songfestival in the Netherlands! You looked really surprised when you won. When did you realise that you had done it?

Thank you! It’s still very difficult to contain, but I realised it when I received the trophy in my hands. 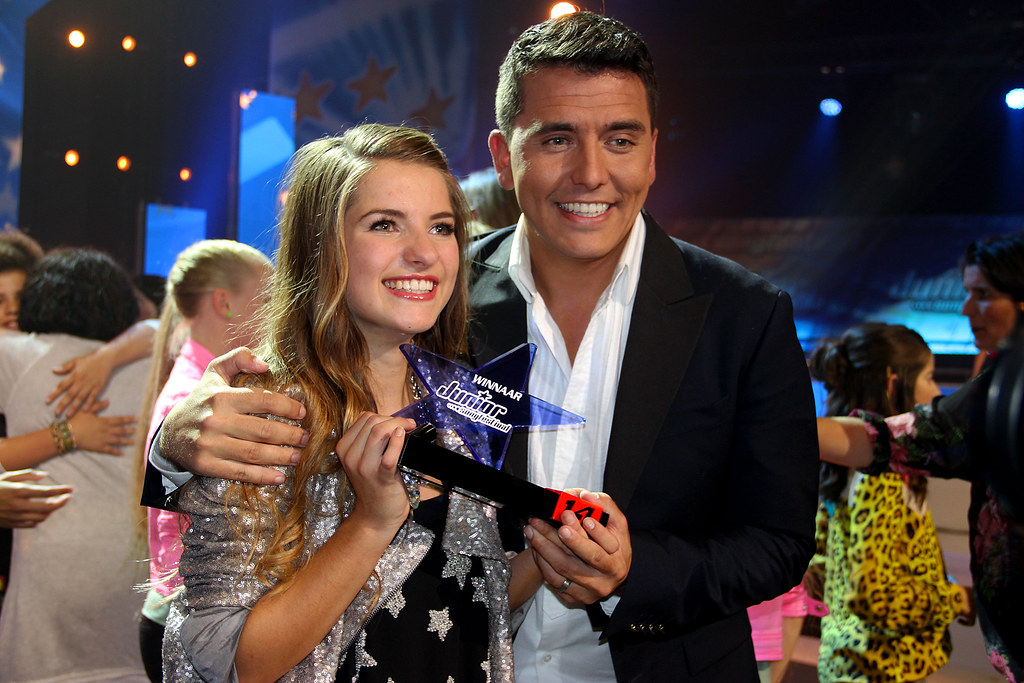 How did people react to your winning?

Super nice! Of course there are also less nice reactions, but the positive ones exceed the negative ones, so that’s super.

What did your classmates and friends think about the fact that you’d won?

My friends were very excited and they even came to the final! My class is also a bit excited, but most of them are fifteen or sixteen, so don’t really watch it anymore.

When and why did you decided to take part in Junior Songfestival? And what was your inspiration behind “Around”?

I decided at the last minute to sign up, just to see how far I could go, as an ordinary girl without singing classes. The inspiration for the song was something I experienced with my ex-boyfriend two years ago.

At first “Around” was a slower song with a piano. How and why did it became an uptempo dance track? And which version do you prefer?

I think it has changed so much to make it much better and more “à la 2014”. To be honest I can’t choose a version that I like the most.

What did you think when Jan Smit suddenly stood in the city hall of Zeewolde with a drumband to tell you that you had gone through to the final?

That was soooo cool!!! I didn’t expect it at all.

Your act features a lot of dancing. Are the same dancers from the national final going with you to Malta?

Yes, the same dancers are going with me. Except for one, he’s sixteen, so he’s too old. That’s too bad. He’ll wave us goodbye, but he wanted to go with us, of course.

Are you going to miss everyone from Junior Songfestival?

Yes, very much! I hope that we’ll see each other soon, I especially miss the recording days and the cosy times!

What do expect from the Junior Eurovision Song Contest in Malta?

I don’t expect that I’m going to win, but I expect that it’s going to be a very nice time and that I’ll gain a big experience!

Can you tell us something about what your act will look like in Malta?

It’s a surpise! [Laughs]. The only thing I can say is that it’s going to be awesome!

Have you listened to the other songs in the contest in the meantime?

No, I haven’t managed yet, but I will do it soon for sure!

You’ve already said that Ralf’s “Click Clack” is your favourite Junior Eurovision song. But why that song?

Because the song is very original and he can dance very well!

Then I think I like “Teenager” by Rachel too.

Do you want to take part at Eurovision later?

Yes! It would be amazing to take part!

What kind of songs do you want to make when you’re older?

All kinds of everyting: pop, dance or calm songs! In English or Dutch.

Do you have any hobbies besides music and singing?

Dancing! That’s one of the best things in my life!

Do you want to say something to the readers of Wiwibloggs?

Thank you very much! Have fun watching the show, enjoy it and I hope that I as representive of the Netherlands can make you all very proud!