In November 2014 news broke that the incredibly talented Loïc Nottet will represent beautiful Belgium at Eurovision 2015. If you haven’t already heard, the boy has got a fierce set of pipes on him. It’s one of the reasons he finished as runner-up on last year’s The Voice Belgique.

In May, Europe will get to indulge in the incredible range Loïc has to offer. But until then we’ve been enjoying his cover of Sia’s “Chandelier”. Looks like we aren’t the only ones! Sia — the incredibly well-known Australian singer-songwriter with a thirsty blonde bob —  has spotted Loïc and is gagging for breath!

This is incredible cover and video and choreography of chandelier http://t.co/dCtHTxlX0O

Could this foster a new musical relationship between the pair, and in time for Eurovision? Sia has already written smash hit songs for Beyoncé, Rihanna, Christina Aguilera and Eurovision’s own Celine Dion. Perhaps she can lend a hand to Belgium and Loïc for their entry in Vienna? He’d certainly do her justice… 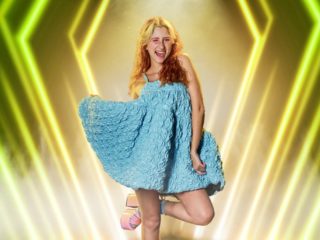 Loic is of course a great dancer and a great vocalist – but am I the only one who didn’t get the point of this video?

Well, Loic Nottet’s cover seems (and sounds) like a parody.

lol i thought there was proof that she was gonna work with him for Eurovision! misleading title!!!!

It would be great if Sia writes the song for the UK entry.

Sia’s involvement with Loïc Nottet at Eurovision 2015 will be another Australia-Eurovision connection. (Any chance of Jessica Mauboy and Axel Hirsoux doing a duet??). 😀 😀

Belgium will be in the final this year. I have a feeling about it. But not higher than 15th place

Could Belgium threaten victory in Vienna? Is it Brussels/Antwerp/Hasselt 2016? It could be…….

I love this version and really enjoy his voice!! Can’t get enough of it.

Gotta love the media, making big speculations out of something as little as a casual tweet. I would LOVE it though, I don’t deny it, but I think is highly unlikely.

I used to love Chandelier. Then it was played everywhere.
Anyway I just hope they send him with a good song that shows of his vocals and range and not give3 him a song like 2013 where the singer can barely sing it.

This would be amazing! Sia makes very good music! If this will happen, I think Belgium will land in the Top3 this year!

that would be so amazing!

Would be great… but at this point she just said she likes the cover, nothing points out that shes writing a song for him. But hey, we can still dream about it haha

It is a big leap from Sia tweeting to Sia writing a song. Nice dream though. Sia writes amazing songs.

Good idea. And if this happen, their entry will be bilingual, in French and English (since Loic is in the French part of Belgium).

You know you’re speculating at this point?

If this does happen, Belgium might be a real contender for a top position 🙂