With the 60th Eurovision Song Contest just weeks away, it’s now clear that Vienna will celebrate the Diamond Jubilee in spectacular fashion. They’ve already promoted the contest with artwork and logo on trains, buses, trams, taxis, billboards, and an airplane. Now they’re taking their “Building Bridges” them a bit more literally with the Eurovision “Bridge of Fame”.

THE “BRIDGE OF FAME”

The “Copa-Steg” floating pedestrian bridge connects mainland Vienna with the Danube Island (Donauinsel). It’s always given folks a route across the city — and now it’s giving them a path through Eurovision history. Every Eurovision winner now has their own commemorative panel, with a photo of them and some information about their entry. Passersby can take a photo of the QR-Code and immediately listen to that contestant’s song. 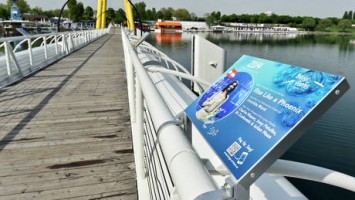 When the sun sets, Eurovision comes alive. Just ask anyone who has been to EuroClub! To keep the celebrations going at night, the Uniqa Tower will light up with the Eurovision 2015 logo at night. More than 40,000 pixels and 160,000 individual LEDs will transform the glass skyscraper into a monument to ESC. Ann Sophie: “When everyone becomes one on stage, that’s your inspiration”

Misread that as ‘Quinoa Tower’.

Vienna do really great work! They turn Vienna to a Eurovisioncity! I really like what they did! Can’t wait for Eurovision in a few weeks 🙂 Wien kann es einfach 😀

You could almost say that LED lights are flashing on towers.