We’ve known that Kaliopi will sing for FYR Macedonia at Eurovision 2016 since November. A few weeks ago it was revealed that her song would be called “Dona”.  And now we’re finally getting to hear the track.

The song premiered earlier this evening during a special show on MRT, the country’s public broadcaster. Once again, Kaliopi has teamed up with her ex-husband and long-time writing partner Romeo Grill.

Kaliopi is a veteran when it comes to Eurovision. She’s entered the contest twice before – first in 1996 and again in 2012. She failed to make it past the pre-qualifying round with her first attempt, but her second effort proved to be much more successful. “Crno i Belo” (Black and White) placed 13th, giving FYR Macedonia its second highest result ever.

When we recorded the song “Dona” we knew that we have a special song. A great song like that usually carries important message. Dona is the essence of the song. Dona that keeps me safe. Dona that gives me strength and Dona who gave me the power to touch millions of hearts with my voice. For each of us at some time and moment in life there is – Dona. This is a great song that carries a great message.

Before the song’s reveal, MRT treated us to a montage of Kaliopi’s Eurovision 2012 interviews, including a snippet of her and Deban dancing to “Save Your Kisses For Me” at the London Eurovision Party. You can watch the full interview below.

What do you think? Can “Dona” replicate the success of “Crno i Belo”? Let us know below. Romania: M I H A I blames jury, vows to never return to Selectia Nationala 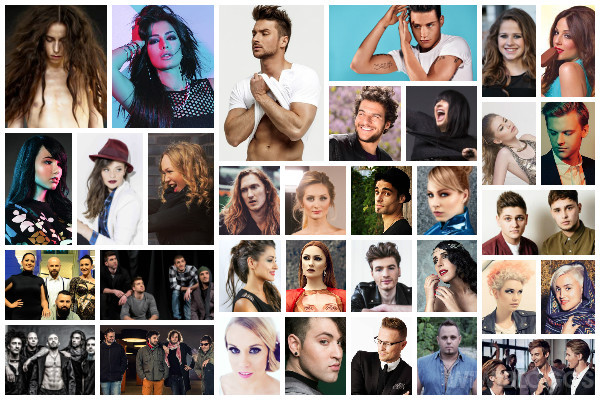 Quite like this- should qualify and be top 15 in final.

@mawnck: As someone who has written songs myself, I can say it’s actually really easy to inadvertently write something which sounds like another song. However, as a musician I really could not imagine a plagiarism case even having the slightest chance of succeeding because it’s really easy to repeat the same single note over and over again with the same word, then drop to another note and keep repeating the word with a different backing chord. The probability of the two notes being the same and the two chords being the same is very, very high, especially given that this… Read more »

It sounds like brazilian gospel music.
Crno i Belo was better :/

I actually did fall asleep listening to this song.
For what I remember, it sounded OK.

This is a beautiful song, and I love Kaliopi’s voice. But… the song and video are quite dated. I’d be surprised if this made the left-hand side of the scoreboard, although it might just qualify for the final if lucky. x

Old Fashioned, well call me old fashioned, but i like this very much

she’s a singer, who sings from the heart, with a lot of passion and emotion into her songs

i like the violin orchestra music, which really lifts her stunning voice

and she seems quite a nice woman, and a really good live singer

Well Kaliopi had impressed me in 2012 with crno I belo and her powerful voice that had “completed” the song. This year I doubt if she can make it to the final cause dona belongs to 90s. Extremely old fashioned and repetitive. I wasn’t expecting that coming….. just avarage 21/33

@I’ll be back
Not at all. That’s what I noticed too!!! Especially 1:13 sounds exactly the same!

She is a great singer but this music and video is really corny.

“Feel” has nothing to do with songwriting. You can’t just take the hook line from a major hit, slow it down, and say it’s a different song.

Unlike with most Eurovision “plagiarism” situations, the publishers of Karma Chameleon have a case here, should they choose to pursue it. (I doubt they would unless “Dona” somehow becomes a bonafide hit.)

omg, Kaliopi has done it again for me, and really respect for her, 49 years old and really having this great voice, the song is catchy as well

and although it’s in macedonian, i feel the emotion in the song, and Crno I Belo was my favourite from her

goosebumps all over me, i hope people vote for her, as she is in semi final 2, which i cannot vote in

for me the best song i’ve heard so far

OH MY WORD!!! In a perfect world, this should WIN! Absolutely incredible.The depth, her voice, the emotion, and it’s catchy too! I loved her in 2012 and I love her in 2016. Really hope she makes the top 10 or 5… It would be a shame if she doesn’t. Love from South Africa. 🙂

I am sorry but coming back to eurovision with a song like this she is either using eurovision to promote her music to reach wide audience or she is mad, dona dona dona dona dona lol, last time she said in one of her interview that she had an operation which affected her voice therefore the faulty voice can have impact on her vocal, the voice does heart my ear a bit especially with dona dona dona rush on her own to reach audience but will audience reach her lol

wow, what a snoozefest.

@mawnck: that seems more like a coincidence than anything else… the two songs don’t have an even remotely similar feel, and it stops being the same melody when the relevant word stops repeating.

People are really negative towards this one, I think we need to remember that Crno i Belo wasn’t anyone’s favorite in 2012 either…until we heard it live. I’ll wait until I hear this on the Eurovision stage to make me official judgement.

Crno I Belo had that scream which was probably be one of the reasons why Kaliopi advanced in 2012. Now why does Dona has no scream this time?

Sigh … All these comments and no one has noticed …

I also would add that it to reminds me of Italian entries from the 90’s, and I doubt it will reach the same heights as Crno I Belo

Crno I Belo was much better but that was to be expected.
But Dona isn’t to bad either. O.K ,nice melodramatic entry that even has an evergreen style to it. Or old-fashioned as some might put it.(
But I like it. it’s Kaliopi who lifts the song and without her the song would have been average. Should qualify but don’t know if it’s top 10 material..

I was expecting a lot more from this. The church organ wedding theme makes this feel very early 1990s. Kaliopi needs a more energetic song to suit her powerful and edgy voice. This is why Crno i Belo was a good song and did rather well. Dona will probably stay in the semi finals.

Does she specialize in screeching/80s songs? cuz that’s what im getting.

second to last after poland. shes lucky she has serbia, albania and bulgaria in her semi……

Nothing unexpected.
It will not be many people’s favourite song but it should be at the bottom ends of the top tens enough to get some points. Based on quality so far, this looks like it will get the majority of the Yugo votes.

I might be a bit biased here, but It is a song that reminds us all about the good old days …. Not everything can be a Swedish product.
It is good in It’s own lane, and that’s what makes it different.

I’m out of words. LOVE IT! This will qualify, im sure.

What a really cool and modern song, and what an amazing video! That’s what I would say if this was 1993.

What is going on this year? There are little to no standout songs this year. Some Internal Selections are sending cheesy, dated songs and many of the national selections aren’t sending the best songs. Very strange this year.

Kaliopi’s song’s nice but no one can deny it sounds very, very dated

what is up with the lighting in the music video jfc
i like the use of macedonian but sounds way too 90’s for me to love it
a little bit worse than knez or moi svjet, but leaps and bounds better than ljubav je and highway–hopefully this can be the one balkan song that qualifies to the final

Oh no no no!!! I am so disapointed! What’s wrong wilth all balkan countries this year. Only Bosnia seems to try something. Cerno i belo was fantastic but this one is so boring, i can’t even listen the full song. I hope Serbia, Greece and the new albanian song will save Balcans and represent them once again in the Grand final.

Barcelona will definitely win the Champions this year, no doubts 😉

By a longshot better than Bosnia, Slovenia and Montenegro combined. First good song from ex-Yu.

Eurovision gained many pseudo-experts after 2012. I watched this contest since 2002. Also invasion of immigrants last year could destabilize mentally a lot of people. Especially those who want to be experts, but they are not consistent. You are weak because you always had a comfortable life. You never had to try. Now you pay for the total lack of pressure on you.

She won’t win ESC 2016, but at least her song can be used as a theme of a mexican telenovela.

She is a great artist, but Dona doesn’t convince me at all, althought Crno i Belo was one of my favs in 2012. I hope Macedonia will reach the final because she deserves it and I’m sure she will have an amazing live.

Justs, Juri Pootsman, Donny Montell – they all are pretty but very weak with their songs overall.

I premised myself before listening to this song ,to not compere it to Crno I Belo. the comparison is wrong from the start. I think this song is really beautiful, and we all familer with kaliopi live performance which would make this song twice better.

Germany won a lot of things in sport in recent years, despite very often they were not favorites. Now they have chance also in ESC. They were bad since 2013 to 2015 but their entry from 2012 also would be great favorite now.

Germany is great, powerful western country with strong entry and that’s why they are greatest favorites at this moment.

Dated, bit bland, a bit boring… yet somehow is so fantastic that it is my #1!! This is fantabulous!! 🙂

The only non-english song in semi 2. I like it.

I can’t believe in eastern countries after “works” from Armenia, Georgia, Ukraine, Bosnia & Herzegovina and Romania. Also Greece, Serbia and Azerbaijan will be weak. Don’t delude yourself.

Geez, just give Russia already the victory. What a boring year!

She deserves credit for singing in her own language throughout. However this is like a throwback to Eurovision of the ’90s. I much preferred her rock sound. Also I wouldn’t call repeating the same word six times twice in the chorus the height in originality. Choosing your own language and then repeating one or two buzzwords over and over to make some sort of connection with a foreign-speaking audience is also too much Eurovision of yesteryear. My top-29 so far: #1 Ukraine #2 Austria #3 Hungary #4 France #5 Estonia #6 Switzerland #7 Slovenia #8 Latvia #9 Iceland #10 Russia… Read more »