Hardcore Eurovision fans may remember Judah Gavra as one of the favourites to win KDAM 2013, Israel’s national selection for Eurovision. The stunning Moran Mazor may have won the day (and ended up crying after her semi-final), but Judah remained our bae and we’ve been following his movements closely ever since.

On Tuesday, August 16, the Israeli heartthrob will release the official music video for his latest single “Falling” at the popular New York City bar Therapy.

Ahead of the grand unveiling, Judah caught up with wiwiblogger Mario to talk about his affection for Avatar, Israel’s recent success at Eurovision, his view on America at Eurovision and, of course, his new single “Falling”.

Scroll down to read it all…and to check out some SIZZLING new pics of the gym-honed star.

Hi, Judah! What do you think of Israel’s success at Eurovision in recent years?
It makes me happy. That’s where Israel should be, but I think it’s about time that Israel win the competition again and bring Eurovision back to Israel.

Do you still want to represent your country at Eurovision?
Of course. That’s a big honor to have the chance to represent my country. I love Eurovision and I love my country —  the best combination!

What about the United States: Do you believe they could compete one day?
Mmmm… I don’t think so, but if Australia joined in, who knows?!

Your KDAM song “We’re beautiful” included lyrics in both Hebrew and English. Do you think it would have won if it had been performed entirely in Hebrew or English?
Performing your song in full English definitely helps in the Eurovision, but I don’t think it would’ve changed the results of “We’re Beautiful” in the Kdam. Winning the Kdam and winning the Eurovision are two different things. What wins the Kdam doesn’t necessarily win Eurovision. Also, back in 2013 the rules in Israel didn’t allow to perform fully in English, at least 50% of the song had to be in Hebrew.

You’ve been a New York City resident since 2007. Are you trying to make it big in the US?
Of course. As you can imagine the competition here is a bit bigger, but yes, definitely YES!!! My single “Falling” was released two months ago, and on August 16th we’re releasing its brand new music video.

The music video for your latest single “Stay” featured a couple painted in blue running away from their slave (in this case you). What’s the story behind that?
To be honest, we just wanted to find a reason to be naked [Laughs]. Seriously now, the song talks about the moment in the relationship when you know it’s not really working, but you still have a hard time to let it go. There’s always this conflict when you’re in love, but know it’s best to leave.

In the music video I’m trying to protect these two innocent creatures from falling in love, because I don’t want them to get hurt. But at the end of the day, love wins and they’re running away. In a way these two creatures represent what’s happening inside my head.

You have to experience life on your own, get hurt and grow from it. Chris Dawson, the director (Cannes Festival), did an amazing job with the concept and execution of the music video. I couldn’t be happier with the result.

That, or you wanted to share your secret Avatar fetish with all of us?
Haha… yes… that too. I hope it worked! Love Avatar, by the way, my favorite movie! Hovi Star, your Israeli colleague, is one of the nominees for the LGBT equality award as part of our annual Vision Music Awards. How important is it for a singer to support the LGBT community nowadays? Do you think it helps to garner more votes at Eurovision?
First of all, congrats to Hovi on the success in the last Eurovision. He did an amazing job! I think it’s very important, and I also think that nowadays people understand that the LGBT community is not going anywhere and is here to stay! So just embrace, love, accept and celebrate! Life is too short to hate!

Let’s skip to your new stuff – a music video for your new single “Falling” will premiere on August 16 at Therapy in New York City! And you’ve been posting tantalizing teasers. What can we expect?
Of course, this single, unlike the other songs, is a ballad. This time it’s going to be just me in the video in black and white. There’s some projection involved in it too that creates interesting shapes. This video is very intimate. The director, Frank Boccia, is an expert when it comes to playing with shapes, shades and angles. Can’t wait for you all to see it.

The lyrics are quite cataclysmic, dare I say. How personal are they to you?
Very personal. Every word in “Falling” describes a personal experience. “Falling” is about the illusion and reality in relationships and I think a lot of people can relate to it.

Did anything unusual, funny or scary happen to you and your team while filming it?
Haha… yes. In the music video you’ll see lots of smoke, including smoke that comes out of my mouth. I never smoked before and had a really hard time keeping my face relaxed and stopping myself from coughing and choking repeatedly.

And final question: do you have a message for our readers?
First of all, to wiwibloggs — I love you guys, you are awesome. To the readers — you’re all invited to “Falling” music video premiere tonight at 7:30pm at Therapy Bar in New York City, so feel free to come if you’re around! Thanks for all the support and of course for keeping Eurovision alive and making it bigger every year. I hope to see you guys soon on the Eurovision stage, but until then… follow me on Instagram (@judah.gavra) and Facebook (judahgavramusic) and of course look for “Falling” on Apple Music, Google Play… Love you!!! 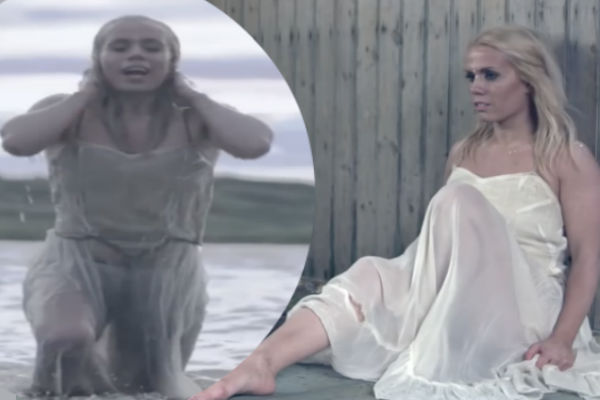 … and I am supposed to be bothered with whatever you have to say because?? #aintnobodygottimeforyourbshoney

… and one can only wonder… Haven’t you got bored of tackling the same issues over and over again?

,,, and one can only wonder if this guy has shown his naked torso back in 2013 … would he have won and anticipate Mazor’s tears right at the Kdam night? Because who cares about music when a naked torso speaks volumes …right! Right? lol