She represented Malta at Eurovision 2016 with “Walk on Water”, bringing soul and inspiring rhythms to the Stockholm stage.

And on Saturday, Ira Losco returned to the Malta Eurovision Song Contest, just over a year after her memorable victory.

And boy, did gurl come back with a bang, performing her new single “We Are the Soldiers” for the first time.

WE ARE THE SOLDIERS is the third single off my upcoming album. I'm dead excited about all of my singles dropping this year and next. As always they will be accompanied by music videos. I just can't wait to share my music with you. You can catch #wearethesoldiers on the airwaves NOW! #iralosco #newsingle #newalbum #maltaphilarmonicorchestra #YellowDiscoverLocal #Magnum #Nescafé #BMW

As the title suggests, “We Are the Soldiers” is all about fighting. Don’t worry, Ira hasn’t turned to violence — the fight is metaphorical.

As she urges us not to give up on our dreams, the two-time Eurovision singer serves a powerful dose of strength. She wants us to spread our wings and find our way, singing — “all you fighters, when your dreams catch fires, don’t you ever give it up, never give it up”. It already feels like an anthem.

A suspenseful opening gives way to mystical bells. Faster than you think, it bursts into a powerful and energetic chorus claiming that “we are the soldiers and we will find our way”. If Ira’s my commander, I already taste victory.

Again, the “7th Wonder” star mesmerises with her vocals. But now, she’s fierce, hungry and powerful. With such meaningful lyrics, she’ll definitely make you keep up the fight and pursue your dreams.

Ira Losco We Are The Soldiers (MESC 2017 Performance)

After “Walk on Water” and “Haunted by Love”, “We Are the Soldiers” is the third single off the Maltese diva’s upcoming album. Even if there’s no release date yet, we can’t wait to hear it!

We weren’t joking when we said Ira came back with a bang. Wearing black and gold, she looked stunning as she owned the stage with a stellar triple-song set.

Starting with “Chameleon” – the track she was initially chosen to sing at Eurovision 2016 – before bursting into “Walk on Water”. Every note oozed soul.

After filling the stage with nostalgia, she turned the power right up with “We Are the Soldiers”. Watch the performance below.

Throughout her performance, her natural glow radiated happiness. And why wouldn’t she? This was her first live show since giving birth to baby Harry.

Ira also had the honour of presenting the second place trophy to Janice Mangion.

But it’s Claudia Faniello who will be Ira’s Eurovision successor. She’ll represent the Mediterranean island with “Breathlessly” next May.

What do you think of “We Are The Soldiers”? Would you like to see Ira Losco return to Eurovision a third time? Let us know in the comments or record a reaction using our new app. 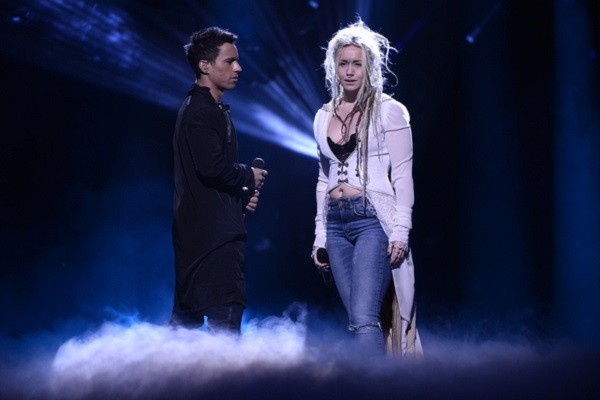 First of all I want to say excellent blog! I had a quick question in which I’d like to ask if you do not mind. I was curious to find out how you center yourself and clear your mind before writing. I’ve had a tough time clearing my mind in getting my ideas out there. I do take pleasure in writing but it just seems like the first 10 to 15 minutes tend to be lost just trying to figure out how to begin. Any recommendations or tips? Many thanks!

Dear Ira, how about finally releasing the Chameleon revamp I have been waiting for a year to be released already?

Somehow, that song managed to get stuck in my head despite all its shortcomings and let-downs. I really wanted her to revamp this one to make it better. An improved version of her own song would have had more potential than buying some Swedish reject that doesn’t suit you in the slightest, I believe. But oh well, water under the bridge…

Why does she need the Michal Szpak jacket on black, and that rock attitude, when people want to see a pop diva ???
Is this what happens after you have a son ???

lets hope her new Song’s cover will not publish in USA. i think the native american groups may have something to SAY…..XD

@ArtsvikFTW Gosh indeed! In case you haven’t noticed, Saturday’s are rather busy lately. We didn’t want Ira’s new single to get lost in a sea of national final results, so we’re publishing now. Would you rather we ignore her completely?

Are u serious u are publishing it now? It was on Saturday! Its been almost a week! Gosh