He’s doing it for his lover at Eurovision 2017. And today Spain’s Manel Navarro did it for all y’all who love surf, sand and sun with a colourful, carefree performance set before an LED beach.

Manel stands centre stage in a tropical shirt, flanked by two guitarists who channel Ibiza and Hawaii with their own floral tops. Each of them unbuttons their shirt, tantalising with a flash of taut-and-tanned chest. During one run-through Manel actually pulled a Janet Jackson and revealed a bit of nipple — not that anyone minded.

The LED includes a series of playful and brightly coloured images, including oversized surfboards that appear and disappear in succession, a sandy beach vista with sun chairs, and the outline of palm trees and a golden sun. At one point we see a camper van — probably a VW — hopping. When Manel sings, the passengers can’t help but bounce along.

The colours add a tonality to the show that we haven’t yet seen. It’s tropical, hot and memorable — and fits the song perfectly.

Manel Navarro — “Do It For Your Lover”: Reviews and Reactions

Read all of our Spain Eurovision news here 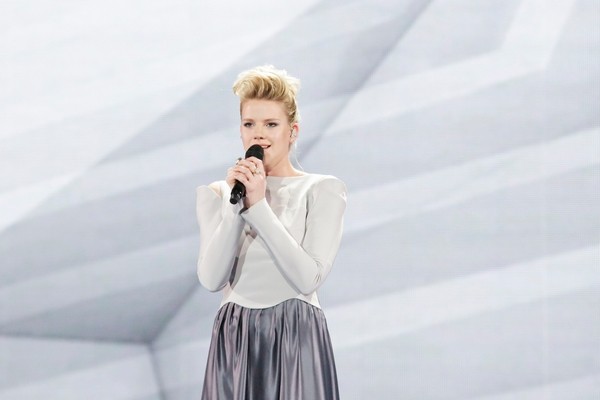 Eurovision can be anything and this is why we watch it.

The good news: They got the staging right and presented the song in the best way that it could be presented.
The bad news: It is still “Do it for your lover”. It is still coming last place because a three-year-old could have written it.

There’s something oddly charming about this but I can’t see it appealing to a big audience. Could very well finish in last place, sadly.

Iberian realness is Portugal this year.

Too much going on! Seriously, I thought I was in a movie or sth! I didn’t quite like it! It doesn’t bring the Iberian realness, it’s more of a busy stuff in the background!

After watching all Big 5, I must say the two performances I have liked the most are Italy and Spain. Great staging! They add freshness to the event.. and we will need it among so many ballads!

Not loving the stage design, but definitely not last!!

Definitely not last! this could be an icebreaker at the grand finals.

I agree with these press results. 🙂

I was expecting UK to be first today. But both were far ahead.

26th. It will take a miracle to save him now. oh oh

Manel has brought his band with him and they look like a boyband! They’re all wearing tropical house shirts, literally Topman’s SS17 collection. The boys look great together but they look so much like a band it’s hard to distinguish Manel as a solo artist. The background is colourful and tropical, it’s orange/purple, the whole thing is pretty cool and Manel looks great on camera; he has such a nice charm about him. He’s also wearing his shirt buttoned down so low that at one point there was a nip slip, keep an eye out for that one lads!

Well, still better than Mirela in my opinion. The only ones I would’ve liked more from the Spanish final are LeKlein or Maika.

If you play the “Contigo” vinyl backwards, you’ll hear the name of this year’s winner.

Every time you sing “Contigo” in front of a ventilator, Manel will score 10 points less.

Unfortunately it’s not mathematically possible for anyone to get “minus” points. 😉 Haha.

Every time you sing “Contigo” in front of a ventilator, the room will smell like sh-t.

Guys, bring up the hate!

Don’t hate the song but it the staging and the performance seemed a little too relaxed! Like it said, it’s more meant for a house band during a Cinco de Mayo celebration at Margaritaville!

(Don’t mind me, I’m having tacos with my husband at a local Mexican restaurant as I’m replying to this!)

I didn’t think that anything could make this song less interesting, but I was wrong. The backdrops look cheap, Manel sounds uninspired, it’s just urgh. Still my #42.

This is sooooooooo…. Zzzzzzzzzz

So they are all playing guitars (or drums), singing and surfing for their lovers. So… what? This is the definition of 3 minutes of the “so what” factor, and the problem is the song itself.
The staging is quite good though; I like the domino surf board effect, and the other guitarists are cute. 🙂

Of the B5 and Host:
1. Italy (however, I don’t see it as a winning moment)
2. Ukraine (I miss their Nat. Final staging)
3. Germany (still hate the song but it’s better than Spain)
4. Spain (it’s Eurovision, not Jimmy Buffett’s Margaritaville)

This performance is so Australian lol

If you repeat “Mirela” three times in front of a mirror, the grandma from Statements will appear

that made my day