Two years ago she put her career on hold to cope with her debilitating stage fright and to achieve her dream of becoming a mother.

And on Friday Spain’s Pastora Soler proved that she used her time off wisely, releasing her new single “La Tormenta” (The Storm).

Having weathered her own personal maelstrom, she returns with a powerful pop ballad about reconciliation and hope in matters of the heart.

“My tears want to tell you that I love you, my dear,” she says. “We can still cross the storm…come and hug me and feel again my love for you.”

At the time the Spanish songstress confirmed that she had had an emotional morning, and was enjoying every moment since beginning this project, which marks her long-awaited return to the Spanish music scene.

“Here I am with fresh energy. Truly excited to make you feel emotions. This song — it’s pure “Pastora”.

Fans proved they still have an appetite for Miss Soler, helping the queen of the power ballad climb to #1 on iTunes Spain within hours of the song’s release.

“Thank you, endlessly!” she wrote on Twitter, announcing the news. “I savour and appreciate this number 1 as much as ever! Heartfelt thanks!”

Artists including Soraya (ESC 2009) and Sergio Dalma (ESC 1991) wished her all the best as she enters the next phase of her career.

“Dear friend! I wish you a new chapter of your musical career full of happiness! You deserve it so much!”

Pastora teamed up with an old friend for the new single.

“La Tormenta” was actually composed by Tony Sánchez-Ohlsson — the composer behind her Eurovision 2012 song “Quedate Conmigo”.

Pastora plans to release her new album this September.

You can check out her full tour schedule to see if she’s headed to a town near you.

Pastora has teased her return with a series of high-profile performances in recent weeks.

She recently joined Alejandro Sanz for a 20th-anniversary concert celebrating his album Mas. And she slayed her Eurovision 2012 song “Quedate Conmigo” at Madrid’s Worldpride.

What do you think about “La Tormenta”? Do you want to join her in crossing the storm or are you staying at home? And would you like to see Pastora at Eurovision again? Share your thoughts in the comments section below! 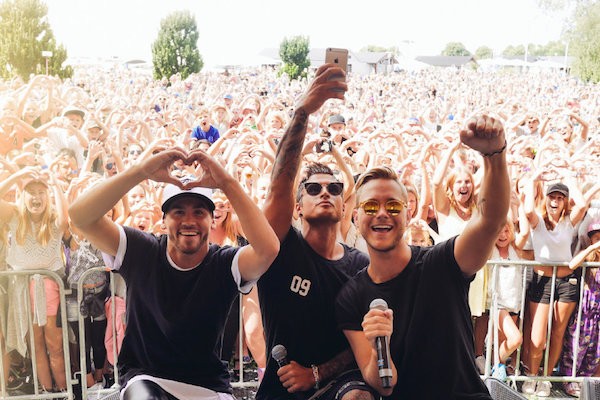 Ooh! Aah! Samir & Viktor shut down the haters in new single “We Do It Anyway”

Great song. Amazing lyrics and her voice sounds as powerful and beautiful as always. The best Spanish singer nowadays and the best Spanish Eurovision entry ever. Quédate Conmigo is an immortal hymn.

Quedate conmigo must be the most overrated Spanish ESC-entry ever. So cliched ,banal, generic and dated. The kind of music you only hear in ESC, at least mostly. Only her voice is nice. Very bad song. The kind of song that most people just yawns at, because it sounds so typical

Pastora’s amazing performance in baku remains as the most robbed act ever! I can’t get over the fact that she placed so low in the televoting… that year also happened the most overrated act ever: the russian grandmas

Quédate conmigo is one my favorite Eurovision songs of all time. I so wanted her music o win. Pastora is so good. Very talented and passionate about her music. Ok yes, she always sings about love. But that’s her genre. I love her.

The only wonderful performance I have ever seen belongs to Pastora Soler in Baku 2012. Before and after that I do not remember much.

Thank you Branko! Solved!
Thanks!

Sounds amazing and everyone’s crazy about it. She was TT and nr1, so very high expectations for her come-back. Thank you Ms Soler.

It’s generic, boring and bad manufacture. Plus bad lyrics.
It just smells flop.
It hasn’t even made our Top 200 Spotify which means it’s not going to debut in our Official Top 100