Since winning Eurovision 2017 back in May, Salvador Sobral has been busy touring Portugal, releasing new music and raising funds for disaster relief efforts.

And on Tuesday doctors told Portugal’s beloved jazz star that he needs to slow down, forcing him to cancel three concerts this week — despite his sincere wish to perform for fans.

“By way of medical advice, Salvador Sobral will not be able to fulfil the professional commitments scheduled for the next few days,” a statement says on his official Facebook page. “The musician will have to stop his activity for a few days to control his health condition. Thus, we inform you that the scheduled concerts for Festival F in Faro (Excuse Me,  31/08 and Alexander Search, 01/09) and Anadia (02/09) will be canceled. The new date for the show will be announced soon.”

Despite the unfortunate cancellation, this is not the end of Salvador’s “Excuse Me” tour.

If everything goes as planned, he’ll return to the stage on September 8 (that’s next Friday) in Cascais, where he’ll play the Festival Internacional de Cultura. In total, he’s got five more gigs this month. Yessss!

As for Salvador’s band Alexander Search, they’ve also released a statement. They plan to hit the stage again on September 17 in Castelo Branco.

The longer the wait, the sweeter the sound.

Fans responded to Salvador’s statement with an outpouring of support and have wished him a quick recovery. In just a few hours, his post has received more than 500 comments, and almost 2,500 reactions. His growing legion of fans understand his situation and respect his decision.

Among all the comments, one really stands out. One fan used Salvador’s song titles to create a message wishing him well. It’s an appropriately creative response for the bohemian star. It reads:

“Excuse me” Salvador — I realized that “Something Real” happened. I told you that there was “Nothing to Look Forward To” for a vacation, but you said that you felt like you were in a “Beach Prision” … Now you have to say “I Might Just Stay Away” for a few days, but “After You’ve Gone “, “Neither I” nor anyone else has the same “Glow”! “Oh Love” rest a lot, to be “Ready For Love Again”…I want to go through “Autumn in New York”! I only ask you one thing: Do not “Change” anything, you’re beautiful like that! “I’m going to love you both!” Kisses and see you soon!?

At this point, we simply wish Salvador a speedy and easy recovery and we can’t wait to see him on stage again as soon as possible. Amar pelos Salvador.

Were you going to any of this week’s concerts? Do you want to send Salvador a message? Feel free to do so in our comments section! 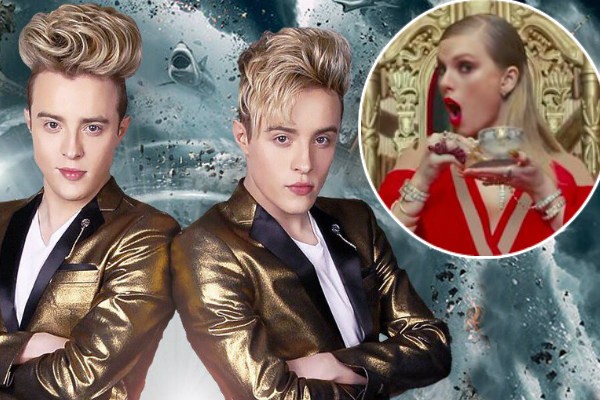 Look what you made us do: Taylor Swift’s fans get Jedward suspended on Twitter

I hope he’s ok. Touring, even inside a smallish country like Portugal, is an exhausting thing and he must be careful. Sending positive energies to him and his family.

Do you find yourself too convincing “does he need a heart transplant, his only health issues are his hernias”? Unfortunately rumors of his heart problems are true, he has indirectly confirmed that he has heart problems.
He also doesn’t like to talk about his health problems.

I would even say that he and his sister have directly confirmed that he has a heart condition in several interviews and in one of his statements about an unauthorized biography. Are you happier now?

He also had hernias, but it’s not his only health issue. For the looks of it, the cancelled concerts and the whole absence during the ESC rehearsals are related with heart failure and he might very well be on the last stages of it. He might need a new heart or not, it depends on the how his condition affected the entire heart muscle and cavities…

so..where are the bastards who said that Portugal created gossips about his heart conditions just to win Eurovision? Shame on you jealous people!
Best wishes Salvador

THEY MAY HAVE changed their name to Kai !!

please go eat some Oscypek and give me a break…

I think Polska is more alike!

No so much created as milked Kai, but I’ve have done the same thing. It’s the sort of thing which has an impact in televoting shows these days, as we saw.

You and no one has really grounds to say that his condition affected televote. Has Monika from Poland won in 2015 with a much more evident condition or Corina May? Stop making excuses for Salvador’s victory other than it was a song and a performance that pleases people. Full stop!

Do you know FSC? I have discovered a few months and a competition similar to Eurovision, each one chooses a country, if the country is already busy, do not worry, you continue as a jury of that country (and do the same), send a song and vote at the end of Editing (does not take much time). It’s very funny and discovers songs from other countries. Subscribe to the forum ESCYOUnited.
Link = http://escunited.com/forum/threads/3472-Join-FSC-Sign-Up-Thread/page220
If you have any questions, you can ask me, I wait for you.

Good luck and speedy recovery…he is a REAL singer with personality nd distinction. All respect

Yes….the other singers were illusions constructed by our minds.

he is the fakest diva full of arrogance, everyone else behaved better and were more real than him

So and that is why you wish him a heart condition… How low can one go?

That is just mean, you know? If someone you love was in the same situation than Salvador, would you like to read what you wrote? I know I wouldn’t.

Hope his health improves fast!! How’s the situation with his transplant?

The situation of ‘Amar Pelos Dois’ is even worse though!!
It has dropped out of spotify charts even from Portugal too!!
Only Belgium is still charting outside its territory and Norway Italy and Belgium are still in their own country’s Spotify Top 200.

In iTunes “Amar pelos dois” still in the charts of Cape Verde, Belgium and Portugal http://kworb.net/itunes/artist/salvadorsobral.html and he achieve two golden records (one for the single and other for “Excuse me” although APD is not in the album). In any case this is not important now, the important is he get well soon

iTunes is not a representative chart!! If 1 person would download a song it enters into the iTunes chart of that country!! It’s only used by the entitled / uninformed

So what?… Salvador is not after charts positions, like other so-called “artists”.
Anyway, Spotify is not representative at all, much less than Itunes.

How is Spotify unrepresentative?? Is that correct word!!

Because it is not much used, except the Nordic countries like Sweden. So it does not represent the likings of the majority.

Well total stream would be unrepresentative!! But since they bring out charts for individual countries the fact that Nordics use spotify more doesn’t make a country’s chart disproportionate.

It is not representative.
In Portugal, streaming apps like Spotify are mainly used by teenagers and youngsters in their early 20s. (Same happens in other Southern European countries.) If you compare Spotify charts with the official sailings and the artists that give more concerts, you’ll see that the names do not coincide. Comparing Spotify charts in Sweden with Spotify charts in Portugal is like comparing apples and oranges.

Well he( he call it a circus) and clearly you too don’t care about Eurovision too!! A bad and forgettable winning song is not good for contest

A bAD aNd fOrgEtTAblE wINnInG sOnG iS nOt goOd fOr cONtESt

I forgot the song with poland won eurovision…. Or wait…

Poland will win soon!! Do not worry

A forgettable song that got 12 from the jury and 10 from the televote of your country. I guess dealing with that means that you wish Salvador a serious heart condition. What goes around comes around. So be careful with what you wish for…

“Amar pelos dois” is still in the Spotify Chart in Portugal: https://spotifycharts.com/regional/pt/daily/latest
Still, I think Spotify is not very used by adults (at least in Portugal). Salvador Sobral’s average public is over 30, I’d say. Also, in Portugal it’s not the CD sales, ITunes etc. that make an artist’s career. They all make very little money with sales; it’s all about the concerts… that’s what artist do for a living.
His concerts are always sold out and people who attend the shows are surrendered. He truly is a wonderful on live shows.

I keep track of this on Spotify and it had dropped out yesterday and re-entered today .

God… What an obsession, for someone who hates the song…

Well three things
1) I think I’ve already told you this….I don’t hate the song. Its not good enough to deserve my hatred.
2) yes ESC is my obsession
3) I don’t go around looking for charts ….esctracker.com provides all at one place and so it’s easy to track all ESC songs…. including ones I don’t listen to at all

So you a good song deserves your hatred… I guess than you love bad songs. That explains your love for the yodel thingi. But that lets me wondering about Blanche. Why would you love her or do rather do you hate her?

I wish him the best of luck. I hope he gets well. :/ I loved his song and performance, plus voted for him three times in the grand final.

That post with all the song names is one of the worst things I’ve ever seen. Really, really terrible

It’s not terrible, it’s just a love demostration made for a fan in Facebook

Your life must be really boring and pathetic if that’s one of the worst things you’ve ever seen. I pity people like you tbh.