Hallo! Germany’s time to determine who will represent the country at the Eurovision 2018 has finally arrived! Unser Lied für Lissabon is happening tonight at 20:15 CET live from the Studio Berlin Adlershof in Berlin!

The nation’s race to Lisbon started back in October when broadcaster NDR revealed its plans for the 2018 national final. Keeping their national selection concept, they not only updated it into a much bigger show but also with a wider input. That’s how NDR is ready to show that they are capable of climbing the scoreboard at Eurovision. It’s been a five-year streak of disappointing results, and it’s now time to break it and turn things higher.

From all acts that took part in the process, only six selected will be fighting tonight to win the Lisbon ticket. Our nerves and excitement are already palpable!

But who should be the one change Germany’s fate at the Contest? We wanted to know your international view, so for the last couple of days, we’ve been asking y’all to vote in our poll. And after counting a total of 4,736 votes, we can now reveal that Natia Todua is the clear favourite among our global audience to win tonight’s Unser Lied für Lissabon.

With a respectable amount of 2,001 votes, Natia Todua goes as our reader’s favourite.Natia’s win is practically a landslide, with, 42.25% of the total cast.  The Georgian-born singer — also the most recent winner of The Voice of Germany — provides a very edgy and upbeat offering that seems to appeal to our readers. With a very stylish look and a raspy, distinguishable tone, Natia is making her own way. Will she make her way also to Lisbon?

In second place – and quite a distance from Natia – is Michael Schulte and “You Let Me Walk Alone”. Another

Rounding out the top three are voXXclub and their crazy fun “I mog Di so”. The only truly upbeat song, complete with folk party vibes – and Bavarian yodelling included – clearly is not to be dismissed. The five-piece band’s different offering managed 631 votes in our poll, just 163 votes away from Michael. Tonight they want to make some noise and show y’all that they’re more than ready for Eurovision. After 10 years singing in English consecutively, is this the year to break the streak?

Poll results: which Unser Lied für Lissabon act are you most excited about?

Tonight’s Unser Lied für Lissabon is on from 20:15 CET. The show will be held at the Studio Berlin Adlershof in Berlin and hosted by Linda Zervakis and Elton. The winner will be selected by a combination of public voting, a one-hundred-member Eurovision panel and an international expert jury panel.

This international jury has 19 jurors from all over Europe and includes familiar faces like Margaret Berger (ESC 2013), Ruth Lorenzo (ESC 2014) or Tinkara Kovac (ESC 2014). Slay queens!

If you don’t want to miss the party you’ll be able to follow the show live here!

Who should represent Germany in Lisbon? Is Natia Todua your favourite or is it Michael’s opportunity to shine in Lisbon? And, can any of these acts provide a change in fortunes for Germany in the Contest? Tell us in the comment section below! 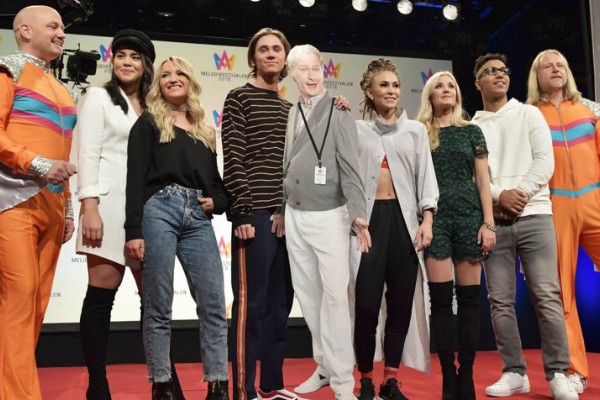 Melodifestivalen 2018: Who should win Semi-Final 4 in Örnsköldsvik? Poll: Which automatic qualifier had the best first rehearsal on May 13?

Once again a wiwi fan poll completely out of touch with what people actually want. Either it’s dodgy or people here have zero taste.

Or it’s possible there are people out there who are actively sabotaging Wiwibloggs for some kind of personal or commercial gain. The challenge is proving it.

Something went terribly wrong in this poll…

She ended up last.

I wanted Ryk to win, but Michael is perfekt too

Seriously… Hahaha
I knew it. Sixth German NF I told who would win… Sadly I was right.
I bet for our bottom place again

Quite. Absolutely no-one is going to hear this, think “oh wow” and pick up the phone to vote for it. As a committed Teutophile it really does pain me to ask… why is Germany so determinedly useless at coming up with a genuinely competitive Eurovision song?

(Apart from ‘Glorious’ which was of course fantastic. Or, rather, it would have been if Madame hadn’t got sloshed on free vino in the Green Room beforehand and ended up getting the vocal timing completely wrong.)

Michael won. Decisively in the end.

I don’t understand this result…

Germany might as well give up on Eurovision. They haven’t produced a good song for Eurovision since 2012 and always consistently finish in the bottom 3 since 2015 and I think that none of the songs in this selection will get above 20th.

Ok, I mog di so for eurovision now, Germany

That’s the fun AND smart choice

Yeah, no. Sorry. Guaranteed for the bottom 3 again if they send it.

Definitely not mine. The girl has a wonderful voice but the song is just awful.

Natia absolutely guaranteed last place if our German comrades are foolish enough to vote for it. Yet more woefully drab, lifeless tat. VoXXclub or nothing, please. I mean I’ve heard better Schlager (to say the very least) but at least Austria and Switzerland might chuck them a few votes.

No, please no. I don’t want to see her representing Germany. There are much better artists

Oh what a gap… Seems natia is a clear favourite…?
So sad my favourite from France was by far Michael Schulte’s song… (Well nothing is definitive yet… I Hope Germany will choose him??)

She’s not a favourite, no one likes the song here in Germany. The favourites are Michael and Ryk, Natias votes are probably from her fellow Georgians ^^

What? Yesterday when I checked, she was 5th place, maybe?

Wiwibloggs, don’t show us the wrong picture here. We need to see the poll results over time

Natia hopefully will never win the preselection. This would only become a bottom 5 finish at Eurovision with My Own Way aka Perfect Life but with a soul voice. Don’t get me wrong: I love HER as an artist and her unique voice and also love her song BUT the chorus is as forgettable as Perfect Life.
My hopes are at Michael Schulte.!

Georgia, I respect your Country but this is our selection and Natias song is the worst out of all six. We won’t send her, Georgians no Chance. You can have her if you want her that badly…

By hyjacking polls, they do nothing but damage to the artists chances, very sad to see. I would never ever vote for an act that so obviously has dubious levels of support. Nice the see Michael actually won the poll, hope he wins tonight

I love Natia but we have to send Michael.
Its our only chance to get a good position! 🙁