She was the first act confirmed for Eurovision 2018. Now, Sennek — AKA Laura Groeseneken — is almost ready to debut her Eurovision entry for Belgium.

We still have a little bit of a wait though. This year’s Belgian broadcaster, VRT, announced earlier today that the song will be released on Tuesday, March 6.

The song is set to be premiered on Belgian radio in the morning of the 6th. Songfestival.be speculate that means a reveal is most likely on the show De Grote Peter van de Veire Ochtendshow. Peter van de Veire has been the Flemish commentator since 2014, giving an obvious Eurovision connection.

Belgian’s attempts to keep their song a secret haven’t always worked before, though. Last year, Blanche’s “City Lights” leaked early — to a great reception. We’ll see if they’ve learned their lesson for this year!

Sennek has previously given a few hints about what the song may be like. It’s a self-penned track, that’s a “mysterious pop song”.

It also wasn’t specifically for Eurovision, but rather as something more meaningful to Sennek herself. That definitely sound the right way to go for us, y’all!

There’s definitely quite a bit of expectation for the song, no matter what it’s like. Belgium’s current run of form has seen them hit the top 10 for three years running, and the top 4 twice in that period. Can Sennek go even further?

Are you looking forward to hearing Sennek’s track? Do you think that Belgium can carry on their current run of form? Let us know all your thoughts in the comments section below. 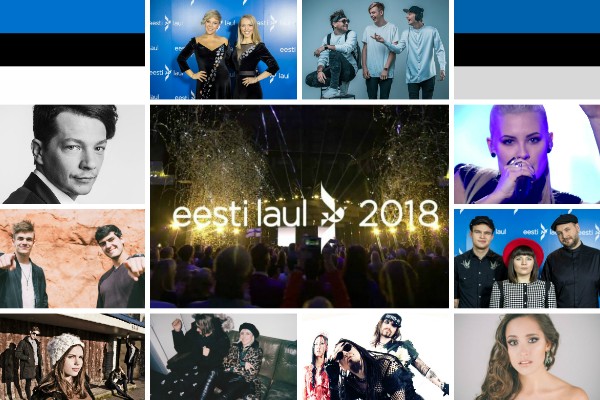 Estonia: Who should win the final of Eesti Laul 2018?

The song is leaked. It’s on youtube since yesterday evening and I heard it on the radio today.

It happened again, the song has leaked!

Let’s see if she will continue good trend, I’m excited for this one 🙂

She uses as last # the word “caviar”
Have a slight hunch this will be the title of the song…since nothing in the picture refers to caviar….exciting! 😉

Caviar? What a weird song title. I don’t think it fits the images of the videoclip we have seen so far.
I can’t see the link bedween mirror reflections and caviar lol.
I do hope the song has a different name…

Caviar is also the name of a Belgian production company for advertising, clip etc…
https://caviar.tv

Yes, they’re probably just the producers of her music video, hence the hashtag

I have such high expectations.
They really smashed it last year and City Lights is my most loved song ever in Eurovision history.. I just love this song.
Excited and waiting for Belgium to bring the winner song 2018 🙂

Looking very closely at Belgium and The Netherlands. Following the last couple of years, they’re actually the two countries I am excited about this most.

So this can go two totally different ways: either surprisingly good or a total let down. I was surprised by the choice to send her because maybe 1 in 1000 flemish people knew she even existed. But it could also be her breakthrough and maybe we win the whole thing. As a wise dutch singer once sung: “most dreams are lies” –MB

Belgium is always overlooked. Last year no one cared about Blanche until her song came out. I’m sure they’ll deliver something great once again.

I must be the only one on here, but to me she comes across as boring. Ive watched some performances of her, but she lacks something, that spark we need to see in a eurovisionwinner. I expect a good song, i do, but SHE, herself, doesnt give me any winner vibes at all for now.

I spent all of the period prior to the release of City Lights saying that Blanche would probably do something boring and that she’d be doomed, and look what happened there. Also, judging by who won last year, people seem to vote for boring.

For all I know, she could in fact have a song worse than Celebrate (2004) or have a song better than Euphoria. It’s very difficult to judge before they’ve released the song.

Dude, do you even know the difference between boring and being sensitive? Salvador’s performance was inmensively sweet, heartfelt and vulnerable

You may not like it but there was magic when he was singing.

Well that song was boring and no one can deny it. The magic was in the way the performer sang it .

Hopefully the internal selections will save Eurovision 2018. I’m incredibly hyped for Croatia, Cyprus & Bulgaria, and also excited for Azerbaijan, Austria, the Netherlands & Belgium.

Sneakpeak of the music video (no sound) on her Instagram story :
https://www.youtube.com/watch?v=nYuJExXmN9g

It actually looks pretty sexy and mysterious. Thanks for the link!

Can’t wait, I have a feeling her entry might even get Belgium in the top 3.

I always felt a good vibe coming from her. Also Belgium’s recent efforts make me feel that this could finally be the winning year for them. A mysterious pop song that wasn’t written specifically for Eurovision also sounds like a great start. But hey, let me try to control my expectations.

I just hope Sennek learned a few things from the Wallonian eurovision team… I liked all last three Walloon entries a lot, but I liked none of the Flemish ones (yes, not even Laura Tesoro). (I’m Flemish myself.) Sennek seems like a really sweet and kind person though. I’m just not so sure if we will be able to repeat the great results of the last years… 3 years of top 10 was already fantastic, I will be happy enough if we get to the final lol.

I still dont know what to think about Belgium , they selected their artist soo early and that may closed the doors for better entries … but looking at Belgium for the last 3 years shows that they know what they are doing. I hope they bring something good again.

About this, you say they selected their artist so early, but since last year was Wallonia’s turn, Flanders actually had more than a year to chose the artist 🙂 So I don’t think they made their decision too quickly…

Yes you have a point , i allmost forgot that Belgium is like 10 countries and they all rotate when it comes to Eurovision picks and stuff ? Flanders , French , Germans …. i dont even know who to credit for the good entries and witch will eat the blame for the bad ones ?

It’s actually only the French (Wallonia) and Dutch (Flanders) speaking parts that get to choose :p The German part is too small to have their own broadcaster, I think?
Last Flemish entries: Axel Hirsoux, Laura Tesoro, now Sennek
Walloon entries: Roberto Bellarosa, Loic Nottet, Blanche

Hope that clears things up a little XD

Since you make articles about release dates of songs, the MV of “Fuego” by Eleni Foureira will be broadcasted on RIK on the 2nd of March. There is an announcement on their Facebook page since Friday.

As for Sennek, I really like her voice and the renditions of most song I’ve heard her cover and Belgium has great momentum on Eurovision rn. So i am really hyped to see what she has to offer.

I think she can be winner.

I know it’s too early to say something like this, but I have a feeling that this one will be the winner. :p

But this is going to be an English song! Not Flemish. You don’t want countries to sing in English.

Oh dear, please do not let Flanders sing in Flemish/Dutch. I feel like the only songs in Flemish that get played on the radio here are joke songs/ schlagers/kid songs… brr. (Not that I have anything against singing in your own language, for instance, the Netherlands actually do have nice songs in Dutch…)

Well if you guys would do something like this in flemish it would be awesome 😀
https://youtu.be/N0OLEgc-Glk

If you want good contemporary Flemish songs you will have to listen to Bazart, best flemish band at the moment. They are getting out of sight but their songs are pure gold and won several prizes!

I am looking forward to hear her song, ggod luck neighbours. :3

Really looking forward to it!

I love the fact that “it wasn’t specifically for Eurovision”. Sometimes, we need quality entries without aiming specifically at Eurovision. Better authentic!
Looking forward!