Their music video for Eurovision 2018 amassed more than a million views in less than a month. And to celebrate the milestone, Macedonia’s Eye Cue released an acoustic version of “Lost And Found” on Friday.

Massive thanks for the first million views and your support , since you send us so many good vibrations we’re sending you back some acoustic vibrations on “Lost and found”. We truly believe that you will enjoy this strict version of the song!

Moto of the day: Less is more

And less really is more.

The studio iteration of “Lost and Found” snakes through a number of genres, most notably reggae and EDM. However, here the mix of styles is slightly less prominent. Instead the focus is entirely on Marija’s live vocal. And what a vocal.

Acoustic performances can be notoriously hit and miss as the performer has nowhere to hide should they mess up. But the Macedonian songstress has no such problems. She’s flawless throughout.

Bandmate Bojan accompanies her on guitar and lends a hand with supporting vocals.

The end result is as mellow and flowing as the original. But the absence of electronic elements and digital flourishes allow us to appreciate the track all the more.

And it’s not just Marija’s vocals that are effortless. The woman is on point sartorially too. Donning a salmon-coloured pantsuit with a black top she exudes casual chic. In a leather jacket, t-shirt and jeans, Bojan is simply casual.

And after all the behind-the-scenes shenanigans, Macedonia revealed Eye Cue as their act for Eurovision 2018 in February. The duo’s entry “Lost and Found” followed a couple of weeks later.

The band, who usually work within the pop-rock genre, consists of Bojan Trajkovski and Marija Ivanovska. They have been performing together as Eye Cue since 2008, so have 10 years worth of experience to really bring the song and live performances alive.

In 2017, Macedonia were represented by Jana Burceska with the 80s tinged “Dance Alone”, which was a huge favourite with the fans. Unfortunately the song did not translate quite as well in the arena in Kyiv, and Jana came 15th in her semi-final.

Jana still stole the show anyway with arguably one of the cutest postcards Eurovision has ever seen, announcing her pregnancy by showing her scan. She then was proposed to by her then-boyfriend Alexander – and she of course said yes!

What do you think of “Lost And Found”? Do you like the acoustic set? And can Eye Cue finally break Macedonia’s non-qualifications streak? Let us know in the comments below. 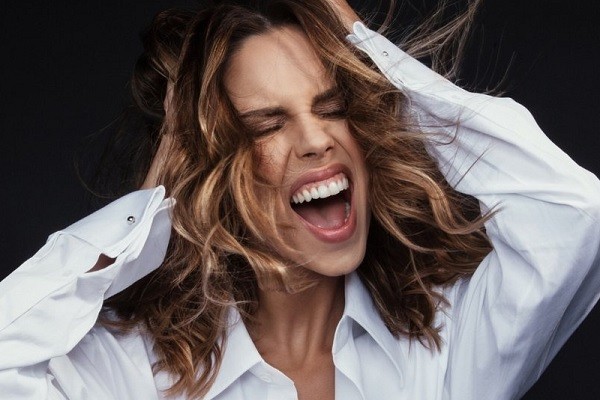 I like the acoustic version and her voice is amazing.
But I still prefer the original version. Love it. Really hope it somehow manages to get through.

This should WIN the first semi final. Not just qualify, WIN! I would kick anyone else out for them.

I’d rather give Armenia a 2nd NQ or an end to Croatia’s qualification streak if that gives Macedonia a spot in the final.

I think at this point after this live vocal , even with bad staging this song will qualify. This easely can replace Finland , or any other act exept Bulgaria , Belgium and Estonia , the three guarantee qualifiers for me. Gl Macedonia! Love the song.

I’m not blown away – it’s good, the mismatched parts blend together more fluently, but Marija’s live vocal are more suited for non-acoustic version.

I knew it, the girl can sing! Love the acoustic version <3

This doesn’t suit the song at all!!
The normal version is growing so much on me…. it has already jumped over 10 places in my ranking

Her voice <3 So ON Point. Hopefully in the final

I like this version and the original version as well. Semi final 1 has a couple of very similar style songs from very strong countries. I hope some of them will be left behind to make room for this. Go Macedonia! Good luck

That sounds good. The problem with the original song is that it’s too messy. There’s too much going on and considering that most of the voters are people who listen all of the songs for the first time I can imagine their reaction to it. I can’t even see juries supporting it at all. I think that it will be a bottom 3 result for Macedonia in the semifinal.

Don’t worry… With Iceland, Croatia and Switzerland (Like it, but it won’t go anywhere)in the same semi it won’t be bottom 3.

I’m waiting for Franka’s live performance, I wouldn’t put it at the bottom yet

I think in semi 1 it could qualify, but I believe that in semi 1 it won’t be remarkable enough and we have Belgium serving us a better Version of this Kind of song. But who cares about my opinion? Anything can happen.

Croatia isn’t going to the final. Good song, but not strong enough. Kind of Czech Republic and Iceland 2017. She won’t finish last though, because Croatia will collect points from Albania and FYR Macedonia, plus some jury points. Iceland and Switzerland are the strongest candidates to finish last.

I think that non-qualifiers will be Finland, Belarus, Albania ( 🙁 ), Armenia, Ireland, Switzerland, Iceland, Macedonia and Croatia.

@era um no. Finland, Croatia and Switzerland will qualify! And Belarus, Azerbaijan. Armenia, Austria, Iceland will not qualify!

If you really believe Croatia and Switzerland have more chances of qualifying than Austria or Azerbaijan then you’re somewhat of a fool.

Vocals on point! I really hope Macedonia can finally nail the staging, this will be crucial to them making the final.

Better than the original version but this song is still down at the bottom of my list this year. The chorus is just so flat. Obviously, I want FYROM to do well…they have been underrated far too many times but this year is not one of them.

I got lost in this beauty and I don’t want to be found… Crikey!! This is going to do so well in Lisbon. All my best wishes to Eye Cue.

Best chance they’ve had since Kaliopi’s first time around (or second, technically – she was almost Macedonia’s first-ever entrant). I’m just going to go ahead and say it: this is their best entry ever, and I hope that she can kill it live and give them a deserved spot in the top 10.
(If both Macedonia and the Czech Republic make it to the final, this’ll be the best Eurovision year ever!)

People talk about Ireland and Sweden getting equipoised on their victories, but I am all about Valentina and Kalipi on their # of participations.

Do people honestly think Sweden is going to win this year? That’d be one hell of a letdown.

(Also if they had switched out Slovakia and B&H for Macedonia and Germany, maybe squeezed in room for Denmark as well, 1996 would’ve been even better)

Please Europe let this song qualify! My biggest wish for this year’s contest is Macedonia’s qualifying!

They should do this version on some of the stops of the promo tour. Great!!

To think that they even thought not to participate for this year… thank god that they changed their minds! Yas, slay those vocals. We have many good songs and this is one of them.
Macedonia, you deserve to qualify.

This song has grown on me so much and her voice is amazing! I hope they qualify from that crazy semifinal!

Than you have to trade Albania 😉 There are only three/four places for borderline candidates available to be realistic- and these might go to Cyprus, Austria, Azerbaijan and Armenia. Two of them need to go so that Albania and Macedonia can come in. I can’t imagine Israel, Bulgaria, Belgium, Greeze, Check Republic, or Estonia not qualifying. And to be honest I think Austria and Cyprus are sure qualifiers too, because people will get these too songs immediately and they will find enough lovers. For my money I need only Israel, Albania to qualify for sure – Cyprus is my guilty… Read more »

I wouldn’t trade Albania with anything 😀 I want it to qualify more than any other song. Anyway I don’t do this kind of calculations. I just think that certain songs deserve to qualify and others not, no matter what other people think or what the fan favorites are. I would like to see in the final: Albania, Belgium, Estonia, Greece, Israel, Macedonia, Austria, Switzerland, Lithuania, Bulgaria.

We have the same thoughts about Albania. Really hope he makes it. It’s all I ask this year, now that my Esamiba is gone.

Esamiba :'( It would be in my top 3 and my winner of semi 2!Now I don’t even care about semi 2 and I only care for Albania to qualify 🙂

Also you have to count in the juries’ vote, which is kind of unpredictable. Last year I loved Finland and it got the people’s vote to qualify, but not the juries’, so it didn’t qualify. On the other side Australia didn’t get the people’s votes, but it got saved by the jury. So you never know.

Impressive! Totally encouraged that this will hold up live in Lisbon — After taking awhile to get it and warm up to it, this is totally in my top 5 now and threatening to move up every day closer to Lisbon — Completely could slip in for the win!

Macedonia is actually my 8th place… I just hope they qualify but in a strong semi like this they might undeservingly drop out. I hope this wo9n’t be the case, because I would NOT Need some countries like Finland, Azerbaijan or even Austria in the final..

Okay, Change Finland with Armenia… I like Armenia and I have it on my qualifier list, but I actually don’t want that if that makes ANY sense at all…

Wow. I’m stunned by the live vocals. Could be the best entry ever from the sun-ray country. I hope they do well at the contest. 🙂

They are going to have to be near-perfect to be better than 2012’s Crno I Belo. It’s a very high bar to clear.

I’m from America so I don’t really hear European opinions on songs but this is in my top 5 overall and I listen to it daily. All I have to go by for how well Europe likes it is the bookies and it’s nit qualifying as if right now but best of luck to eyecue and Macedonia

Dont understand what is meant by you don’t really hear European opinions on songs. You have no internet?

It’s a miracle that this three songs in one really work and it hooks you in. Just voice and guitar – carries the whole song and vibe.

Her singing is BOMB, no doubt, but that chorus is indeed very low pitched and hard to sing, and this is what makes me worry.
Hope she’ll has some backing vocalists to back her up.

There will be 3 female backing vocalists, two of them sing very high so hopefully the chorus will sound as powerful as on the studio version

Her voice is absolutely wonderful.