For the first time in 20 years, Eurovision is traveling to Israel.

Before the fun begins in earnest, we wanted to publish a guide to host City – Tel Aviv.

Our guide will be published in three parts.

Today we will take a look at some basic information about Israel and Tel Aviv.

Basic facts about Israel
Israel is a very small country – approximately 21,000 sq. kilometres – and one of the smallest countries to have ever hosted the Eurovision Song Contest.

There are only five smaller countries in this year’s competition: Slovenia, Cyprus, Montenegro, Malta and San Marino. In contrast, Israel’s population is quite big compared to its size – about nine million people, almost like Greece which is about seven times the size of Israel.

The good thing about Israel’s size is that it is quite easy to travel throughout the country and if you are planning to do some sightseeing then your travel times will be reasonable (transportation permitting).

The distance from Tel Aviv to Jerusalem is only 35 miles / 60 kilometres which is roughly an hour drive. This means day trips to Jerusalem (or other destinations) are easy and you can be back by sunset to have dinner in one of Tel Aviv’s amazing restaurants.

Israel has two formal languages – Hebrew and Arabic (which has “a special status” under Israeli law). English is widely spoken and most Israelis will be able to communicate in English at least on a basic level. Russian is also very common as there are c. 1m immigrants who have been living in Israel since the nineties and the collapse of the USSR.

Airport
Israel’s international airport is called Ben Gurion Airport (TLV on your luggage) and it is only 15 km (10 miles) from Tel Aviv. It is also quite close to Jerusalem – around 45 km (30 miles).

Israel has bilateral agreements with most European countries, but double check with your relevant foreign ministry as you may require a visa to enter the country.

On both legs of your journey, we advise you to arrive at your local airport around 3 to 3.5 hours before your departure because Israeli authorities have strict security checks.

Trains are cheaper and operate 24/7  except during Shabbat (Friday evening until Saturday evening). Usually, the last train will leave around an hour before Shabbat starts (c. 4pm on Friday). The same goes for first trains after Shabbat has ended – approximately an hour afterwards (8/9 pm on Saturday). If you arrive in Israel during Shabbat, you will only be able to commute via a taxi whose prices are regulated by the state but are still considered high – around 100 NIS to the city centre (but this can vary depending on your arrival time).

There will be free shuttles during the Eurovision weekend to and from Tel Aviv Expo. In addition, trains from the airport will have connection buses from Tel Aviv’s train stations to various locations in the city.

If you intend to travel more frequently then buy a “Rav Kav” – a top up card which will give you a discount: the more you top it the less you pay for a single ride.

Tel Aviv – the City That Never Sleeps
Founded in 1909, Tel Aviv is also a young city. Therefore, it is sometimes referred to as “The First Hebrew City”. This has contributed dramatically to its vibe – young, fresh, sassy but also a bit aggressive sometimes and high tempered.

Tel Aviv is also known as “The White City” after its chalky modernist architecture and “Achuzat Bayit” (translates as: “The Mansion”) after its historic and first district. During the nineties the city branded itself as “the city that never sleeps” to emphasise its vibe and attract young people.

In future posts will take a closer look at the host city and check what is ongot to offer so make sure you stay tuned before you pack your luggage and hit the road! Poll: Who had the best second rehearsal on May 9? 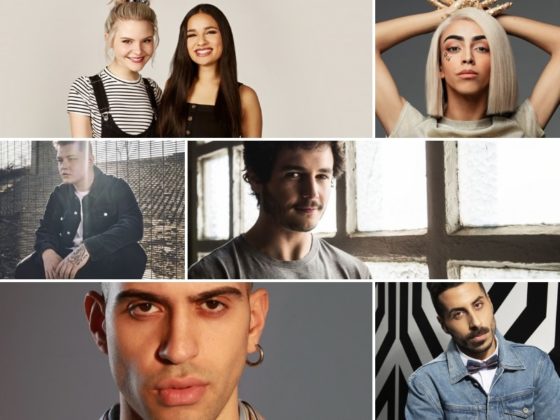 Let me show you Tel Aviv…. Most people don’t know and miss out, so it’s worth mentioning that there are taxis with regulated fares managed by an official steward/usher, BUT, mind you, these are located on the 2nd floor (!!) of the airport of the arrival hall (there are sings but most people miss them). Otherwise, if you go out straight from the arrival hall level and take a taxi from there you will pay a much higher rate by meter!! Also, as far as I know and as per the Israeli trails company web page, due to construction work,… Read more »

Thanks! That was helpful.