It’s been a while since ThisIsPopBaby revealed themselves as Ireland’s Eurovision 2020 staging masterminds and dropped a whole bunch of clues as to who the Irish act might be. But fans have taken the few hints we’ve been given and run with them. And after a whole lot of speculation, two names seem to be on everybody’s lips — Lesley Roy and ELM.

Hidden away inside Thursday’s edition of The Irish Daily Mirror was a short article declaring Ireland’s Eurovision 2020 act to be Lesley Roy. The tabloid claims that the singer-songwriter will debut her entry on RTÉ’s The Late Late Show on 6 March. Apparently, she’s written a “pop banger”. This would tie in with one of Creative Director Philly McMahon’s previous hints — that the Irish entry is “an almighty bop”.

While she has worked with the likes of Max Martin in the past, Roy is a virtual unknown in Ireland.  She enjoyed modest success in 2008 with “Unbeautiful” in the US and parts of Europe. Since then she has largely focussed on songwriting.

Hence, fans are speculating that the newspaper may have gotten its wires crossed and Roy may be the songwriter rather than the performer.

It’s not unheard of for newspapers to get it wrong. In 2019, the Daily Mail proudly announced that Janet Devlin would sing for Ireland, only for RTÉ to unveil Sarah McTernan mere days later.

Step forward ELM — a four-piece band from Dublin. They perhaps fit better with the other clues we’ve been given. Firstly, they are part of the 2FM Rising initiative for up-and-coming Irish music acts. When opening submissions, RTÉ explicitly said that it would work in conjunction with the scheme.

Additionally, the group is unabashedly LGBTQ+. Their Facebook bio lists the band members as follows:

McMahon had previously said that the selected act was LGBTQ+.

Finally, on 16 February, McMahon tweeted an image of four pairs of feet captioned “First #Eurovision rehearsal was a blast. I have such a good feeling about this!”.

ELM have eight legs between them, whereas Lesley only has two.

First #Eurovision rehearsal was a blast. I have such a good feeling about this! ???? pic.twitter.com/eLRjvlHHah

One spanner in the theory is that ELM are due to perform in the UK on 2 May. This date would clash with Eurovision rehearsals.

Also, ELM’s social media activity has split opinion. The quartet have been enthusiastically engaging with Eurovision fans on Twitter, liking and retweeting several tweets on the topic.

As a rule of thumb, if an act is teasing a big announcement or even Eurovision itself, they’re not actually going to the contest. Broadcasters generally have very strict rules about what acts can and can’t reveal online.

However, Ryan O’Shaughnessy is a notable exception to this notion. Ahead of his confirmation as the Irish representative for 2018, he made a post on Instagram which promised big news.

RTÉ has yet to make any official confirmation.

What do you think? Could either of these acts represent Ireland at Eurovision 2020? Are they working together? Let us know in the comments. 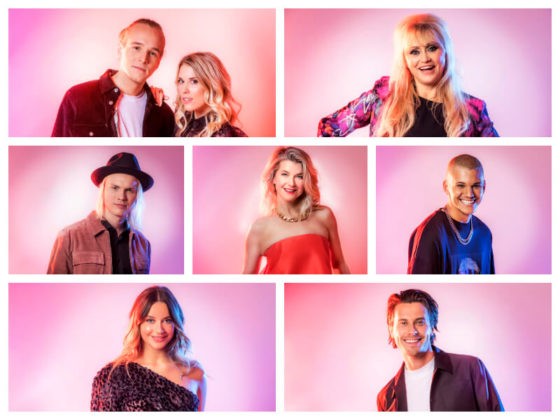 So maybe not Golden but another song written by Lesley and performed by Elm maybe?

“Golden” is dreary dated rubbish that sounds like it was cobbled together out of synthesised drum beats sampled from Now That’s What I Call Music 1998, so if it is Ireland’s entry then all this build up and intrigue has been for naught.

Have you learned nothing about not online trolling people and being nice? Obviously not, how dare you be so mean about a song. You go and write a song better than that, I’ll wait… Eurovision fans need to get it into their heads (most already have) that this is a SONG CONTEST and there is an endless list of different genres of music, some people will like and others people won’t like. Calling a song dated and rubbish is just uneducated and ignorant. This band just like every other is out there trying their best to do well and people… Read more »

A song is not a person

What does that even mean? So what the song wrote itself did it?

Golden is quite good, but you’d have thought RTE would have accompanied it with some fanfare if it was actually their entry

Elm would be such a good Choice

Elms new single was released today and its 3:08 long so I reckon it will be them…. if it is then I am disappointed! We were told it’s a song we will dance to for 10 years and it will be an Italia 90 moment…. this song is neither of those thing! I get that it will have its fans but it’s the same as ever other modern pop song, and they already ALL sound the same! Bottom 5 in grand final is my prediction

I feel like Ireland is hyping their entry way too much and that whatever they have in store is going to be disappointing.

Those four people are ELM btw (Dylan is the lead singer).

ELM would be an incredible choice for Ireland. Definitely the style of music I listen to.
Lesley Roy not so much

So it will probably be Lesley Roy

I give up lads. It’s all too perplexing and puzzling for my feeble mind to guess who it is.

Actually, for a minute there I thought one of those pairs of socks look like a pair of socks I have….I was beginning to think that maybe it was me who is representing Ireland ….the whole thing is so deceptive

P.S. Golden would be a great title for Ireland’s entry, seeing as it is the 50th anniversary of their first win.

Have you? It clearly says the papers have got it wrong before. This did not come from RTÉ, so it’s not confirmation.

100% not ELM. It was confirmed a few weeks ago that the performer of the song is female, Irish and hails from Dublin, but is currently residing in the US and has lived there for the past 10/15 years.

The Mirror also confirmed Niall Horan last year. Trusting the Mirror for your gossip is like trusting Fox News for your world news.

Breaking right now: Phillip McMahon just put on twitter a blank picture that is literally just a pale pink with the caption “We hit a very beautiful #Eurovision milestone today. Team Ireland is not playing about. We are here to COMPETE”.

What does the clue mean. All we have is Pink!

This hype they are trying to build is killing me. I want all of this to be grounded, but I obstinately refuse to get my hopes up!

She has a wife

Nah, I don’t think it’s either

That teaser photo looks like one woman and three men. It could be a group, or it could be the lead with three backing dancers/singers. Why don’t they just announce it?

I don’t get it either.
The same applies to Cyprus, North Macedonia etc.
They reveal the song tiles, but don’t even reveal the dates when they will release the songs.

I hate it when countries are waiting for the last minutes, just to create “hype”.
I mean, we’ve seen how this turned out last year.
Quite unnecessary!

You people obsessed with gender – did you bother to read the article? ELM contain three cis-gendered men and one trans man. You have just bordered on the possibility of misgendering someone! (If indeed it is ELM)

Yes, Jake, I did bother to read the article. I said “looks like” and besides, I wasn’t referring to ELM. We don’t know who is in the picture. The article is not as specific as you – it says Ca is transgender, it doesn’t say if s/he is a transgender man or woman – and actually, Ca seems to identify as a non-binary “they” instead of a trans man – so it seems like you are the one who has misgendered.

I don’t think Eurovision has ever had a non-binary performer. That’d be cool!

Also Irish fans have gotta be the worst for spreading fake rumours, as soon as any artist shows any sign of an announcement the rumour spreads around that that artist is doing esc when they have absolutely no intention to lmao

Didn’t Sarah tease an announcement the day before too? I don’t think it’s ELM, they’re just using the hype to promote their new song and gain fans which is completely understandable. Their new song would fit so well in esc and would be a complete turn around for RTÉ. Unfortunately i don’t see it being them. I don’t see the point of RTÉ 2fm in this process if they select some random woman who lives in the United States as our act? Isn’t their purpose to promote and support up and coming Irish talent? Makes no sense if you ask… Read more »