The Eurovision 2021 season is now in full swing and no doubt fans will have the songs from this year’s contest on repeat until we crown a winner in May. But that doesn’t mean we forget about the artists from past contests – they’re still brining us a lot of new music to enjoy.

Lindita received the ticket to Eurovision 2017 after winning Festivali i Këngës 55. This year, the singer is entering another of Albania’s well-known festivals – Kenga Magjike 2021. Lindita has now revealed her entry for the competition before the semi-finals in May. “Pa t’pa” is an emotional ballad with a mixture of piano, string and drum instrumentation. Lindita sings to her ex-partner and tells them she wishes they were still together: “How long has it been without you? / I do not understood why we are separated / How much I miss you / I love you, I love you”.

Following on from her last collaboration with R&B singer Alizzz, Amaia is again pairing up with a Spanish male artist. This time her music partner is the rock singer Mikel Erentxun, who joins her on a cover of “Esos ojos negros” (Those Black Eyes). The song was a 1986 hit by the Spanish band Duncan Dhu, but Amaia and Mikel have given their version a laid-back country-rock feeling.  (Robyn)

Weddings are a time of love and commitment between two people. But when it comes to the reception they’re also a time for partying, and it’s that feeling Iveta Mukuchyan taps into for her new single. “Mets Haykakan Harsaniq” (Great Armenian Wedding) is an upbeat ethno-pop song fuelled by post-chorus brass instrumental sections. For the accompanying music video, Armenia’s Eurovision 2016 star leads an all-female wedding band who perform for a room of male mannequin dolls. This is interspersed with clips of actual weddings.

Eugent Bushpepa’s latest single is “Mos Thuaj Me Fal” (Don’t Say Forgive Me). Starting off slowly and accompanied by piano, the Albanian star then adds in plenty of guitars and drums. From there on, the Eurovision 2018 star delivers another compelling rock song with drive and passion.

Olivia Rodrigo’s “Drivers License” is one of the big international hit songs of 2021 and it has attracted cover versions in all sorts of styles. KEiiNO have joined in, with a synth-pop take on the track. While their version has a more danceable arrangement, Tom and Alexandra still convey the melancholy and heartbreak of the lyrics. And being a KEiiNO track, Fred is there with some joik vocals, which perfectly add to the emotional peaks of the song. KEiiNO’s “Drivers License” is a very necessary take on the hit song. (Robyn)

Iceland’s Svala utilised her own personal experiences when crafting her new song “Þú togar í mig” (You push me). It’s a ballad that oozes emotion thanks to the Eurovision 2017 star’s delicate yet passionate delivery. The song discusses the emotions that someone feels when a long-term relationship comes to an end. Svala commented further about her inspiration for the song on social media:

“When characters have been a part of you and your life since you were a teenager and you have decided to go in either direction, you go through a long grief process that you have to work through. This process takes time and you have to find peace and tranquillity though. […] It’s amazing how music and lyrics are healing and help one to understand the journey and work out conflicting emotions and give one a certain peace of mind even though one often feels missed.”

Tim Schou participated in Eurovision 2011 as part of the band A Friend In London. Following the group’s split in 2014, lead vocalist Tim Schou began his solo career. Now, ten years after hitting the Eurovision stage, the Danish singer has released his debut solo album Hero/Loser. The LP contains eleven songs, including recent singles “Where You Are”, “Comeback” and “Mad Love”. The other eight tracks generally continue Schou’s mid-tempo to upbeat indie-pop styling, though there are a few ballads thrown into the mix as well to showcase Schou’s more emotional side.

With a career spanning over 15 years, Tina Karol knows you have to mix it up in order to stay relevant in the music industry. And that’s what the Ukrainian star has done for her new album Красиво (Beautiful). Leaving the ballads behind for a moment, Karol delivers seven mid-tempo to upbeat tracks, including previous single “Скандал”. The Eurovision 2006 star mixes pop with elements of hip-hop and R&B, and there’s somewhat of a retro 2000’s feel to many of the songs.

Karol has also released a new music video for the album’s song “Хороший парень” (Good guy). The video begins with a robbery, as a group of people steal some important information. Tina, dressed in an orange balaclava, then proceeds to show off her hip-hop dance moves.

Connect-R is an in-demand artist. His latest collaboration is with Shift for the song “Rock ‘N Roll”. The Romanian rapper, who represented Moldova at Eurovision 2006, adds some of his rap skills to the mid-tempo jam. The two artists rap about how they could rock the life of a potential lover: “Let me light it / Baby’s rock ‘n roll / Baby’s rock ‘n roll / I got into the role”.

In 2020, Luca Hänni finished third on the 13th season of Let’s Dance Germany (the country’s version of Strictly Come Dancing / Dancing with the Stars). Since then, the Eurovision 2019 star has been in a relationship with his dance partner from the show, Christina Luft. Now, Luca has dedicated a song to his girlfriend. “Wo Warst Du” (Where Were You) is a pop ballad in which he says his search for love is over now that he’s found Christina: “Where were you all my life / I waited, but now you are there / Every path I’ve gone suddenly makes sense now / Because I finally got here with you”. The music video features the Swiss star singing from a balcony, and this is intermixed with home video footage of Christina.

Edsilia Rombley isn’t just sitting idly by while she prepares to host Eurovision 2021 in May. The Dutch star has kept up her new musical releases and has now dropped the song “Rustpunt” (Resting point). It’s a solid pop song with a danceable chorus. Edsilia shows off a few dance moves in the music video and boogies alongside one of her daughters (her other daughter also makes an appearance at the very end). The two-time Eurovision contestant also makes history as the first Dutch artist to film a music video in an XR (enhanced reality) studio. Edsilia wrote on Instagram about why she wanted to get her daughters involved with this song:

“I dedicate this song to my two children. This past year has been so difficult for everyone, you’ll just have to deal with it as a child; not being allowed to go to school for a while, seeing far fewer friends, not being able to exercise for a while and not being able to hug family members anymore. I try to hold them extra well and support them where I can and always be there for them!”

Ana Rucner is showcasing a love of animals with her latest song. The cellist has teamed up with rapper Soma Dollar and singer Minea to create an anthem for Zagreb Zoo. Titled “Zoo Song”, they tell us all about what you can expect to see at the attraction: “What to see in Zagreb is a difficult decision / Not to go to the Zoo is a big mistake … In the Zoo there is a party, party, party / Get dressed and stop by, stop by, stop by”. Rucner, who competed at Eurovision 2016 for Bosnia and Herzegovina, adds her cello accompaniment underneath Soma Dollar’s rap verses and Minea’s singing in the chorus.

If you want more from Ana Rucner, she has also recently released the new song “Esma” to streaming platforms. She originally performed the upbeat folk-pop song alongside Orkestar Elvisa Bajramovica on TV in October 2020.

Colibri is a parent-run organisation that aims to support children with disabilities in Bosnia & Herzegovina. During some of their sessions, they created the song “100% se volimo” (We love each other 100%). To spread the message further, Colibri asked some of the country’s singers to get involved – this includes Eurovision 2016 star Dalal. The Bosnian singer also went to visit some of the children that the company supports whilst filming the music video.

Minus One – “Oh Pretty Woman”

Minus One continue their series of covers with “Oh Pretty Woman”. The song was originally performed by American Blues artist Albert King in 1966. Cyprus’s Eurovision 2016 band naturally turn the blues song into a rock offering, with plenty of electric guitar action. The accompanying music video follows a woman as she goes about her day – from waking up, to going to work, to enjoying an evening meal with friends.

Finnish star Erika Vikman is ready to live her life without “Häpeä” (Shame). In her new song, she sings to her inner saboteur and declares that it’s time for them to leave so she can proudly be herself: “This is your stop / You’ll get off here / It’s time for me to be who I am / Without shame”. Sonically, the song is influenced by the recent 80s trend, but it amps everything up a notch to deliver a dynamic track. The accompanying music video is also retro in style and sees Erika facing up against her inner self.

Swiss singer Ilira, who competed at Die grosse Entscheidungs Show 2011, has recently collaborated with British artist Amber Van Day. Their new single, “See You In Tears”, is a bad-ass pop track that sees the pair taking no prisoners. Ilira and Amber sing to another woman who is going after the same guy as them: “To be honest / I just wanna see you in tears / Punch your face and break your veneers […] Why you such a b*tch, b*tch, tryna steal my man”.

Vanotek finished second in Romania’s Selecția Națională 2016. The record producer and DJ has since gone on to achieve a number of hits and even charted in Poland and Russia. His latest single is “Someone”, which features vocals from Denitia. It’s a catchy progressive house track that also has an emotional touch underlying it. 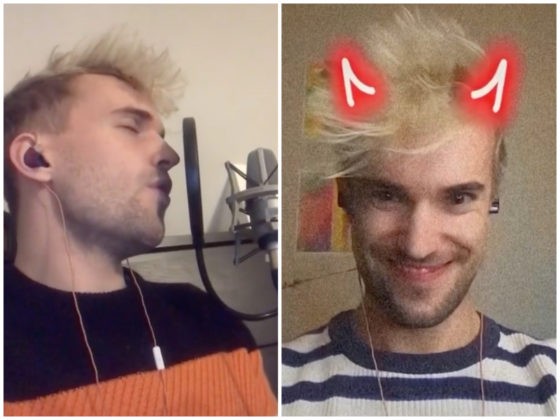 Last Thursday “One more” was published, too. It’s the new collaboration of Michela and The New Victorians.

I’m sorry but Ana Rucner isn’t Bosnian, she is Croatian, from Zagreb

Love “See You In Tears”!

Luca Hanni’s song is my favorite on this list. He also had a great Eurovision song and live performance.

This week I am for the ballads: The songs from Lindita and Svala are really beautiful!

We covered Samira’s “Mataha” following its release in March 🙂
You can read about it here: https://wiwibloggs.com/2021/03/21/new-music-from-samira-said-il-volo-benjamin-ingrosso-and-more/263177/