At Eurovision 2018, he rose out of a piano like a vampire. But for Halloween 2021, MÉLOVIN faced a spookier challenge by competing in the top six of Tantsi z zirkamy 2021. Sadly, the spirits were not on his side, and MÉLOVIN was the latest contestant to be eliminated from the show.

This means that, after Jamala was voted off a couple of weeks ago, all Eurovision stars have now been eliminated from the current season of Ukraine’s Dancing with the Stars.

Oleksandra Zaritska and Dmytro Kadnay – alumni of Ukraine’s national final Vidbir – both remain in the competition.

MÉLOVIN has had a rather rocky ride on Tantsi z zirkamy. The singer usually found himself near the bottom end of the leaderboard each week, finishing last on three occasions. However, MÉLOVIN has continuously persevered and challenged himself to keep improving.

For week nine of the competition, MÉLOVIN and his professional partner Liza Rusina performed a tango. A passionate dance, the pair brought the fire through their partnership (and clothes and pyro).

One of their most successful dances, the judges awarded them 25 points out of a possible total of 30. Unfortunately, this still placed MÉLOVIN and Liza second-to-last on the leaderboard – with this being the later stages of the competition, the standard is high.

In previous weeks, MÉLOVIN was usually saved by the public vote thanks to the support of his fans. However, it wasn’t enough this time and the “Under the Ladder” singer found himself in the dance off. There, he faced off against KAZKA vocalist Oleksandra Zaritska.

In the end, the judges saved Oleksandra. This meant MÉLOVIN’s journey on Tantsi z zirkamy had to stop at the top six.

Known as a slightly outlandish performer, the Eurovision 2018 star didn’t shy away from bringing this to the dancefloor. From performing as a merman, dressing up as Cruella de Vil for movie week, and celebrating his coming out as bisexual, MÉLOVIN has certainly left a lasting impression on the contest that will unlikely be replicated.

? The theme on Dancing with the Stars Ukraine this week was “the year that changed lives”

After making it through the dance off, Oleksandra Zaritska will continue onto next week’s show. She’ll be hoping to improve upon her position from this week. Her Viennese waltz with partner Yuriy Meshkov scored 24 points, which meant they were last on the week nine leaderboard.

Also dancing next week will be Dmytro Kadnay, who will be hoping to perform in person again. The leader of band KADNAY had to miss week eight of the competition after testing positive for Covid-19. Under the rules of Tantsi z zirkamy 2021, a contestant is only allowed immunity for one week; thus, Dmytro had to perform again in week nine or withdraw from the competition.

The small sticking point was that Dmytro still had to remain in isolation. Therefore, through the power of modern technology, the Vidbir alum danced remotely. His partner Alina Lee was in the studio and performed in front of a giant screen that broadcast Dmytro into the room. The pair’s remote freestyle routine earned 26  points from the judges, placing them joint third.

Below you’ll find a roundup of the dances MÉLOVIN, Oleksandra Zaritska and Dmytro Kadnay performed during episodes eight and nine of Tantsi z zirkamy 2021. All scores are out of a total of 30.

You can review our previous articles for the results of:

What did you think of MÉLOVIN’s performances on Tantsi z zirkamy 2021? Do you think either Oleksandra Zaritska or Dmytro Kadnay can go on to win the competition? Let us know in the comments below! 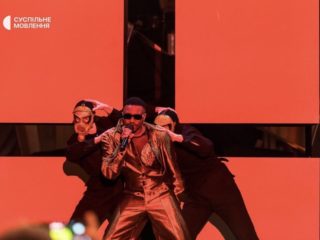 breaking news @hottopicsesc is back