Vebooboo: Well we’ve been asking the question for some time now regarding Ivi’s ability to sing La La Live. Watching the first rehearsal reminded me that sound editing is an amazing thing, because even though Ivi’s voice isn’t by any means bad, the quality is just so different from the crisp and peppy version I’ve been replaying over and over again on my iPod.

More importantly, the staging just kind of confuses me. Ivi spends half of it standing on top of a bridge made out of books. Um, when in the song does she refer to anything remotely academic to justify this concept? I’m ruul ruul tempted to spend a euro and give girl a call and beg her to spice up the act a bit more. There should be a guy out there whom she’s singing to and trying to get. And there should be a bit more sauciness–right now the alfredo combination she’s producing is a bit bland.

We had hyped this up as a serious Top 15 contender but I’m not so convinced anymore. Can Ivi bring it next week???

Deban: Just when the rumour was beginning to take a foothold, Ivi Adamou emerges from the shadows of recession with three attributes. Beauty (as evidenced by her smouldering aesthetic), Brains (the bridge of books on stage) and Voice (her actually singing live–not lip syncing). Clearly the focus is on her vocal delivery, and group choreography. The backdrop is very disappointing! She could have done so much more..even if it’s just flags and balloons, it would have worked much better. This performance reminds me of Belgium 2006 (Kate Ryan’s “Je T’Adore”). A performance so great, and so upbeat but somehow didn’t make the cut. We were all so carried away by the song prior to the show, that we overlooked the many imperfections on the D-Day. I hope Ivi Adamou doesn’t suffer a similar fate.

Wiwi: Is it just me or did Ivi Adamou sound like a man today? Her voice was seriously deep — or maybe it was hoarse from shouting too much the night before? In either case, I am not in la la love with this song, and I think the staging is la la lousy. Of course, we must remember that Ivi is not yet in full costume. Given the books — a symbol of learning — I suspect she’ll continue the Greek goddess theme she started in her official music video. That could be pretty powerful, especially given that the LED backdrop hints at ancient Greece in a rather effective way. 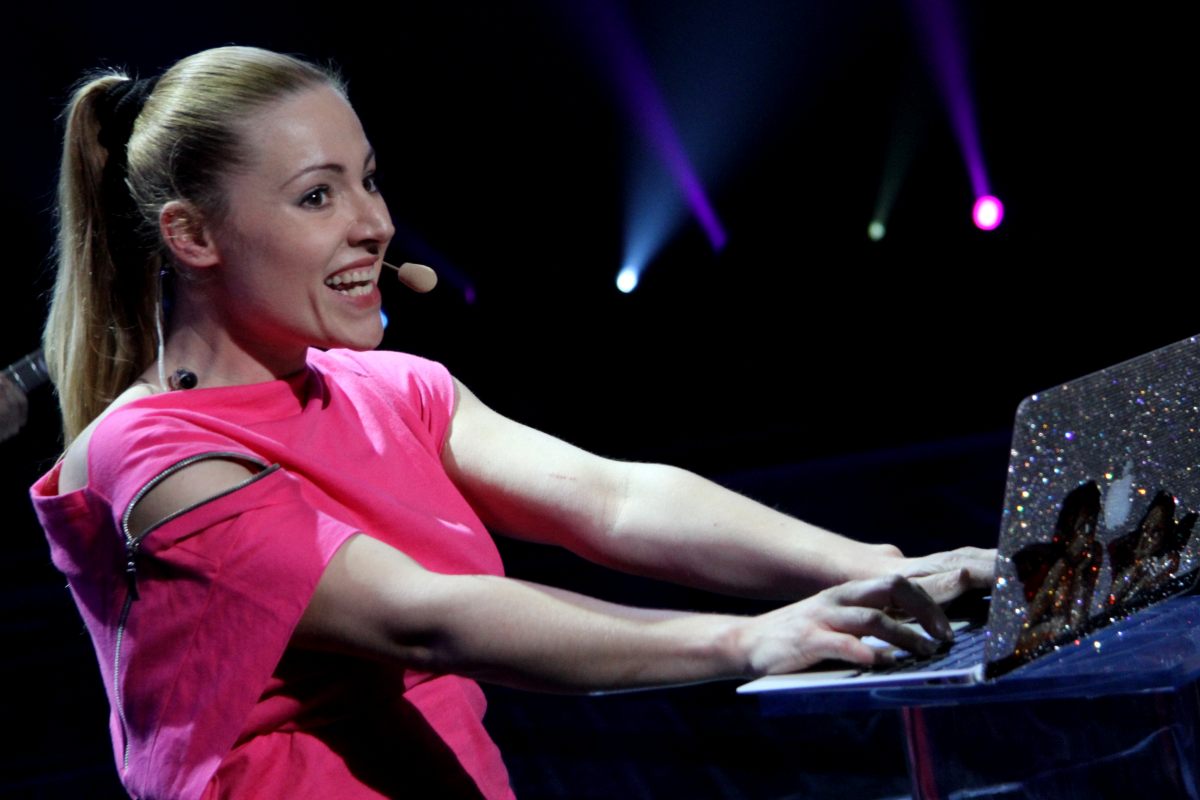 As you may have understand, there is no greek goddess in the official clip. It’s a tale of a young girl. You should have noticed the lyrics. Though I am Greek, I prefer Ivi. Her song has better lyrics, she has improved her choreography and dance, and her clothes are less revealing. I didn’t like the books in the first place, but the whole thing deserves a place in the top 5 or 6. The message is complicated, but it probably has to do with books of fairytales or books of a young girl. I certainly do not like Sweeden’s… Read more »

Actually MF, the girls are both from Cyprus and they only live about a 10 minute drive apart – I don’t think they really want to exert themselves too much at this stage! But they are both beautiful and I wish all the best – by far the best song Cyprus has made!! Zito Kypros!!!

the whole concept is about fairytales – the song’s about the sadness that she had and the prince that came, the videoclip is about Cinderella and Sleeping Beauty, and the live apperance is about the happy ending of the fairytale, a girl dancing on books with her friends.
This is a CONCEPT, the song may be mainstream and with few lyrics, but the whole thing is very well projected? and designed and not much of a simple idea.
That’s why you have the background and the stage of books.

Somehow this reminds me of “Malenkiy prints”, by Katya Ryabova.

Her voice sounds really bad, but then again, she probably didn’t give it her all for the first rehearsal. If it doesn’t improve by the second rehearsal, then we should start worrying.

Considering that Greece have always finished regularly in the top 10 since 2004, I think this would motivate Cyprus to outdo Greece this year. I wouldn’t be surprised if Cyprus manages to end up in the top 5 this year and I’d absolutely be proud of Ivi if she achieves it.

After seeing Eleftheria’s performance I would definitely say Ivi so far has the better voice and performance, in the first rehearsal E’s voice became completely flat after the first minute. Cyprus hasn’t done well the past couple of years and I therefore wish Ivi all the best in Baku!

Meh. Seems like this year’s Rockefeller St–heavily hyped pretty young girl who placed 4th on singing competition in native country but still isn’t a brilliant singer with an insanely catching modern dance-friendly pop song. No doubt it will qualify but I see it flopping in the final.

Much better than Greece!

Not impressed at all. And she looks better in the video than in “reality”. Now I have no doubts that Eleftheria from Greece is both: better looking and better singer. Saying this, I think it’s time to stop qualifying with these types of songs and let other countries have a chance to final.