The fashion disasters at Eurovision 2015 came thick and fast, but in the end one woman has earned the distinction of being the biggest trainwreck of them all. The Netherlands’ Trijntje Oosterhuis — she of the cut-out funeral dress and Aladdin jump suit — has won the Barbara Dex Award 2015. Voters handed her a smashing victory in the contest, throwing her 1,324 votes, more than double the tally of runner-up Bojana Stamenov from Serbia.

During the first semi final Miss Oosterhuis went for an all-black Aladdin-like outfit. What she deemed fantastic and edgy left Europe asking why? why-ayayayayay? Ahead of the results, our readers agreed that Trijntje should follow Vilija and get the award, and so it happened. Good eye, y’all! Serbia’s Bojana Stamenov and her shiny grey tunic finished second in the Mount Olympus of fashion crimes this year with 605 votes, while Electro Velvet and their LED-costumes followed in third place with 397 votes. Bianca’s oversized battery pack — strapped to her back — was more terrorist than high fashion. Not. Cute. 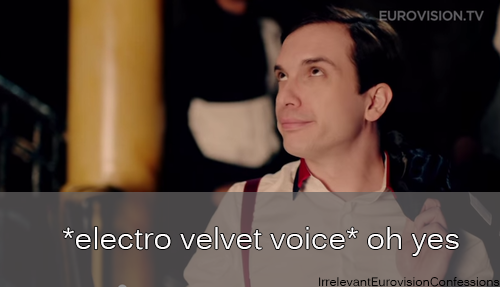 Eurovisionhouse.nl, the Dutch website that organizes the awards every year, received 4,163 votes. Here’s the Top 10.

Every year, the Barbara Dex Award is bestowed upon the artist with the most unfortunate outfit. Past “winners” include Verka Serduchka in 2007, Rona Nishliu in 2012 and t.A.T.u. in 2003. The award honours Barbara Dex, the Belgian representative in 1993 who represented her country with this home-sewn creation. Hideous and see-through, it lives on in our memories…even if her song doesn’t.

Do you agree with the results? Was Trijntje the worst dressed this year or did you spot someone even more offensive? Tell us below!

Eurovision 2015: The best and the worst of the red carpet

Following the Opening Ceremony of this year’s Eurovision Song Contest, we asked our readers to decide who worked the red carpet best. Below you can check out who came out on top — and who flopped. I’m curious to find out what blog system you happen to
be using? I’m having some minor security issues with my latest blog and I would like
to find something more secure. Do you have any suggestions?

No surprise here. It’s the closest thing I’ve seen to this:

Trijntje should have stuck to her first outfit.

Nothing but love for the most amazing and beautiful voice in the world. She could sing in a the most ugly dress and I couldn’t care less. I’m glad to know that she doens’t care about that either. Trijntje is a true artist, a true singer from the heart Sadly one of a few left in the music world… But what would people, who are not so happy with their lives and themselves, do when they can’t bring other people down to feel better about themselves. It’s one of the most ugly traits of human kind.

Come on, Moldova, Armenia or Georgia should be top three.
Trijntje does not deserve that.

No doubt in my mind that Trijntje was the worst dressed.

I heard that Cyprus got only 2 votes, and then came last in Barbara Dex voiting, so he had the nicest clothes????

Genealogy! I forgot about how ridiculous they looked. I must have been too distracted by the earbleed inducing song…

Well compared to Trijntjes dress, Barbara’s is quite reasonable…

Well epic fail, my country wins it this year..

Mans wore the perfect outfit, I really liked that combination! I want some leather pants too and I really want the grey shirt with that.

How can Serbia be so high up? I thought Bojana looked very nice! Same goes for Albania, Iceland, Latvia and Armenia, and even the Netherlands, though the outfit looked a bit goofy. This year most artists wore pretty conservative outfits, so I guess those who did something a little bit different stuck out and got more attention, thus making it to this list. I voted for Moldova, that was actually pretty bad.

Deserved! 😛 But why Serbia 2nd? I think her dress was nice xD I voted for Måns Zelmerlöw. A grey shirt with an black leather trouser. Ugh

I don’t get how Sweden’s isn’t worse – it’s just a shirt and horrible leather trousers (who even wears leather trousers apart from bikers and people in certain sexual costumes). Even Finland put in more effort than Sweden!

why Aminata entered the Top 10? Her dress was very good. I don’t understand how Trijntje and her team thought her outfits were appropriate for this catchy song. The whole performance was too dark and she looked hideous. Don’t blame it on Eurovision or bloc voting, but on your inability to do a proper job. Her second outfit looked better, although it wasn’t good as well. Her slutty widow one was better than the one we saw in the semifinal. Trijntje’s career will be fine, she’s an established name but it was a bad decision to leave The Voice. She’ll… Read more »

You can see that Trijntje feels more confindent and she shines more in her first dress than the one in the semi final. The last one was terrible and also the backing singers. Her best dress was in the second rehearsal. Sho just looked older in the semi final, the dress isn’t that elegant … I think there was more in it for The Netherlands .. :-/

The majority of the artists’ dresses this year were too formal and conservative (some are even just black and white). Just look at Cyprus, Italy, Belgium, Czech Republic, Estonia, etc. They are safe to make it in this kind of award.

Still hope that her ESC loss doesn’t spell an end to her career in The Netherlands. I heard that she’s one of the coaches on The Voice of Holland..

@Huh, there wasn’t really many bad dresses this year. I think Serbia, the Netherlands and Moldova are the only horrible ones (especially his backing dancers & singers).

I think UK shoulda edged her out, but she’d be my second choice. Werk it Trisha <3

Yeah, Trijntje definitely made a good choice not to go with that first “widow” dress, but the new dress didn’t really help improve the staging or the background… By the way, a close friend of mine who works at SVT’s finance department said that he knew which cities were still in te running for the contest! According to him, the Swedish Eurovision-delegation had sent in budgets for the different arenas who they want to see host the event: Tele2 Arena, Scandinavium, Linköping and Ericsson Globe Arena (Stockholm). Fingers crossed it will be Tele2 Arena, but the city/arena will most likely… Read more »

Understandable! What were they thinking? She should fire her stylist, if she has any…