Every day until December 24, we’re stuffing your stockings with a new Eurovision poll and asking for your opinion about important matters such as which male and female Eurovision star you want under your Christmas tree and which past Eurovision singer was the best host. Consider this our advent calendar for 2015. Whether you celebrate Christmas or not, you can let us know your thoughts each and every day by casting your vote and sounding off in our comments section. Time is running out before Christmas, so let’s hurry to today’s poll!

This year we celebrated the 60th Eurovision Song Contest. Since 1956, we have seen total of 63 winners and over 1400 songs. We’ve come from just black and white to contest shining in all colours.

But which of the first 17 winners is your favourite? We have listed all the winners from 1956 to 1969 and you have to choose the best out of these. Check the box next to all your favourites’ names and press submit. You can vote for as many songs as you wish, but your vote only counts once.

Lys Assia sang “Refrain” for Switzerland and was crowned as the first ever Eurovision winner. At the first edition of the contest, each country sent two songs. Lys sang both the Swiss entries, but the placement for her other song, “Das Alte Karussell” — or any of the other songs — was never revealed. Lys later returned to the contest twice more and has been invited as a special guest in past years.

Again in 1960, France won the contest. Jacqueline Boyer left United Kingdom and Monaco behind with her song “Tom Pillibi”. Jacqueline was invited to perform at the Euro Fan Café in Vienna this year.

Gigliola Cinquetti was the clear winner of 1964 contest. She was the favourite of half the juries and left United Kingdom behind by 32 points. Gigliola later returned to the contest and placed second with “Sì” and hosted the contest in 1991.

France Gall took Luxembourg their second victory in 1965. “Poupée de cire, poupée de son” was different from past winners by being an uptempo pop track. The song was translated to almost 20 languages and France herself recorded it in French, German, Italian and Japanese.

Austria debuted in 1957, but had to wait until 1966 to win the contest. Udo won the contest on his third time, after finishing sixth in 1964 and fourth in 1965. Austria had to wait for their second victory until 2014.

After finishing second for four times, United Kingdom finally managed to win the contest. “Puppet on a String” topped the charts all over the Europe and stayed at the number one spot in United Kingdom for three weeks.

“La, la, la” became Spain’s first winner in 1968 — even most of the lyrics were “la” after another. Massiel won over British superstar Cliff Richard by one point.

The 14th edition of the contest was close to erupting in chaos, as four songs topped the scoreboard with 18 points each and the producers had no tie-break system. The solution: all four songs were declared winners. The first of them was Spain’s “Vivo cantando”, performed by Salomé in a dress made of porcelain beads. For the first time a country won the contest two times in a row.

Lulu got United Kingdom their second victory with “Boom Bang-a-Bang”. The song became the biggest commercial success of the four winners and was recorded in many languages.

Lenny Kuhr accompanied herself with guitar when performing her entry “De troubadour”. This was the Netherlands’ third victory. 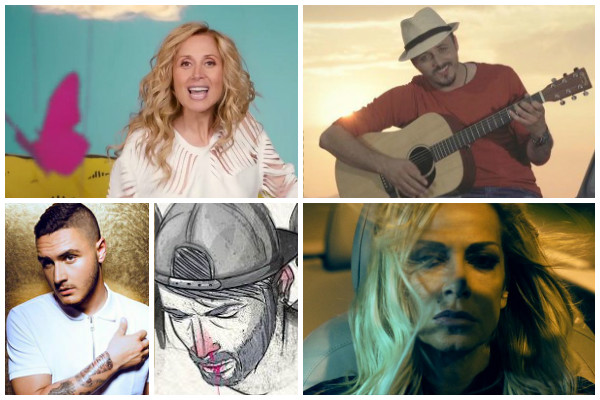 One thing I notice about these past Eurovision winners is that a fair few of them can’t actually sing that well :s

I love Poupée de Cire, Poupée de Son. The song has so much innuendo and double meaning. But with latter songs Serge went to far, playing with her innocence and in the end France Gall worked out was going on, and cut all ties with him and left the business for decades. She will never talk about her ESC song anymore.

My top 3:
1. Italy 1964: Really sweet and innocent ; flawless song with fantastic music.
2. Luxembourg 1965: I don’t think anyone can say that this one isn’t catchy and memorable. Really epic music!
3. Spain 1968: Another catchy song here, epic chorus.

Recently I’ve watched all of these vintage contests and Italy 1964 is by far the best winner. So gentle and innocent! Denmark 1963 and Luxembourg 1965 are also in my top 3.

Definitely France Gall. She’s a legend, and her song is still famous today!

Serge Gainsbourg compose song for Monaco 1966, for me best song that year and lyricks for french song from 1990.

Boom Bang-A-Bang is a classic. Lulu was hilarious on stage.

Dansivise is really good I like listening the the orchestra instrumental pieces. France gal was also really good

I voted for 6 songs here :x, three of which are dutch. I like those probably because I speak dutch, but Poupée de cire, poupée de son definitely deserves to win here. That’s the first of these songs which I listened to on Mp3 non stop. Love the old age!

I feel like France Gall deserves to win because she basically changed the whole perspective of the ESC. Her song was quite fast, fun & it all changed after her.

Poupée de cire, poupée de son And La,La,La will always be in my favorites