Wiktoria Johansson is one of the few newcomers competing at Melodifestivalen 2016 — and she’s ready for her close-up. As she told SVT recently: “We want people to stop and look when I come out on stage.” Wiktoria, who hails from the sleepy town of Brämhult, will do that with her number “Save Me” — an uptempo, energetic and sentimental song about love. The 19-year-old rising star recently caught up with wiwibloggs to tell us what we can expect when she takes the stage in Malmö Arena for the second semi final on February 13. If she wasn’t on your radar before then take note: she is about to blow it up.

If you were writing this article, how would you describe Wiktoria?

Wiktoria is a young girl from a small town in Sweden who, just like most people, loves to laugh, enjoys the company of friends and family and was born with an interest and passion for music. And when nobody’s looking…she loves to dance too. [Laughs]. 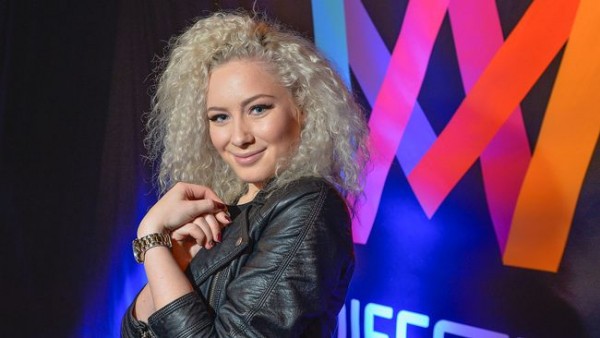 You’re performing last in the second semi-final — and performing last typically goes to really big songs from established artists. Do you feel pressure to deliver a great end to the show?

No, not yet. I feel honored that I got that spot and I hope that the audience will appreciate the show I’m gonna give.

You’re one of the few newcomers this year. What’s that experience been like, especially as 2016 is a big anniversary year, with a show full of Melfest legends?

I haven’t really thought about it. I’m just excited to be on the show. But of course it’s a fun thing that I’m competing against artists I have seen on TV since I was a child. When Christer Bjorkman presented the songs via Periscope on January 12, he categorised your song “Save Me” as upbeat and high-energy. Can we expect a club banger from you?

Yes, it’s an uptempo song. But the focus is very much on the lyrics and the story that the song brings. It’s a good pop song that catches you from the start.

And what about your stage performance?

I want to make an impression that lasts…after Malmö I want people to remember what a great performance and show I gave.

Out with this one???? @isaofficialmusic

You’ve competed in a number of talent competitions already. Which ones are most memorable to you and why?

None in particular. I just love to compete and perform on stage. And I learned a lot by doing it.

You’ve been friends with Melodifestivalen 2015 breakout star Isa for quite some time. How did you meet?

I met her at one of the competitions I did when I was younger and we have been friends since then.

Has she — or any other past Melodifestivalen performer — given you any advice?

Yes, Isa has given me some and also Anton Ewald, who is a great friend of mine.

If you could collaborate with any of this year’s other Melfest artists who would it be and why?

I would choose to work with Albin and Mattias. I really think they are good at what they do plus they are great guys.

What’s something that SVT doesn’t know about you?

Finally, do you have a message for all of your new fans and followers on wiwibloggs.com?

I look forward to performing for you guys and I hope you will love it as much as I do! And I send you all my love! I just found this article and had to laugh at the last comment… What were they supposed to say? ‘She will pop!’ Doesn’t exactly sound right. 😉

Why write “she will rock”, when the song is a pop song`? Pop is OK…but I hoped for a rock song with that heading…I think the phrase “will rock” get misused

I love her hair!! Also, cool that she will have showdown of death with bestie ISA in this semi hahaha. Malmö will be amazing

I’m going to be in Malmö

YES! Melodifestivalen really is back 🙂 Anyome gonna be in Malmö?! Wiktoria must have a killer song if they are putting her after ISA, Krista, etc ! <3

THANK YOU FOR THIS! I knew nothing about her and now I think she’s the sweetest. Can’t wait to hear her song!