She’s been compared to Taylor Swift for her gorgeous blonde locks and her country-pop sound.

And on Thursday morning Slovenia’s ManuElla proved there’s even more in common as she owned the stage like an established international pop star.

The “Blue and Red” singer exceeded our expectations with strong vocals, great staging and a token Eurovision gimmick. And then there is that dress. The form-fitting number features a lovely cross-strap pattern across the chest that proves ManuElla is definitely breast in show.

The performance begins with a smokey spotlight focused completely on ManuElla. As the camera pans out, the LED floor is illuminated beautifully with spots of red. Leading into the first verse, producers project her face onto the LED wall miming along to the lyrics. The stage is flooded with, unsurprisingly, blue and red lighting. As we venture into the chorus, the angled LED screens along the back pop with dozens of pairs of eyes, which we presume are ManuElla’s. It offers a window into her soul and into the pain of her song.

In something of a WTF moment, a muscular and well-oiled man spins around on a pole. He’s giving us Olympic gymnast realness, owning his tight leggings and toned physique. This gimmick seems a little unnecessary, especially when his tricks are disrupted by a huge amount of fireworks shooting towards the roof. He might catch on fire!

Slovenia may struggle to qualify for the final being sandwiched between Australia and Bulgaria in the running order, but the performance truly does stand on its own and this could end up as a borderline qualifier. 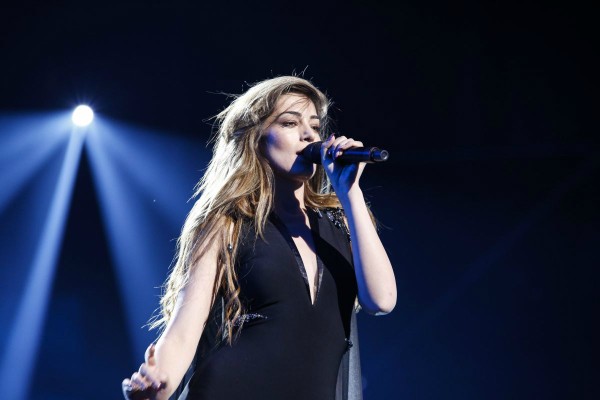 Poll Results: Iveta Mukuchyan had the best first rehearsal on May 2 Bulgaria: Poli Genova lights up during first rehearsal of #ILWAC

When this song won the Slovenian national final, I was really excited! I listened to it on repeat many many times for days, but after that somehow it just…dissapeared from my mind. Maybe it’s my fault for over-exposing myself to the song. In any event, I still love it and really hope that, somehow, it will make the final. Fingers crossed!

P.S. yes, lose the pole-vaulter, dancer, whatever! He doesn’t serve any purpose whatsoever!

No Blue and red huh?
She’s adorable but I’m not sure about the song.

Wow, this is such a guilty pleasure. At the beginning, it was my #38, now it moved on #23, after video. Lyrics are stupid, but rest is OK.

This song is just boring as hell to me. No staging can save it from my bathroom break.

Well this song could be the anthem of this year’s ESC stage, all the countries using blue and red.

Slovenia is opening after the break, due to the set-up of equipment for that acrobatic guy. So its not so bad in positioning. Notice how SVT seems to have placed two of the more visually stunning and apparently two best vocal performances, after the break with Czech Republic and Slovenia. This could get both a higher than expected public vote number.

Although the song is my #42, I think ManuElla herself was good today. But, the dancer needs to go and I’m not sure about the projected eyes either.
I neither think this should nor will qualify.

I loved Angunn and her song in 2012, she was really underrated!

better than Iceland, Dona, Azerbaijan at least she sings confidently

It’s a good song, it’s very underrated. I love the staging and her dress, but the man behind her is a little unnecassary…

this isn’t the first time an acrobat appears in eurovision. In 2014, Azerbaijan’s entry had a female acrobat.

I love William’s enthusiasm with all the entries, you can see he really enjoys living all the rehearsals, but I would prefer him to be more critical so I can rely more on his opinion. now it seems like he likes ALL the entries (a final with 41 countries Lol), the other guys have more differentiated opinions, and this is good for us who are not there, to make us a better opinion of what is going on in stockholm… kisses guys

For that William, everyone will qualify or is a ‘borderline’…
Muile houdn!

“Slovenia may struggle to qualify for the final being sandwiched between Australia and Bulgaria in the running order” I think so, too.

Yes its an underated song but no…no for the final…

And her music video is good

I like this song more than say Latvia……he seems to be screaming to me …..sry