He’s the singer-songwriter who took Romania to third place at Eurovision 2010 along with Paula Seling, before returning again in 2014.

And on Sunday it became clear that Romanian-Norwegian Eurovision star Ovi Jacobsen still has the Eurovision bug, as it was revealed that he has produced “Contigo” — the Objetivo Eurovisón song from Mirela.

Singing to the man of her dreams, Mirela speaks of love and wanting to explore the world by his side in her upbeat, feel-good track. It’s a slice of summer and one filled with love (not to mention a bit of baila la la). There are no fears, she says, just the dream of building a life together. Sign me up!

Ovi’s knowledge of the Eurovision landscape may explain why the song has already struck a chord with Eurovision fans.

We launched our Objetivo Eurovisión 2017 poll earlier this afternoon. It’s only been three hours, but we’ve collected 1,778 votes and Mirela has jumped to an early lead with 33.41% of them. That puts her just ahead of Manel Navarro who has 28.74%.

Ovi previously teased his participation in the Spanish selection.

On January 7 the “Playing With Fire” hitmaker shared a photo on his Facebook page with Spanish producer Isaac Luque. He was quite explicit about his intentions, writing: “No year without ESC. Not exactly Barcelona weather in Bucharest for my Spanish friend, but music keeps us warm.”

Ovi isn’t the only Eurovision veteran on Mirela’s team.

Songwriter Tony Sánchez-Ohlsson is behind some of Spain’s most memorable entries, including Pastora Soler’s “Quédate conmigo”, Edurne’s “Amanecer” and D’Nash’s “I Love You Mi Vida”.

Do you think Ovi’s collaboration with Tony and Mirela will lead to a victory in Spain’s national final? Is it the most Eurovision-friendly track? Or do you have another favourite? Let us know in the comments box below. 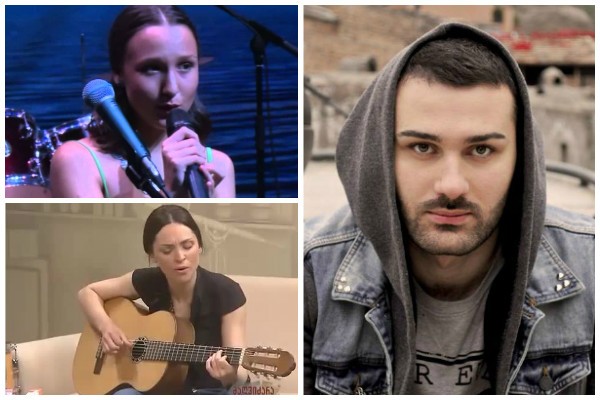 Wow! This could be one particular of the most beneficial blogs We’ve ever arrive across on this subject. Basically Fantastic. I am also a specialist in this topic therefore I can understand your hard work.

when all the so called not outdate songs sound all the same .really need bring song stand out and can make you dream and happy

My diva is better than yours!! C’mon! haha I love this schoolyard reason. NO.MORE.OUTDATED.DIVAS please

No more Lekleins, Brequettes or Bareis!! Say no no no to English invasion!

GO MIRELA!! You do represent Spain! 😉

Why did I listen to this? Now I have a headache.

GREAT job! Mirela’s song is one of the best Spanish entries ever! I hope that Spanish people are intelligent and fight against English invasion. GO MIRELA!!

If Spain wants to compete against Germany for the last position, then send this girl with this dated, cheesy, boring song and you’ll be at the bottom.

I don’t want to see my country represented by this song. I don’t really care if it is in english or spanish I just want a good song (or a song that is not terrible). There are better choices this year compared to this dated song

Good job Mr. Jacobsen! (*mode ironic off). ‘Contigo’ sounds like Rebeca’s 90s songs. Actually this song is tiresome, outdated and rambling, and on top of everything else, Mirela’s voice is two notes above the pleasant. No more old-fashioned-esc-divas please!

GO MIRELA!! We want to hear Spain singing in Spanish. Be intelligent and STOP English invasion!!

The fact that Ovi is romanian working for spanish entry, remindes me that in 2012, Romania did well with a song in spanish language. That year Spain did even better with Pastora Soler, but in general spanish language does well, hope that Spain to follow this trend and to do well, just like its language does for other countries.
Go Mirela !

Sounds like an updated version of Adelen- Bombo, I hope this or Le Klein wins 🙂

me neither F.W. hahaha

Am I the only one who can’t stop singing this?

12 points for her from Italy too! congrats Spain, great song!!

i’m not feeling the song. 🙁

I’m spanish and I’m delighted about most of the entries. But I hope she wins national final in february, I really think her song is so catchy and fresh. Good voice and better production with spanish guitar and great bass. Well done!