He conquered the heart of the Eurofans during pre-party promo tours with his energetic performances and dazzling looks and now IMRI is — once again — calling you to the dance floor with the release of the official remix of “I Feel Alive”.

Israel’s new star may be back in Tel Aviv to rehearse for the big show, but we know one of Imri Ziv’s talents is multitasking, so it’s no surprise he partnered with DJ PM and Tomer Maizner to release a proper club banger. The best part? It adds almost two minutes to the original version. DJ, drop it like it’s hot!

While the song structure remains the same, instrumentally the remix version takes Imri’s deep and sexy vocals on a journey through Middle-Eastern-inspired pop explosions, channeling that Israeli night club realness we were all waiting for.

On his last stop in the promo tour in Madrid, Imri showed wiwibloggs how he owns his social media skills, and transforms them into Instagram or Twitter gold. We also talked about his experience on the promo tour and the new friendships he developed since it started way back at Israel Calling.

While the promo tour is now over, Mr Ziv keeps bringing fresh news every day. He recently revealed the names of his dancers and backing vocalists for Kyiv. Adam Cohen, Almog Kapach, Alon Sharr, Tomer Tenenboym and Ido Geva will turn up and turn out on stage, and help Imri creating a magical party feel.

What do you think about the official remix? Do you prefer it to the original version? Let us know in the comment section below and by using our brand new app available on the App Store and Google play! 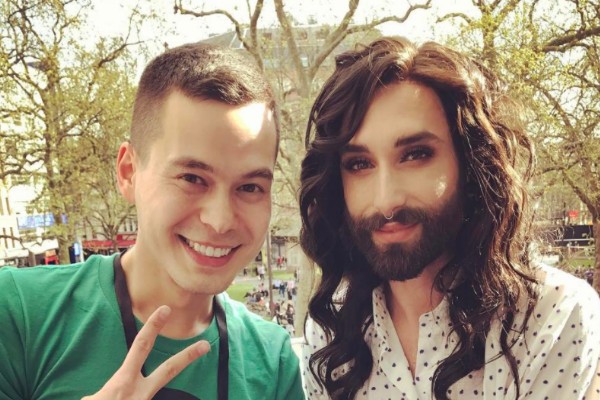 Conchita Wurst: I cry every time I watch Eurovision 2014 Wow, i think this is the best cover ever 😀

What’s up, the whole thing is going well here and ofcourse every one is sharing information, that’s
truly excellent, keep up writing.

Love Israel, love Imri, love this song — but just like the original version, it takes forever for the “fresh” to come to the foreground; people can tune out and miss out. Why do they delay using that exciting crazy Balkan sound from the instrumental part instead of building on it throughout? They never heard of short attention span? Frustrating…

What’s the reason of making a remix? The original song is already ready for the club!

OGAE Malta and Lithuania have cast their votes, and Italy’s lead is growing.

Israel really wants to win! They send great songs from 2010-2017! My fav was 2014 tho still can’t believe it didn’t qualify! It was my winner! Israel is a robbed country with Slovakia,Switzerland,Bulgaria and Portugal I have that feeling that Israel will win in the next few years!

hmm… bad remix of a really good song I think

My favourite this year!!! 12 points from Germany!!! in 2nd semifinal and the final!!!

Thank you germany 🙂 best of luck to you from israel

I totally agree with you!!! Italy song will not win!!!

Why we talkin about Italy here?! This isn’t about Italy. 😀 This is about Israel! We don’t need to downgrade Italy to make Israel better. Italy is good (in my opinion) whether it’s overrated or not. Israel is also fantastic!! But don’t bring Italy into this…let’s just celebrate Israel’s awesomeness! 😉

Ironic since the original songs sounds like a (cheap) remix itself.