September 1 — the un-official start of the Eurovision 2018 national finals season — is right around the corner. As we rev up for the long and bumpy road to Lisbon, and another year of non-stop reaction videos, we thought we’d pause and reflect on our impressions of the most recent Eurovision winner Salvador Sobral.

So we recently took 13 of our videos, beginning with the Festival da Canção artist announcement on January 19, and pulled out highlights of our growing love for the “Amar pelos dois” singer. While some of our commentators — most notably Chris — took a few months to warm up to Salvador, others were sold from the very beginning.

Early on we knew more about Salvador’s sister Luisa than we did about him. But once we heard his song and watched him slay FdC, the hype got real. Bernardo predicted that Portugal would win as early as March 15, and he was publicly accused of being high. He was not.

Our predictions move from “Top 10 finisher” to” dark horse to win” to “favourite to win” as we move from pre-parties (where Salvador was absent) to first rehearsal in Kyiv (when Luisa sang) to second rehearsal (when Salvador finally took the stage). It’s an emotional journey — and you can watch the highlights below.

We could only fit in so much material. After all, it’s a highlights reel. If you want to watch any of the featured videos in their entirety, you can follow the links further down in this post.

In any case, how did your feelings for Salvador evolve as the Eurovision season progressed? Was he your favourite prior to rehearsals? Or did you only feel the magic when he — and Luisa — took the stage in Kyiv? Let us know in the comments box below!

Fast-food music t-shirts: Do you say YES or NO to disposable pop? 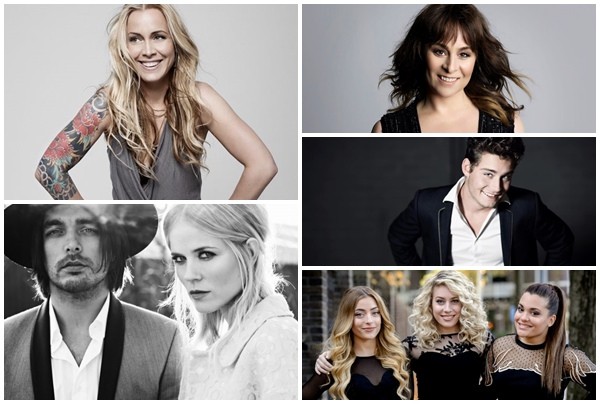 Poll: What is The Netherlands’ best Eurovision entry since its 2013 turnaround?

Thank you so much guys for that memory lane! As much as I loved the song and said many times that it was the best Portuguese entry ever, I must say I was very skeptical until almost the very end. I only started believing in Salvador’s victory when it hit nr 1 in the odds, which happened one or two days before the grand final, but never dared to say it out loud… At the end I literally cried like a baby!

i don´t want to underestimate the song..but i totally loved the fact that finally Portugal won! They totally deserved after so many bad results.
they never give up, they sang in their national language and they got their smashing victory. It was for sure a great moment for every ESC fans 🙂

You missed my favourite bit, when Bernardo bitched that the Wiwijury had paced Portugal only 16th

I loved the song since its FdC reveal, but I had always written it off as, “it would be nice, but it probably won’t (win). Surely Italy is going to steal its thunder!” Fast forward to the rehearsals where he’s present (and in Luisa’s rehearsals), and even in the poor recordings, you could tell there was an atmospheric shift in the arena that everyone was paying attention with the utmost respect. It was only after Portugal had been announced as one of the ten qualifiers when I started to think he could seriously pull off a win, but I didn’t… Read more »

While watching Festival Da Cancao, I was once again disappointed by the songs presented.However, when I saw Salvador’s performance, sth changed. The way he sang, the simplicity, stripped down from anything fancy, just him and the song, attracted me. Maybe I wouldn’t like it if I’ve heard a studio version, but still it was the only possible entry for Ukraine. I’m not gonna lie, I didn’t think he would win, but he would probably do really well. That’s because there were songs I liked more and also because it’s not the usual type of song to win. During the rehearsals,… Read more »

My reaction for Salvador’s victory was exactly the same! I love everything about his song and I’m so happy that he won 😀
I think Eurovision should back to the times, when every song had to be performed in native language. THAT WOULD BE CELEBRATING DIVERSITY!

@Natalia What about songs written and performed in multiple languages?

@Sara Good for me. But native language should be the most important in song.

Portugal and Sweden have a feud, right ? So no Christer Bjorkman, he already accepted to help Switzerland, maybe that means no involvement in Lisbon. Portugal can be very good and change Eurovision, or it can have a host like Toto Cutugno. The hosts are important, and I think Ukraine did a good job, now I wish good luck to Portugal to make the right choice.

“Fight” about what? There is IKEA in Portugal It’s all ok between Sweden and Portugal.

It’s less a fight (see Armenia vs. Azerbaijan for a genuine one rooted in geopolitics) but a fan community meme because whenever Sweden has hosted the contest in this century (2000, 2013, 2016) Portugal withdrew for the year.

I love every minute of this when I wayched it earlier today.

And I love how Chris eventually turned around a corner and gave the song a pass.

And I feel for Bernardo. 😀