It’s time for the Wiwi Jury — our in-house panel of music unprofessionals — to travel to Romania and judge the 15 finalists of Selectia Nationala 2018. We’ll start with the first three qualifiers, who won semi-final 1: Echoes, Eduard Santha and Alexia & Matei. Will we agree with the Romanian jury, who picked them for the National Final? Let’s find out!

Anthony: Echoes delivered when it matters most and their semi-final live performance lived up to the potential of the studio version. So it didn’t come as a surprise to see them being a hit with the rock star juries. The song’s catchy chorus instantly grabs your attention and gives “Mirror” a radio-friendly feel. A promising start for Echoes, but a long road awaits them in the final.

Barnabas: Rock has its own right for existence in Romania and it is good to see it in the nationa selection! However, although the song has a catchy verse, maybe the chorus should be a bit heavier, with more distorted guitars. In any case, the falsetto in the chorus is something that actually stuck in my head.

Jonathan: A respectable rock entry, “Mirror” gets your head moving, but doesn’t quite get you to the head-banging stage. The lead singer’s control of his falsetto throughout the song is commendable. Unfortunately, the small theatre stage of the semi-final didn’t let this entry reach its full potential. Hopefully this will come to life a bit more in the final.

Robyn: I’d be happy if I never had to listen to the chorus of “Mirror” again, with those layers of scratchy falsetto vocals. Yeah, the song could be polished and given more impact, with both staging and production. But at Eurovision, it would be taking exactly the same path as Minus One. There’s room for rock at Eurovision, but can it be better than this, please?

Before calculating the average score, the highest and lowest scores are dropped. This is to remove outliers and reduce potential bias. We have removed a low of 5.5 and a high of 7.

“Me Som Romales” reviews and rankings

Antranig: There is a lot to like about this song and performance. My biggest criticism of the semi-final performance was that the stage felt too small and inhibited what deserves to be a grand performance. As such, “Me Som Romales” deserves its moment on the Eurovision stage where the full extent of its power can shine. Everything about this song screams Romania and it would be a worthy choice for the country.

Bogdan: To quote Ilinca, I am 100% percent behind the message of “Me Som Romales”. The performance is striking thus memorable, and the fact that the dancer has a microphone, thus doubling as a backing onomatopoeic performer, adds a lot of character to the song. Eduard Santha’s track itself may be all over the place, but so are his people — and we should embrace them.

Luis: It’s hard to say why this works, but it actually does. “Me Som Romales” brought an out-there concept in the pool of formulaic pop/pop-rock songs that Selectia Nationala’s first semi was. Eduard Santha and his dancer give an energetic performance that keeps you engaged for the three minutes. Can’t wait to see them perform on a bigger stage!

Sebastian: One part dance-pop, one part reggae and one part crazy, “Me Som Romales” is an eclectic mix of sounds that surprisingly works. The lack of an identifiable hook makes it difficult to sing along to or remember, but luckily the highly energetic Eduard Santha puts on enough of a show so you remember him, rather than the song. With a bit of work on his enunciation, this could place respectably.

“Walking On Water” reviews and rankings

Anthony: Alex Florea and Ilinca connected as a duet showed how to make an instant impact. While it may be early days, Matei hasn’t quite got the hang of it or it could be down to nerves. Despite the setback, the duo delivered the energy on their performance required for a contemporary sounding pop song and Alexia shines as the lead role with such confidence.

Barnabas: A mix of reggae and electropop is always interesting, and this one actually has big potential, however the live performance and their chemistry need to be improved, if they actually want to go to Eurovision.

Jonathan: “Walking On Water” starts off as a nice pop/R&B tune, but the chorus is a let-down and plods along a bit too much. Additionally, Alexia is clearly carrying this whole performance. Her verses are promising, and she’s got some nice swagger. But I have a feeling that Matei is probably an athlete of some kind. He’s very rigid and isn’t quite able to perform the cool, smooth movements that Alexia and the backing dancers are able to. But he’s got a number of weeks to try and improve upon this and strengthen his vocals before the final.

Robyn: “Walking on Water” is one of those unusual songs that feels a lot longer than it really is. That’s probably due to it being so repetitive. That catchy chorus comes around so often that it starts to feel like that’s the only thing in the song. But there’s a lot of potential and Alexia & Matei have fab chemistry. Even without a revamp, this would be a good enough Eurovision entry. But Romania can easily do much better. 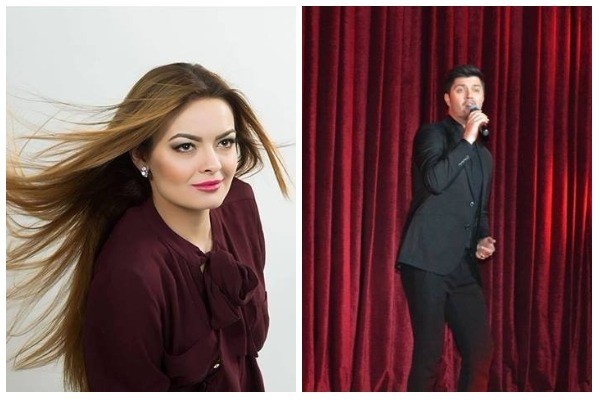 Echoes: I like this song. The beat and the energy they give. 6/10
Eduard Santha: Good song, but I don’t quite like it. 5.5/10
Alexia & Matei: The best among the three. I have to say I didn’t like the studio version a lot, but I liked the live performance more. It would fit a big stage. 6.5/10

The problem with that song is not the roma part… but the horrible jamaican rap or whatever that’s supposed to be. Just horrible. The hungarian song from last year was perfection.

Subjectively I would prefer Mirrors over Walking on Water.

Everything about this song screams Romania so you are saying all romanians are gypsy right??.. this is racism

News flash: if you are offended by being assimilated with the Roma people, then perhaps you’re the racist.

:)) Wow, sensitive subjects. I would feel offended to be assimilated with German people for example, simply for the reason that I have nothing in common with them. I’m not racist for that. But I didn’t get the same conclusion like florin from that expression, I think he got offended for nothing.

Get your facts straight, Bogdan. Romanians have nothing in common with them. It’s not about racism. They have Indian origins, we don’t. It’s as simple as that.
Esti roman… Nu-ti cunosti istoria?