It has been almost two weeks since the end of the Eurovision 2019 security deposit saga. And attention is now fixed firmly on the selection of a host city.

Israeli newspaper Israel Hayom reported that EBU representatives arrived in Israel on Tuesday to discuss arrangements for Eurovision 2019 with broadcaster KAN. During their stay, they will visit the host city candidates as the deadline for the announcement approaches.

As we reported previously, the question of the host city for next year’s competition has not been decided. However, it seems that the race is now between Tel Aviv and Jerusalem, with Eilat a very distant outsider.

According to the EBU rules, the host city must have a venue for at least 10,000 guests, a large press area and enough hotel rooms to accommodate visitors. Jerusalem satisfies all these criteria. On the other hand, its controversial status and ultraorthodox demands to avoid rehearsals during Shabbat may eventually pave the way for Tel Aviv to win.

Some commentators also suggest that Tel Aviv is more suitable for Eurovision because it has a more tolerant view of the contest as Israel’s gay capital. Furthermore, Tel Aviv mayor Ron Huldai has offered to help with the funding of the event and to build Eurovision Village by the seashore at Charles Clore Park.

Curiously, the EBU delegation to the holy land follows a meeting that took place last week between KAN and some Swedish producers who were involved in the production of the contest in 2016. Israel Hayom said that they will be advising KAN on its preparations. Let’s hope that KAN will implement SVT’s high standards as they are definitely pros when it comes to hosting Eurovision.

Israel Hayom also mentioned the delegation visit in its gossip section. The column featured Corinne Gideon, an Israeli TV host and one of Keshet / Israel channel 12‘s youngest talents. This may suggest that Gideon is among the candidates to host Eurovision, alongside Erez Tal and Assi Azar. Gideon, 26,  replaced Assi as co-host of the Israeli version of Big Brother after he left to host The Next Star. She had been rumoured previously as a potential host but this was not confirmed.

The gossip section of Israel Hayom recently named Corinne Gideon as a potential #Eurovision host. The 26-year-old is known as a co-host of Big Brother. Israelis, what do you think? ?? #eurovisionsongcontest #eurovision2019 10 reasons why we love Albania at the Eurovision Song Contest

10 reasons why we love Moldova at the Eurovision Song Contest

I want Dana International as hostess!!!

Can’t wait to go there this may wooohooo!

In which way does tel aviv not match the criteria?

In a way it doesn’t make the “national boner” hard and shiny. Israelis pretty pathetically need a constant confirmation that Jerusalem is their capital (like it’s not a matter of fact anyway). They think they can push Jerusalem into everyones throat until everyone agrees with whatever agenda they are promoting. Good thing that the EBU are the ones who decide.

no.. it’s not dangerous.. when you are far you think it is…
i feel that it’s dangerous to come to Paris… but, i know it is isn’t so in reality…

https://www.haaretz.co.il/gallery/music/eurovision2018/.premium-1.6082942
You blow my mind. In 1999 there were no rehearsals on Saturday or Friday due to a last minute protest by the Orthodox community (info in the link). And you still keep saying that Jerusalem is “just fine”. I sense that you will be VERY disappointed next week.

Report: City to be announced next week.

And Eilat, as we suspected, is out.

Yeeeeeeeeah… cause the media is obviously always telling the truth.
I was in Jerusalem this summer on my own, beautiful city, very cultural and I’m Iranian as well, Israel’s no. 1 enemy. Very dangerous indeed. -_-

There is a huge difference between one (or a few more, idk) individuals visiting Jerusalum and 40+ delegations with thousands of fans though.

This may sound controversial but I really want an ESC that is soley done by the country that won. Portugal had a lot of Swedes helping the stage was designed by a German. I just would like a purely Israeli stage and show. Thats just me, in the end as long as it goes well.

Ola Melzig was the Technical Director this year in Portugal, and last year in Kiev. He was TD in Stockholm in 2016, and in Malmö in 2013. Not to mention Oslo in 2010. In Moscow in 2009 he was production manager. It would be madness not to have him in Israel. Just like everyone he’ll want to work with people he knows and trusts.
I can’t remember the last time the show was produced completely in house by the host broadcaster. It wasn’t Sweden in 2016 if that’s what you’re thinking!

Düsseldorf 2011 wasn’t 100% in-house, but it was about the most in-house we’ve seen in years. Germany has a huge television and events production industry to draw upon, with loads of experienced experts. The same team produced the show in 2012 as the Azeri broadcaster didn’t have the experience.

Vienna 2015 was completely produced in house.

There’s an example of a county with a strong television industry and the resources to do it in-house, but they still could have used some external expert advice. Specifically, they should have had someone firmly say NO to the canned applause, which at times made Eurovision 2015 feel like the Belarus national final.

Not true. Lots of German and Swedish production assistance.

That would be possible if every country had highly experienced and skilled experts in those fields. But that’s not the case. Some of the guys who are Eurovision regulars are one of only a dozen people in the world who could do that job. When guys like Ola Melzig and Henric von Zweigbergk show up every year, producers can relax because they know the job is going to get done with no drama. And local production staff – who are always involved with the show, anyway – can learn from some of the best people in the world and use… Read more »

It’s especially helpful for Kan, as they’ve only been active for a year now and could definitely use the outside help.

And this is even one of the aims of the EBU – sharing skills, technology and resources!

It won’t happen in Israel. There are no such huge television events taking place in the country, and therefore no suitable experts to handle solely such project. Besides, there is something with Israelis building stages that often goes wrong. In Israel Calling last year the lights didn’t work for 15 minutes. Some years ago there was a power outage during the Independence day live broadcast. And a couple of years ago a soldier died in the same event during rehearsals because a lighting fixture collapsed on her. I strongly hope that no Israeli will touch that 2019 stage but only… Read more »

Why? learning from past mistakes and recycling something that works is better than re-inventing the wheel.

The three of them would be great as hosts.

Also, for some reason I can’t comment on the Albania piece, so let me say: did I call it or did I call it? Great, underrated country. I still think Suus is a masterpiece.

Apart from Tel Aviv, Haifa was probably the only sensible choice but that’s eliminated. So Tel Aviv will be probably be the host city.

I hope we wont have to cope with Bjorkman as a contest producer another year. Do your mello and stop messing up the contest.

Christer doesn’t like Israel… when he was a eurovision comentator he said live something nasty about us…. it was mentioned in our media

There is no reason to be afraid in Jerusalem,
The city is completely safe

Remember what I told you, in two weeks it will be official Jerusalem 2019 I guarantee! 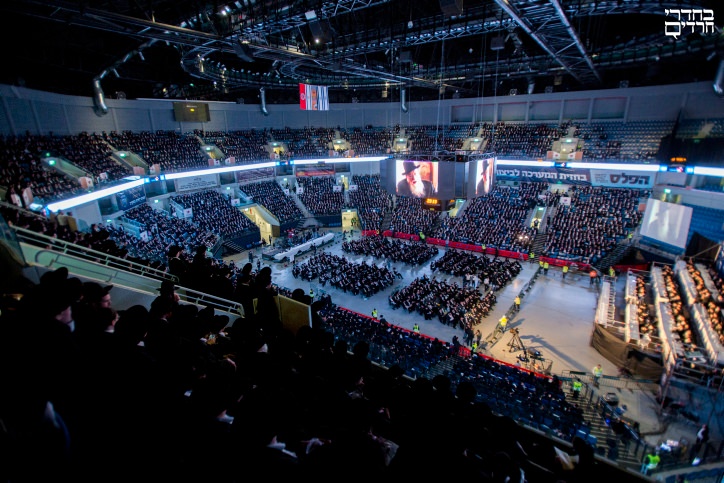 Nothing is decided yet

Don’t you see the irony? You post a pic of the vennue filled with orthodox men. This picture shows the face of modern Jerusalem, it is much more orthodox today than in 1999.

A ten-thousand seater is a long way from the tiny conference hall used the last time Jerusalem hosted.

Why do they insist on such a huge venue? No way 10,000 fans travel to the host city, so I guess it just purely to make the show look enormous on TV. A lot of cities would have trouble fulfilling this criteria.

I honestly think they can start revealing other ESC stuff, like the logo, the motto, etc.
I can’t see why they are so confidential about everything..

I’m also interested to know who does KAN think should be in the opening/midway/closing performances. really hope Harel, Shiri and Nadav are considered. can’t see any Israeli Eurovision without them (Netta will be there, so I’m not worried about her)

P.S. the logo should totally be a drawing of Netta waving that trophy while hitting that high note and confetti falls on her . that was colossal.

It’s way too early for the release of logo, motto etc. This usually happens in december at it’s earliest.

If they decided that ESC is in Israel I don’t see the problem. the motto doesn’t reflect the host city nor unveiling their candidates for hosting/interval acts.

The concept and logo are usually revealed about 5 months before the contest, and there’s no reason to hurry and do a half-assed job when they can take their time to come up with decent concept and logo. It’s a process that need not be rushed. All in good time.

Yes, lets give Sweden and Christer Björkman even more power!