She is here to make a statement! Amaia Romero, winner of OT 2017 and part of Spain’s duo at Eurovision 2018, has released her first single “Un Nuevo Lugar” (A New Place). And guess what: she shines bright, like a diamond.

Yes, the wait is over. Almost a year from her victory in Operacíon Triunfo, the new Queen of Spain is starting her solo career with a celestial anthem and we are here for it.

She doesn’t need to shout for her talent to resonate with an audience. Amaia captures, grips and casts a spell with this sweet and thoroughly arresting ballad. Bonfire with friends, church, yoga class or simply at home — this song will leave you enchanted and wanting more no matter what the scene. Amen, namaste, girl you slay!

Amaia is progressing her career on her own terms. She’s got the titles and knows she is loved, so can take the time to create and release as she sees fit. in this instance the song is warm and inviting. There are no gimmicks, no fireworks. And it’s also less than two minutes, but carries the motion of an entire life. Perfection!

This is the first tease of what is expected to be a killer debut album from Amaia. In recent interviews, she confirmed that the album is still in the works so we still have to wait to see what’s in store for OT’s reigning queen.

Romero is expected to premiere “Un Nuevo Lugar” at the final of OT 2018 this Wednesday. There’s certainly an appetite for it. Within minutes of going live, the song managed to climb to the top of iTunes Spain!

Earlier today, she was confirmed as one of the acts present in the Christmas Gala RTVE is preparing with acts from both OT 2017 and 2018. We can’t wait. Give it to us now!

What has Amaia been up to after Eurovision?

Amaia has taken a slower pace this latter half of the year, but not that much slower than her co-stars. She has featured on multiple singles, including the remake of one of her Eurovision bids, “Al Cantar”, with fellow Spanish star and author Rozalen, and also featured on one of the singles of indie band Carolina Durante.

What do you think of Amaia’s first single? Did it meet your expectations? Tell us in the comment section below. 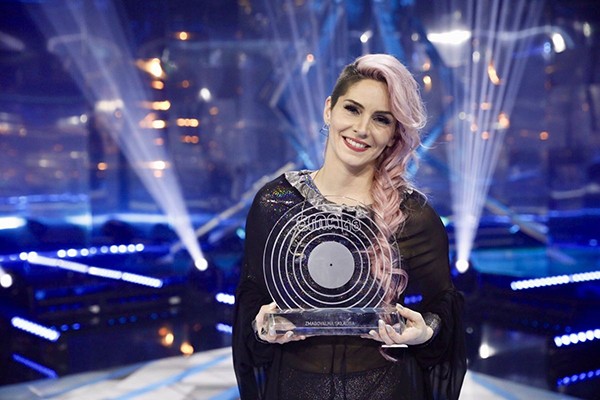 She looks gorgeous. Love the song, even though it’s a bit short.

Poor soul. Finishing 23th must have make her crazy or something…

is she still together with Alfred?

what the hell was that? and then people wonder why she was bottom 6 with alfred. BORING

It’s a very unusual debut single and I mean this as a compliment. I’m glad they aren’t trying to change her. Very curious to listen to the whole album.

I just have to say thank you to Amaia and be grateful for being able to witness her talent.

It’s sincere, sweet and in exact amount, just like a pinch of sugar in the tea that gives it a good taste.

Is great, it reminds me of Salma Hayek – Quedate Aqui. Similar genre that sounds so good in Spanish.

It’d be cool if Amaia performed “Un nuevo legar” as the interval act for the Eurovision Gala in January. 🙂

She has been confirmed as appearing on tomorrow’s final an hour ago, so it’s probably happening.