And fresh from that triumph, RTVE has signed Nicoline Refsing to direct Blas Cantó’s performance at Eurovision proper.

Eurofans will be familiar with Refsing from her work as creative director and content produdcer for Eurovision 2014 in Copenhagen.

“I love Blas and ‘Universo”, and I’m excited to create a spectacular staging for the May show.”

Refsing also disclosed that Blas will be joined on stage by five backing singers.

Her vision for the staging has been defined by three adjectives, “exciting, ambitious, explosive,” all of which aim to enhance the live vocal.

Refsing won plaudits for her staging of Spain’s entry at Junior Eurovision 2019.

But she also has a decorated career in the UK, with credits that include the BRIT Awards, X-Factor and National Television Awards.

Refsing is also full of praise for the Spanish delegation:

“”I am excited to be part of the Spanish delegation again, it is one of the best teams I have worked with.

“Ana María Borda (Head of Delegation) is a great leader and knows how to surround herself with the best professionals for her team: focused and passionate about the work they perform, creative, fun and affectionate.”

Refsing has past staging credits that include Dami Im’s “Sound of Silence” and Francesca Michielin’s “No Degree Of Separation”.

Blas Cantó has performed his #Eurovision entry live for the first time. He took to the stage of the talent show Operación Triunfo and proved what a voice he’s got. While Operación Triunfo wasn’t used as the Spanish Eurovision selection this year, there was still room for the internally selected act for Rotterdam. For Blas’ first live performance of “Universo”, he began singing over a starry background. Dressed in a black suit with a sequinned snake on his shoulder, Blas kept total control of his voice and unleashed his power during the high note. #esc2020 @blascanto_es #blascanto

Spain’s entry “Universo” was announced in January and Blas has already confirmed several stops on the pre-party circuit.

As well as appearing in Madrid, Blas has also confirmed appearances at Amsterdam’s Eurovision in Concert and the London Eurovision Party.

What do you make of the staging news? Let us know in the comments below! 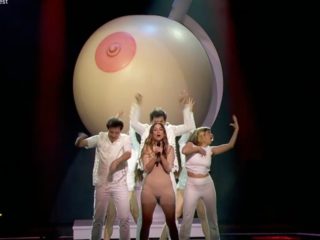 I believe she will do a very good job and Spain will do better than expected.

All this disproportionate hatred about France is…….
Would you be happy to read such things about your country everywhere ? And some people insists and insists again…..
It’s so “in” to hate France among the eurofans, it’s their new game, they are happy, cause each years the eurofans full of hate NEED to find a country or somebody to hate……it’s childish, unhealthy and so useless.

EUROVISIONARY
Reply to  Eurovision, is it love or hatred?

I totally agree, some years it is up to France, others to Spain, but almost always one of these countries suffers the attack of Eurofans towards their representatives. It is painful and sincerely very unfair.

Eurovision, is it love or hatred?
Reply to  EUROVISIONARY

Possible to let France in peace, yeah we have understood most of people don’t like it but is it a reason for this fury, I don’t think.
So Una the belgian girl take care of your hooverponic and let the others in peace, France with this belgian girl doesn’t need enemies.
It’s so sad to see people with such a bad mentality

The aim of this fury?

Eurovisionary
Reply to  Eurovision, is it love or hatred?

Better ignore people who hurt intentionally and unfairly. I love the French song, possibly the jury too.

I hope it will be more Dami Im than Francesca. I like what he did last year with “Marte” . On paper everything she said sounds good. The last time we send an actual impressive staging was in 2014. Glad she staged that performance. It was also a case where the staging needed to elevate a rather “average” song, same as now. Fingers crossed!

I have to say I’m very happy with Ana Bordas as the HoD too.

off topic but any news from Azerbaijan? Do they even care to announce their entry?

Yeah, we haven’t heard anything from Azerbaijan. Or Russia, Ireland , or San Marino. The deadline will be coming up pretty soon.

Wait, never mind, I should have realized you meant Ireland. Anyway, why can’t these mystery countries at least announce the date when they will reveal all?

Some countries don’t say anything, others tease their entries even with capital letters of the name of singers…

According to Wikipedia, Russia will announce their singer by the end of February, but I dunno about the other 3.

I don’t know if Francesca Michielin’s “No Degree Of Separation” is a good example. It is Italy’s second worst result since their return, and the song was good but the staging was not!

Still waltzed away with two top scores from the jury vote. Heck, Norway liked it so much they forgot to vote for Sweden!

What a good choice by Spain, at least I think they’ll have a good staging this year. Nicoline’s consistently brilliant with her stagings, and I don’t see the comparisons to Sacha Jean-Baptiste as the difference here is that she doesn’t do multiple stagings every year, it seems to be a maximum of two, and her stagings are well-thought-out and well-executed without being blatantly biased towards one of her entries and leaving the other one completely in the dust. I mean, Sacha basically did We Got Love 2.0 for Hanna after the hot mess with Jessica that resulted in a poor… Read more »

Now I think I might be sometimes too harsh on Sacha (and salty) seeing that “Bones” and “We Got Love” were my favorites that year, and then seeing the rise of “Fuego” and my favorites chances decreased after the stagings were done by the same stage director was annoying. I think she had the resources available? I mean, Bulgaria clearly had the money and wanted to build on the successes of Poli and Kristian, I don’t doubt for a second that they didn’t have the money. Australia could afford the stagings of Guy, Dami, and Isaiah so I don’t see… Read more »

Hanna’s staging was done by Zain Odelstål and Dennis Bröchner. Sacha is the in-house stage director for Melodifestivalen this year, but had less influence on Hanna’s number.

Sacha’s finest hour was 2016. Armenia, Lithuania, Georgia, and Cyprus, all of which looked amazing.

Took me a second it was her last name and I was wondering why she was “Refusing” to stage the show.

I mean it’s about time that Spain get something right in their staging, Miki’s last year staging was not it despite big name around it. And she’s also directing Ireland’s balloon boy and Switzerland’s disney universe of 2017, which is a hot mess. Just like SJB, staging director can be quite hit and miss

I hope they can do something. Buzz is pretty much dead here in Spain. Blas is doing promotion but people are not connecting

It might be an interesting choice, but we should remember something about Italy’s 2016: we picked Nicoline Lindeborg Refsing – Conchita Wurst’s stage designer – and it was not a beautiful mess. Name dosen’t mean nothing and on top of that it can only elevate a bit the song, but not tranform it in a winning song!

Thats our problem. I wanna think there are people in Spain with enough talent to make good stagings.
Like Portugal, Ukraine or Israel went 100% local on their wins I think. You could do well without these well known ESC directors

Good point. What an awful decision by him to make poor Miki jump about at the same time as those long notes.

Very good choice! This year I am really pleased with Spain so far. Looking forward to the staging 🙂

Someone who has actually staged a recent song well? Great idea as far as I’m concerned!

Good news always wellcome except for the haters of course.Spain is doing very well this year and I hope go to be apreciate, I enjoy much to listen the song and I see everytime more people like spanish entry, also Lithuania Italy and Belgium have much quality.

Nothing in this world can save this bland song. See ya at 26th place with France

Spain and France are both going to come 26th?!

Finger crossed both rightfully getting 0 points

Eurovision, is it love or hatred?
Reply to  Fatima

An air of inevatibility! LOOOOL! Seriously? Are you a soothsayer?

Eurovision, is it love or hatred?
Reply to  Rasmus

And France France and again France,…..it’s becoming sickly….. what do you want all? France’s withdrawal? Keep acting like that you’re so right! Only your own countries are the best of course and never go wrong!

Eurovisionary
Reply to  Eurovision, is it love or hatred?

Don’t worry, don’t worry that he isn’t even able to say what country he is from. France and Spain are two of the countries with the best trajectories and professionalism in the history of the Eurovision Festival. Don’t pay attention to people who just want to hurt, hate always ends up turning against the one who practices it. I love the song of France and its representative. By the way I am Spanish and I say it with great pride. I think France is going to be in a very good position this year, I’m sure.

Interesting I think it’s a good thing jesc 2019 spain that staging really suited the song. But I don’t know about 5 backing singers we see

Nothing can save this song.

Interesting development! Nicoline Refsing has a really good track and I hope she manages to stage “Universo” brilliantly which can not only get Spain out of the bottom 5 but also score better than most Eurofans are expecting, it’s already an underrated song and easily the best Spanish entry since 2014.

2014 was probably the last time Spain had good staging

So did I!!! Hahahaha

Staging is usually Spain’s weakest point in Eurovision, so it’s nice to know that that department is in good hands for once.