Following her early exit at Eurovision 2012, Nina Badric has finally found some sunshine. The Croatian songstress recently posted photos of herself sunning on the beach. “The first swimming this year in the sea,” she wrote on the site. “White bikini, great rays.” And while @ninabadric7 did capture a lovely photo of the sea, we’re less convinced by the two photos she took of herself. The angle on the headshot does her no justice. And as for the other body shot….we’re not sure if that’s a knee or a shoulder or something else. What’s clear is that she fastened her outfit from the massive wad of toilet paper she unfurled during the second semi-final at Eurovision.

Posting photos of herself on the beach may be a sign that Nina has got her swagger back. It may also indicate that she is making up for lost time. Ahead of Eurovision it emerged that Nina was giving up sex so that she could focus on her act.

You can check out the photos below. Norway: Why Did Tooji Flop at Eurovision 2012? 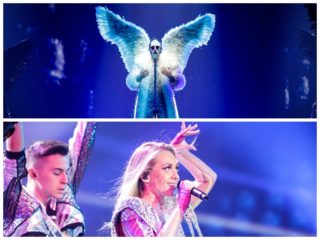