Wiwi’s readers clearly want to check into YOHIO’s “Heartbreak Hotel”. The 17-year-old glam rocker easily won our poll to determine who will win Melodifestivalen on Saturday, claiming 20% of all votes. That put him well ahead of second-place finisher Ralf Gyllenhammer, who claimed 13%. In recent days Swedish media have suggested there is an SVT conspiracy to ensure that the androgynous singer wins. An SVT film crew, which is currently making a documentary about him, have been tailing him at the Friends Arena all week. They also claim that YOHIO was assigned to the easiest semi-final to ensure that he would make the final. And, to top it all off, YOHIO will perform last on the night of the final. Hmmm…

Elsewhere in our poll, second chance qualifier Robin Stjernberg has ridden a wave of momentum and come third. Ravaillacz has predictably finished last. And Anton Ewald has only managed to come fifth. We don’t have a lot of 14-year-old female readers apparently.

Anyway, you can see the complete results below. Click on the singer’s name to read what the Wiwi Jury had to say about the artist’s entry and to hear the song one more time. And click here to see the final Wiwi Jury rankings and predictions. 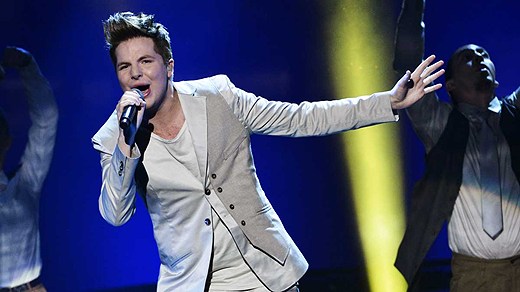 Unfortunately, I don’t think juries at the Eurovision Song Contest will like “Heartbreak Hotel” very much, providing that YOHIO wins Melodifestivalen 2013. They tend to hate rock based entries though.

i don’t mind him at all… but then again, i’m asian… not sure how people outside europe gonna take this…