Ukrainian National Selection for Eurovision is in its peak. The final will take place on February 21 and meanwhile the Wiwi Jury — our in-house panel of music unprofessionals — has been listening to and reviewing all of the songs that qualified from the semi-finals. This time we are discussing Brunettes Shoot Blondes with their song “Every Monday”. They are young and they are ready to battle. But did they choose the right weapon? Read what we think about it!

Mikhail: It’s nice to listen to, but it does nothing for me. Typical indie-pop boyband. They lack any energy and, therefore, it sounds flat. I already don’t remember how the song went and what was it about, while writing it. That’s not a good sign, right?

William: These guys have the look and the talent, but this song is completely underwhelming. I appreciate the nostalgic, wistful feel, but those feelings typically come with more extreme emotions on the side. Where is the dizzying high, the suicidal low, the ecstasy and the defeat? Without emotional context this is just a guy whining about the one who got away. We’ve heard it all before — and served in much more interesting ways.

Deban: Slightly Brit-pop in tone, but very understated in delivery. I like “Every Monday” – it reminds me of weather music. It’s easy, breezy and inoffensive. Equally, because it possesses these qualities, it fails to make a major impact.

Robyn: If these guys made it to Stockholm, they’d be facing some pretty stiff competition from other rock bands who are hairier (Minus One) and scarier (Young Georgian Lolitaz) then these nice lads. “Every Monday” is a good enough song, but the singer’s super chill vocals feel like they’re holding the song back. The rabbit-lady backing singers have more life!

Luis: Is there any better band name? I’m loving it. Unfortunately I’m not loving the song so much. Don’t get me wrong, I love their style and this kind of music, but it’s a tad monotonous for Eurovision. Plus, they have Jamala and The Hardkiss on the national final, so any competition will be between those two. Ukraine’s national final begins to look like Spain’s National Football League: there are no contenders. And yes, I never expected to make such a comparison in this blog.

Antranig: After a high quality semi-final, the judges decided to rank the worst song second and gave it a place in the final over the amazing Aida Nikolaychuk and Anastasia Prikhodko. This is likely to appeal to some people but I couldn’t get through the three minutes without falling asleep. They can have one point for an awesome band name.

Zakaria: I still don’t get how this song made it through. It has a very cool and chilly sound but nothing happens during the three minutes. I have a feeling the singer wants to give his voice a mysterious tone but it seems like he’s bored singing the song. It would be extremely wrong if Ukraine chooses this. 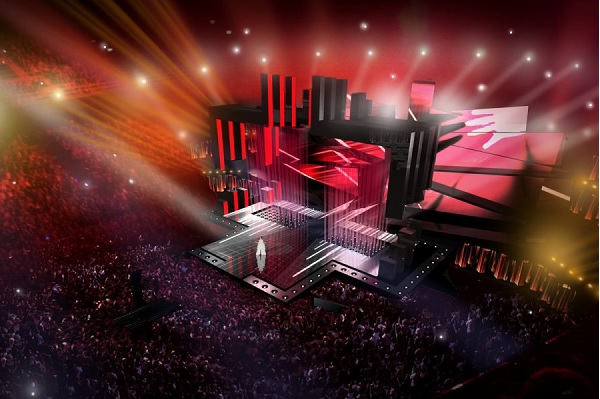 Poll: Who should advance to Romania’s Selectia Nationala final?

Agree with Zakaria. “Nothing happens during the three minutes.”

Let’s be honest, half the songs in the final are filler and it’s good to have a bit of diversity in that filler.