On Tuesday Portugal’s RTP firmly pulled Eurofans into the Eurovision 2018 orbit with the official announcement that Lisbon will host the contest next May.

Bernardo — our Portugal correspondent — grabbed a front-row seat for all of the action. If you missed his Facebook Live coverage, you can watch it here.

Since then, many of you have written to us asking whether the homage to water seen in various signage hints at the official slogan and theme for Eurovision 2018. Still others have asked about the location of MEO Arena and whether there’s anything to do in the surrounding area.

So today Bernardo — who is on his way to Zhara Fest in Baku — stopped by William’s house in London for a quick catch-up in front of the camera.

Among other things, they talk about how far ahead of schedule RTP seems to be.

Ukrainian officials did so on September 9. Portugal’s team managed to announce on July 25 — about six weeks earlier.

The city council has secured access to the stunning Praça do Comércio — also known as Commerce Square — for ten days in May.

The large, rectangular square is shaped like a U and opens out onto the Tagus River — the lifeblood of the city.

Once home to a royal palace, which sadly burned to the ground, it was remodelled in the late 1700s. It has witnessed its share of history — including the assassination of Carlos I, one of Portugal’s last kings.

It’s exact use during Eurovision has not been confirmed. But if we had to guess we’d say it will host either the Eurovision 2018 red carpet ahead of the Opening Ceremony or Eurovision Village.

The Praça do Comércio was yesterday revealed as an important part of #eurovision 2018. The area will welcome major events during the two weeks. Maybe Eurovision Village and the Red Carpet event? We're beyond excited to find out! #eurovisionsongcontest #lisbon #lisbon2018 #visitlisbon #lisbontourism #eurovision2018 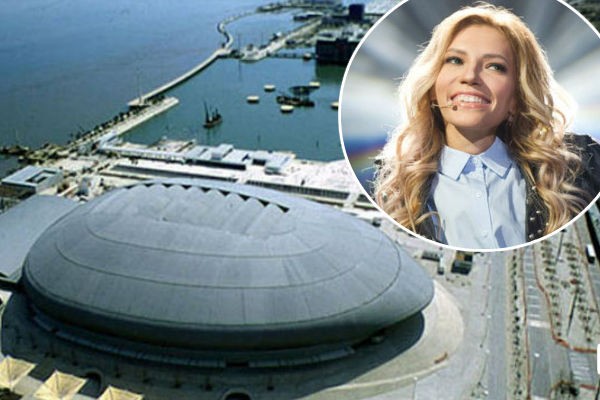 Russia: Julia Samoylova still waiting to be confirmed for Eurovision 2018 Eurovision 2018: Is RTP actually considering Nelly Furtado as a host?

Best interval act will be Dulce Pontes and Andrea Bocelli with a recreation of the songs O Mare e tu.

I have ideal :”Sail Into Infinity”asesc2018 Slogan and the stage design warter around the stage like 2014.

We need a slogan about much – which is what ESC is about! Not the usual cheesy repetitions of the same theme

Yes! Azulejos would be cool!

I googled this and this reminds me of kalesdospic concept of Helsinki 2007. I prefer modern logo this time.

The logo must have something to do with the ocean, even if it’s dated, of course ocean theme was used before.
– a shell with a pearl that can have flags colors
– 3 seahorses because usually flags have 3 colors
– shark and dolphin together

Going on Twisted French’s point, while I appreciate that Portugal was once an empire of significance, I hope they don’t use it colonialist imagery in the marketing, as a person of colour.

Guys will there be a poll on Belarus’s JESC national final?

i really like their blue aquarelle Watercolor painting backgroud its fresh lighs something new ideal .lts looks like clean sky with white clouds and water . I wish they keep the them of background next year no need to change this amazing background. Waiting for the logo and slogan.

In chinese Portugal was named ” grape tooth ” because grape in chinese world pronunciation “pu tao” and” tooth “means IVORY because portuguese and spanish send a lot of expensive thing like ivory to Asia for trading many hundred years ago.
So spain be called “west class tooth” in chinese word. So maybe they can use Grape as Logo. Lol

After I Consult the chinese dictionary ,”tooth” the word also meaning “Broker or Middleman of Business” since thourhan years ago.Thank you

I would like see a Jellyfish as icon mixed with sea waves. Also the jellyfish has a similar shape with Meo Arena. In 2013 the logo was a butterfly, why not a jellyfish? A kind of sea fireflies.

I hope the Graphic Designers make a good and smart choices.

shh jellyfish is timeless
it only depends the graphism dude, colour, style, expression etc. if you use the right choices It can looks contemporary.

That shape reminds me Alien’s head.
Maybe the design will be a fish, like tuna or cod ^^.

Rosa Mota arena in Oporto is their spaceship ?
Are you being ironic? but there is an oceane creature named “Portuguese man o’ war” but it looks a like the placenta

Did Bernardo just say that the logo and slogan will be related to the sea and fit the Portuguese tradition? That sounds great! Hope for an intersting logo and an insiring slogan.

William, I don’t know if Ronaldo appears in Eurovision, but it’s sth almost everyone wonders. Who knows? Maybe like Sweden, as you said, when Zlatan welcomed everyone to Malmo in 2013. It’ll be so awesome!

So happy Portugal is already working on everything! I believe Lisbon will be a great host!

A “rectangular square [that] is shaped like a U”?

It’s like Portugal tried to square the circle but gave up halfway through.

William, I love you, but you can’t use the word colonial greatness… Colonial is a style now but there’s nothing to be proud of. Colonialism, by definition, means to eradicate the locals’ history and culture, and make them yours. Colonialism is the summum of domination and extermination…. And im French, so I know what colonialism is…. There can’t be colonialism greatness, that’s antinomic. I understand what you meant though!!

You are very much mistaken the Portuguese Colonialism have nothing to do like French, Belgian, English or Dutch.
Even with the Spanish that destroyed civilizations like the Aztecs.

Still, colonization was a bad practice in every way.
Thrre’s no good colonialism.

both of you are quite confuse…Guys you don+t even know the difference between colonization and colonialism. They are not the same think. Also you cannot look to 16th century with your 21st century eyes…thats nonsense…