Olá Portugal! Over the past couple of weeks, speculation and intrigue has been building about who will host Eurovision 2018. And if Impala News has it right, then the wait is finally over.

Although the official announcement is set for Monday, Impala News is already citing what it describes as a trusted source who says that NCIS: Los Angeles star Daniela Ruah will host Eurovision 2018 with RTP presenters Catarina Furtado, Sílvia Alberto and Filomena Cautela.

Impala says its sources confirmed that the four beauties were part of an official photoshoot last week and are set to be announced at RTP headquarters on Monday. There is no confirmation yet if all four will host the three shows or if we will have something similar to Eurovision 2009, where two presenters hosted the semi-finals and a different pair hosted the Grand Final.

RTP officials did not respond to Impala‘s queries on the matter.

Three of the announced hosts were rumored by wiwibloggs after Portugal’s victory at Eurovision 2017, but who are the chosen ones?

The 34-year-old beauty is a Hollywood actress and currently stars in the CBS hit series “NCIS: Los Angeles”. The talented thespian was born in Boston, but her family moved to Portugal when she was only 5.

She started her career in Portuguese telenovelas before flying to London where she got her Bachelor of Arts. In 2006 she won the Portuguese version of Dancing with the Stars, showing she is not just a pretty face. She’s got legs — and she knows how to werk ’em!

Daniela went on to live in New York to hone her craft and booked a leading actress position in “NCIS: LA”. The series is currently in its 9th season.

A 44-year-old TV presenter and actress, Catarina Furtado has media in her blood: She’s the daughter of noted RTP journalist Joaquim Furtado, who famously reported on the Carnation Revolution military coup in 1974. But Catarina is definitely standing on her own two feet, having worked with RTP for the past 14 years.

She has immense experience hosting televised talent shows, including the two most recent editions of The Voice of Portugal — the network’s highest-rated show. Perhaps most germane to this discussion, she also hosted the 2017 edition of Festival da Canção, which resulted in Salvador singing for Portugal at Eurovision. Kind, experienced and, let’s face it, stunningly beautiful, she would be in her comfort zone while leading the show either alone or accompanied.

The 36-year-old stunner trained at the Escola Superior de Teatro e Cinema, so she’s comfortable on the stage and knows how to deal with drama. Just like Catarina, she served as a host at Festival da Canção. In fact, she’s led the show eight times — through good times and bad, through the amazing Suzy…and Homens da Luta.

A former Disney Club presenter, she hit the big time when she presented Ídolos — the Portuguese version of Idol — in 2003 and 2004, alongside actor Pedro Granger (more on him below). Since then she’s hosted other talent shows including Operação Triunfo(2007 and 2011) and most recently, Got Talent Portugal. From circus performers to dance troupes to singers, Catarina has dealt with them all.

When it comes to the green room — where a host needs to draw out the personality of the acts — the obvious choice is Filomena Cautela.

Funny, charismatic and welcoming, Filomena was Portugal’s spokesperson in this year’s Eurovision final (watch her from 23:52 here). She currently helps laugh Portuguese to sleep with her comedy chat show “5 Para A Meia Noite” (Five to Midnight).

She’s no stranger to the world of Eurovision either. As with the earlier ladies, she played a role at Festival da Canção 2017, hosting this year’s green room. In Portugal, everyone knows her and almost everyone loves her.

After having three male hosts celebrating diversity in Kyiv, RTP is going for a full on female crew to take on the world’s biggest music competition. We’re excited!

What do you think of the four ladies? Are you excited to see them hosting Eurovision in May? Tell us in the comment section below! 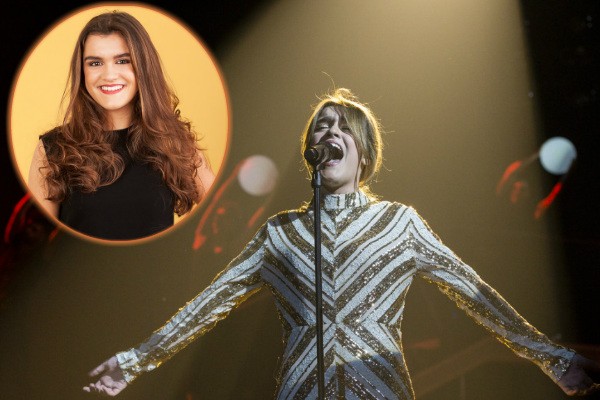 Operación Triunfo: Amaia, 19, cements her status as OT favourite with stirring “Shake It Out” cover

Oh, and I have a funny feeling one of the hosts is either Suzy or Rui Andrade…

You give them more importance than they really have in Portugal.

Does anyone what time the press conference is?

Ehm, I think Conchita is a man 😉

four? That’s excessive!
Hope they are better than the robots that hosted in Vienna! That was horrible..

They will not be robots, all contrary, they will not stop talking. If Toto Cutugno would be there, he wouldn’t have the chance to say any word.

What if it’s 2 for ESC and the other 2 for FDC? It would make a lot of sense.

If you go to her instagram you can see she celebrated the new year in Cascais, so she was in Portugal at the time Impala claimed the photoshoot took place. RTP said “the 2 hosts” will be announced on moday but maybe they only meant the Semi-Final or something, idk we’ll just have to wait until monday to find out.

First, I love the idea of having only women!
However, 4 is too much. Either they’ll have 2 in the semis and the other 2 in the final or all of them (3 hosting the shows) and Filomena in the green room.

This news from Impala can only be false, because on Wednesday, RTP, through the report in “Telejornal”, said and I quote: “The two presenters will be known next Monday.”: https://www.facebook.com/escportugal/videos/10159841577665720/

For this news to be true, RTP had to say only “Presenters”, not defining how many would be. It’s these little details that make the difference.

Can’t we have Petra and mans every year?

Absolutely not, thank you very much!

no please, no petra and mans
enough already

too much? No. One for the red carpet, other for the green room, and 2 for the show.

Because this year’s show doesn’t have the tagline ‘Celebrate Diversity’. If you’re going to choose that as the phrase to represent your show, then choose three white men to host it…

well… there isn’t any black host in Ukraine, it’s not like we’re in USA. And diversity is really not abou genders for me, but about culture, languages, music… Who cares if someone is a man or a woman, it’s about his character and humor(as a host).

I agree w you!

That’s like saying it is prejudiced to give food to the poor without giving any to the rich.

lol how? Janro is only saying that it’s weird that people were complaining about sexism when it was 3 men hosting, but now that it may be 4 women nobody gives a damn.

Can everyone just calm down, take a chill pill and wait until RTP provide all of the information next Monday? Why people are ready to criticize when we don’t have all the details? Plus, how do you know that having 4 female hostesses won’t work? If you’re comparing with Austria, then you are comparing apples with oranges. I’m very excited about this and it might just work. I saw most of them in Festival da Cancao and they were great.

We’re not having all four at the same time, for sure. Filomena will most certainly be in the Green Room.

Of course not. There are semi finals, final and green room to host. Filomena would be sublime for the green room. Seriously, as much as I love Eurovision, the fans need to dial back quite a bit. Some just love to create a hurricane in a glass of water. It’s not their Eurovision to host or organize, it’s Portugal’s Eurovision. So far, RTP and Portugal have been very impressive.

There were days when a host was considered qualified if he/she knew how to count to twelve in French. And some of them even struggled with that.

There were days when a host was considered qualified if he/she was knew how to count to twelve in French. And some of them even struggled with that.

I wish I could delete my comment below. Regret is a powerful emotion.
Sorry everyone. I have failed you.

Buck up, Purple, don’t be so hard on yourself. Nobody is going to fall out with your over one misguided comment – you need thick skin if you want to hang around internet message boards! 🙂

Thanks Jonas. I’m gonna be quiet for a while on here though. This is more than just a “message board” to William, and it’s him I need to apologise to. All the best x

I’m so happy we’re having Daniela Ruah! Perfect English (and she can dance and sing). If it’s true, well, well-done RTP!

Why did Vova say that Filomena “is herself a former Eurovision host”? I mean, when was that and how did I miss it?
Anyway, all four ladies are probably fine choices, but four hosts is way too many.

Filomena was one of the hosts of Festival da Canção 2017 (the Portuguese national final for Eurovision).

I’m okay with the hosts being all female but four hosts is too many.

Hopefully they will be better than these three Autrichiennes of 2015…

Watch out, this year is going to be one of the best Eurovision years!!!
Hopefully the winner will be a deserving winner as well. I would love to see countries like Hungary, Georgia, Bulgaria, Czech Republic win the contest, which have never won before.
As for the hosts, so far they seem to be really good choices. 🙂

My apologies to Bernardo Pereira, who I absolutely adore, but this is how I see it:

I don’t give a [Ajax] about the presenters, usually. It’s not like they define our enjoyment of the contest. Just let them do their jobs, and enjoy the music. x

Pretty sure his story does nothing to prevent them from doing their jobs or to prevent fans from enjoying the music….

But they can: 2015, despite having some great songs, was an absolute slog due to having three hosts with no chemistry and seemingly no interest in what was going on, whilst the host everyone wanted was left in the green room. Then there’s 2014 or 2016, both of which were great fun because of the hosts.

The hosts are just as vital in putting on a good show as the quality of the songs.

I honestly never thought of it that way. Probably because i’m busy song reviewing when the hosts are on. 🙂

I hope William got my attempts at reply. The blog is not currently allowing these to be shown; I’m not sure why. If he’s angry with me then I’m sorry. Moderators can take down this thread if you like – it’s your blog.

Be ready for MDNA…

Fake news Rtp said that it will be a duo

I hope they cast 10 women to host

They wrote in a footnote that it would be two hosts. Will it be two for the semi-finals and two for the final? I’m sure Monday we will have the answer. Nonetheless, this is just a report. 🙂

Well, they did literally this for last year’s FdC, each show had different set of presenters. But wait… didn’t final have Catarina, Sílvia and Filomena together too? It’s too much of a coincidence, the above could really be a fake news…