Over the weekend, Romania‘s broadcaster TVR aired the live auditions of all the acts that aimed for a spot in the semi-finals of Selectia Nationala 2018. As we know, 60 acts advanced to the five semi-finals, but only 15 will make the national final cut. The jury will take care of that starting Sunday, but until then, you now have the chance to voice your opinions and vote for your favourite song — or songs — in our polls. First stop: semi-final 1.

The first semi-final will be broadcast live on Sunday, 21 January from Focsani, in the southwest of Romania’s historic province of Moldavia. (Not to be confused with Moldova, of course — different country altogether.) We invite you to watch the 12 acts that are going to battle it out for one of three places in the National Final of Selectia Nationala 2018 and then vote in our poll below!

Lina – “A love Worth Falling For”

Performance starts at the 23:00 mark

Performance starts at the 38:17 mark

Alex Florea – “Nobody Told Me It Would Hurt”

Performance starts at the 00:36 mark

Performance starts at the 19:12 mark

The best known name from this list is of course Alex Florea, who, alongside Ilinca Bacila and their song “Yodel It!”, brought Romania’s first top 10 Eurovision hit since Paula Seling and Ovi’s “Playing With Fire” back in 2010. The yodel-rap duo placed seventh and both singers are on a Eurovision high: while Alex is competing again in Selectia Nationala 2018, Ilinca will be judging his performance as a member of the national jury.

Speaking of “Yodel It!” and a fresh-faced duo, Alexia & Matei submitted a song written by Mihai Alexandru, the same composer who penned Romania’s yodelling hit last year. Could we have a similar success story on our hands with “Walking On Water”?

We also know Eduard Santha from last year’s Selectia Nationala, when he finished eighth. He has returned with a song that is heavily influenced by Gypsy music, with a Romani language title, “Mesom Romales”.

Selectia Nationala fans might also remember Elena Turcu as Bijou, who also submitted a song two years ago but failed to make the cut. Likewise, this is not Johnny Badulescu‘s first attempt, as he tried last year as well, but this year he did make it to the semi-finals with “Devoted”.

Three songs from each of the five semi-finals will be selected by the national jury to advance to the National Final on 25 February, but until then, you have the chance to choose your finalists right here and now. You can vote for as many acts as you want, but you can only do it once, so make it count!

We will reveal your top picks on Sunday, before the first semi-final of Selectia Nationala 2018 is aired, so make sure you cast your vote before Sunday morning at 11:00 CET. 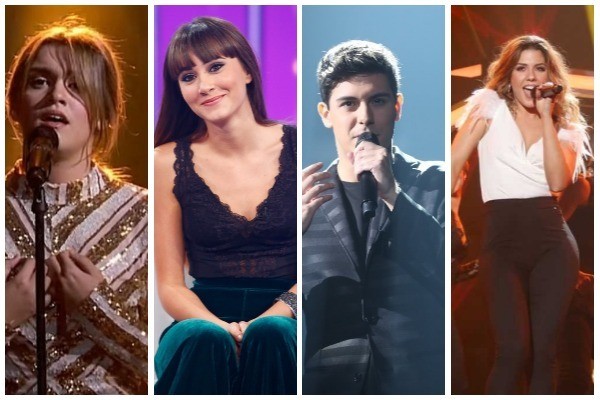 Prediction: The 3 qualifiers in my opinion will be: Alexia & Matei, Eduard Santha, Johnny Badulescu. I don’t believe that Alex Florea will get through, he’s got a pretty weak song and I think he is there just at the request of some songwriters, I think he knows he’s got no chance this year. Personally I don’t care too much of any song beside Eduard Santha’s ‘Mesom Romales’. It’s pretty original and unusual and he’s able to sing pretty well. Certain qualifier in my opinion along with Alexia and Matei. Third spot is for a fight. Anyone any idea why… Read more »

He wasn’t disqualified. He withdrew because of sickness (flu). He hopes to be allowed to perform in another semi-final.

Thank you for the information Bogdan!

Elena maybe, but nothing strong here. They all should stay in the semis, imo.

If this should be strongest semi according to Kris, I don’t want to listen to the other songs. In my opinion, it’s really a weak line-up. I hope Romania can improve with the next semi.

If I could choose none of them will make it. Putting aside vocal skills, which some have them and other not, the overall quality in this Semifinal is pretty low. But iF have to take someone, I would pick Elena Turcu, Alex Florea and another one. Listening to all these songs is a pain.

ugh This is so bad. I hope we will manage to send something decent.

If it were for me to decide, three qualifiers would be among this five:

Some of them have accent and/or performance issues, but still, these are the five acts I like and I can see them doing well on ESC.

As for the rest, decent ones are Elena, Lina and Echoes, even if their songs aren’t particulary memorable. Cornel just doesn’t sell his song on stage. Eduard Santha’s song is weird, I don’t know what to think. Waleska and Liviu’s acts are just disasterous.

Thanks for the support, ill do my Best on sunday, considering im sick as hell atm !

Hope you make it through this Sunday! Greetings from Croatia! 🙂

My favourites here are “Devoted” and “Mirror”. I really like “Devoted”. Beautiful ballad, good voice and potential. I liked it since the audio came out. I’m in the middle with “Mirror”. I like the intro and the rock vibes, but I feel it gets repetitive. Other acts: Waleska and CornEL clearly seemed nervous. “Rise up” has a good chorus but the rest of the song is not strong. “Mesom morales” started really well but when the rap started he lost me. Maybe it’s a matter of taste, as I don’t really like rap. About Alex Florea’s song, what I like… Read more »

Mesom Romales is the only good one, all the other songs are just boring and I feel like I’ve already listened to something similar even though I did not. Catchy, yes, quality, mno

Tom Hartis has the most eurovisionistic + catchy song in this competition. I hope he will perform better in the semi-final.

Be sure i Will ! Im sick as hell atm but im looking forward to get better till then !

True and his song is catchy, but his vocal qualities are pretty low from the version I’ve listened too. The song is also a little cliche, but it’s catchy, I’ll admit that. From what I’ve heard he was disqualified meanwhile, or he abandoned, I don’t know.

Alex Florea is one. The other two spots depend on how the songs will be improved and how professional the singers will act.

Thanks for the support, ill do my Best on sunday, considering im sick as hell atm !

Anyone but Alex Florea!

Serena for the win!

I don’t like the Walking on water song that much to be honest!! The guy in the duo ( I think Matei) is not that strong of a singer either!!

Actually the girl is Alexia :))

I am sorry, but I find this the worst group of songs in a national selection this year. It will be really interesting for me to see if Romania will pull something out of the hat and keep their qualification streak going.

Now that the Jury can’t pull down on the televote points …. I think whoever wins in Romania will get sufficient televote support for them to go to the final as long as it’s not as bad as Ovidou Anton

Ovidiu Anton would have fought for the title in 2016. The fact that you find it bad is not important, many found Lordi bad too, it didn’t matter as well. Also considering the message from that song, in televotes he would have been on top for sure, don’t know about the juries. Of course, EBU made sure that such a message will not be admited in their contest. The message against Russians was seen as more inoffensive and on their liking, a message for the entire Europe… not so good.

Alex and Eduard are my main favorites of the whole preselection.<3

Too weak to choose…..

I can’t choose it’s too weak, maybe the little duet is the only I would save but the song is not good too……

ALEXIA AND MATEI ALL THE WAY!

In Portuguese Moldova is Moldávia
xD

me som romales is my favorite somehow? there are not a lot of instrumental breaks in the NFs of any country this year, it’s nice to hear one