The 2020s are fast approaching. But when it comes to Eurovision the decade has already ended. It’s been ten years of ups and downs, with Austria experiencing the full range of emotions.

The Alpine nation notched up nine appearances, returning from a three-year break in 2011. In that time, Austria has recorded a last place in the semis, a nil points in the grand final and, of course, an iconic victory.

With a record like that, it’s clear that the country has had plenty of highs. But which of its entries did best and which did worst? Wonder no more as we’ve compiled a definitive ranking of Austria’s Eurovision entries in the 2010s.

For the purposes of this ranking, we’re going off the percentage of maximum possible points which each entry received at Eurovision.

For example, a finalist in 2019 could only receive a maximum of 960 points i.e. 24 points from each of the other 40 countries voting. If an act finished with 200 points, they would have received 20.83% of the points available to them.

This is not to be confused with the percentage of all votes cast.

Austria at Eurovision in the 2010s

Austria’s 2012 selection saw ten acts whittled down to a superfinal of two. In one corner was the hotly favoured drag queen Conchita Wurst, and in the other was the comedy rapping duo Trackshittaz. The latter won out scoring 51% of the televote to Conchita’s 49%. Alas, this uniquely Austrian brand of humour didn’t wash with Europe. “Woki Mit Deim Popo” (Wiggle Your Butt) finished last in an 18-song semi-final.

Heading into Tel Aviv, Austria was enjoying its longest streak of success in the modern contest — five consecutive grand final appearances. However, “Limits” proved that there was a limit to its good fortune. The delicate ballad sung by the internally selected blue-haird PAENDA became lost in the melee, placing 17th of 18 in the second semi. A last-place and some blushes were avoided thanks to an apparent scoring mistake from a Swedish juror.

After 2012’s disastrous outcome, Austria trimmed down its national final to just five songs. Natália Kelly comfortably emerged victorious, with “Shine” topping both the public and jury votes. Things did not go so well in Malmö. Lacklustre staging, an outfit better suited for drinks with the girls and the opening slot in the running order saw Austria come third from bottom in a 16-song semi.

Result: 26th in the grand final with 0 points — 0.00% of maximum possible points

Following an almost 50 year wait, Eurovision returned to Austria in 2015. To mark the occasion, the country went big and held a four-week-long national selection. This threw up The Makemakes with “I Am Yours”. Unfortunately, these efforts didn’t reap rewards on the song contest scoreboard. Despite staging that included a burning piano, the rockers failed to register any points. But they didn’t finish last. Germany also scored nul points and the tiebreaker rules favoured the entry performed earliest in the running order.

Despite a relatively successful national final one year prior, Austria went internal for Kyiv. The broadcaster opted for Nathan Trent and “Running On Air”. The cheeky chappy won over many fans and became a surprise qualifier. He seemed set for a strong showing in the final, sitting just outside the top ten after the jury vote. And then came the crushing blow. The public didn’t award Austria any points. To add insult to injury, split results released after the contest showed that the semi-final qualification was almost solely down to jury support.

Annoyed by a series of bad results in the 2000s, Austria went on a Eurovision hiatus in 2008. However, when its neighbour Germany took home the glass trophy in 2010, the country saw the light and returned in time for Düsseldorf. Nadine Beiler won a ten-song selection that also included Trackshittaz. “The Secret Is Love” was enough to take Austria to its first grand final since 2004. The juries were particularly enamoured with the entry, placing it fifth overall.

In a break from the norm for Austria, Zoë and “Loin d’ici” were considerably more popular with the public than the juries. This trend started in the national final, the country’s last to date, and continued through both the semi and grand final in Stockholm. In fact, the televote placed Zoë second in semi-final one and eight in the Saturday night show. “Loin d’ici” is also notable for being Austria’s first and only entirely French-language entry. And since France peppered its 2016 effort with some English lyrics, it was also the only song to be sung completely in French that year.

He provided backing vocals to two successive top five Bulgarian entries, but for 2018 Cesár Sampson offered his services to his native Austria. Yet another internal selection, “Nobody But You” easily qualified for the semi-final and surprised almost everyone by topping the jury vote in the grand final. However, as was so often the case for Austria this decade, the public saw differently and ranked him much lower. In the end, he had to make do with a very respectable bronze finish.

She missed out on the 2012 ticket by the slimmest of margins and her internal selection was met with objections both at home and abroad. But Conchita Wurst and her message of unity proved unstoppable. “Rise Like A Phoenix” won over the public and jury alike, giving Austria its first win since 1966. The character of Conchita has since been retired, with creator Tom Neuwirth now preferring to perform under the male-identifying moniker of WURST.

Do you agree with the list? What are your rankings? What is your favourite Austrian entry of the 2010s? Let us know in the comments. 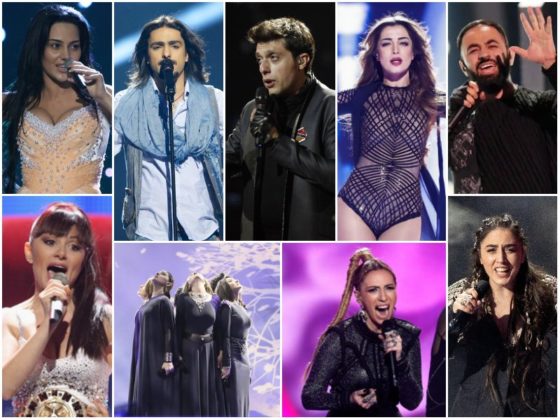 Confirmed! End of the beautiful mess – Bulgaria WILL return to Eurovision 2020

My favorite is Nadine.

I’ve liked all their entries since the comeback…yes even Trackshittaz! PAENDA was viciously underrated this year. I’d have thought the juries would have been more receptive to it being a more modern ballad – you could picture Jessie Ware singing this and it being used in a Hollywood movie. Alas, it did badly 🙁

Surprised that Nadine Beiler’s, a song that was considered to have performed poorly, actually did better than Nathan Trent’s, a song that got nothing but praise.

I really like both Paenda and the song, Limits, and was genuinely surprised that it didn’t make it through to the grand final. 2019’s entry was manifestly better than the Makemakes, Nathalia Kelly, or Nadine Beiler, to say nothing of Trackshittaz.

Austria, just like many other countries competing that year, were criminally underrated in 2011.

If i hadn’t listened to it again and again I’d forget Conchita’s song. I’d really just remember the hype that there was a drag queen with a beard.

Paenda not qualifying was a crime, as so many crimes in 2019. For me it should be right there in top 3 of this list.

Paenda and the Makemakes were underrated, while Conchita and Zoe were overrated…

Conchita and Zoe got what they deserve. They really stood out in their years.
Austria didn’t play safe which is always good. Both making Top 3 with Russian televoting over friend/diaspora countries say a lot

Honey you can‘t overrate the queen of europe!

Oh my. Basically, seven entries I didn’t care for and two I found tolerable (2018, 2016). Eurovision really seems to be the place where I cannot possibly become patriotic, ORF will see to that. We had one great option in 2005, though. Alf Poier of course won the voting but ORF, in anticipation of that, had hastily changed the system shortly before the NF so that their favorite could go crash and burn at Eurovision. ORF in a nutshell, really. Now, in general, I don’t care for Alf Poier, either, but sending that song and that message would have made… Read more »

Sounds like you would be Alf Poier himself. Nobody else would even remember his 2005 entry. 😉

Totally unrelated, but on Wikipedia it says that Hungary has withdrawn from Eurovision 2020. MTVA announced it yesterday apparently (29th October 2019).

Totally unrelated but relevant, which is more than what can be said about the entire article.

Traskshittaz are amazing rap duo. Pity, they didnt win national selection with their song in 2011. They could be in top 10. I am listening it still. Their 2012 song was not so good.

7 years have passed and I still wonder who thought sending Tracksh.ttaz to Eurovision was a good idea.

Because we love rap in Eurovision and they are great and funny!

I’m happy someone liked it, but it’s just totally not up my alley and in my opinion one of the worst entries they’ve ever sent. And don’t get me wrong, I love comedy at Eurovision (like Alf Poier, if we’re talking about Austria) but this is just… no.

2 years and I still don’t get why the jury in 2017 ruined Switzerland’s and Estonia’s chances to qualify and preferred a boring song like ‘Running on Air’. But otherwise Austria is a great country, I listen to their 2018, 2016, 2013 and of course 2014 songs all the time.

I remember watching Austria’s national final in 2012 and needless to say it had a weak set of songs so Tracksh.ttaz did stand out a bit, even if they beat Conchita in an extremely crucial Sliding Doors-moment superfinal of 51-49% but other way round we wouldn’t have witnessed the spectacular performance of “Rise Like a Phoenix” 2 years later and Austria ending a record long drought to win ESC again!

7 years have passed and I still wonder who thought sending Trackshittaz to Eurovision was a good idea.

Why isn’t The Makemakes last place in the ranking?

It was pre-qualified in the 2015 final, courtesy of Conchita winning the year before. So that makes it jump ahead of those that were left behind in the semifinals.

Oh I see; thanks for the explanation

A very interesting article. I didn’t know that the juries only were responsible for Nathan Trent doing well. Also, in my opinion, Paenda deserved more love from the scoring after such a moving performance of her song in the semi. A word on French-language entries for Austria. The article claims: “”Loin d’ici” is also notable for being Austria’s first and only French-language entry.” – Is that true? It depends how much French language was used. Austria 1966 (“Merci, Chérie”) had some French in it, for example. But it’s probably true that “Loin d’Ici” was the only 100% French-Language entry from… Read more »

The French in Merci Cherie was a mere sprinkling but there is a full version in the language which sounds pretty rad. 🙂
https://www.youtube.com/watch?v=EOwZ1xu7suE

How much love would you expect from the scoring when you couldn’t handle your own song?

“Loin d’ici” was also the only entirely non-English entry in the 2016 grand final.

Ah Austria.. my favourite ESC country. Have loved all of your entries as of late (Justice for Pænda) However, one of your choices in your Eurovision history keeps me up at night, not ConchitaGate in 2012, but the fact that if only you selected Alf Poier again in 2005 (‘Good Old Europe Is Dying’, the absolute foreshadow) you could have got a top 5 result in Kiev…. Oh what could have been.