Mikko Pohjola isn’t just a pretty face. He’s a talented singer and our readers’ favourite to win the final of #umk14 in Finland.

Over the past five days y’all have cast a total of 637 votes for your favourite contestants in Finland. Mr Pohjola won the poll with more than 21% of all votes. We know he has won fans for his dashing good looks, but we’re also fairly certain he won the poll because of his strong song. “Sängyn Reunalla” (On the edge of the bed) may only last three minutes, but it takes us on a real journey. It carries a lot of emotion and you don’t have to speak Finnish to understand that. Mikko also placed first with the Wiwi Jury, our in-house panel of music unprofessionals.

As you’ll recall, Mikko competed in the second heat, which was definitely the stronger of the two. Five of the six acts from that heat have made it to the final. During the televised broadcast, we learned that Mikko had finished second with the jury—only four points behind Hanna Sky. However, Mikko finished eight points ahead of third-place finisher Lauri Mikkola with jurors.

Is it possible Mikko has built up his fan base since then and is poised to pounce on Hanna while distancing himself from the others? We haven’t heard Hannah or Softengine (the automatic qualifiers) in several weeks….so perhaps familiarity will make Mikko even more popular.

Clarissa and Josh Standing finished a close second with our readers. They earned nearly 20% of all votes and were just 10 votes short of victory. This week they released their music video for “Top of the World”, which may help build momentum going into tomorrow’s final. Their song is among the most radio-friendly, which could factor into tomorrow’s result.

In any case, you can check out the complete results below. Who will you be voting for?

You can read our latest Finland coverage by clicking here. You can also keep up with the latest Eurovision news and gossip by following the team from wiwibloggs.com on Twitter @wiwibloggs and by liking our Facebook page. 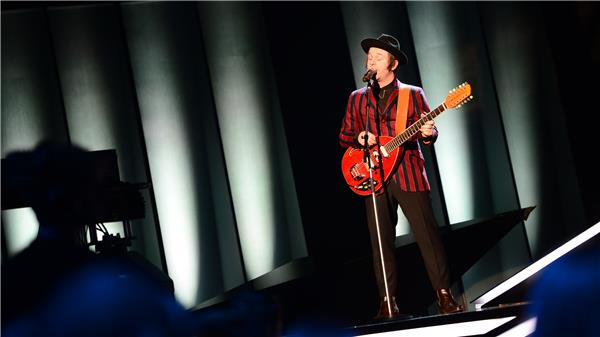 And please, not Clarrisa & Josh…

I hate to say this, but the real winner of UMK14 has already been sent home. Jasmin Michaela should have won!

Hannah Sky is the only artist I like. Everyone else sounds the same, really

Goooooo Mikko & Softengine!!! 😀 If Mikko performs as good as he did last week, he could just win :O! Can’t wait for tomorrow 🙂

willy lee adams i am not homophobic and have nothing against gays. i just don’t think you should write pretty face, delicious destan and stuff like that in your articles, cause eurovision is not a gay event (i know lots of esc- fans are gay), it’s a music event. i don’t think you should write your personal opinions and which artists you, personal are attracted to in your articles, cause not everybody agrees with you and there are actually male people who read wiwibloggs who are not gay. plus you often confirm the prejudices of the gay stereotype. if you… Read more »

if i were to judge, let it be LAURI to win for finland!!!! It may not be radio-friendly like that of clarissa and josh’s but to me, it is still a current entry!!!!

Hope is the only song I like since Jasmin got out. If Hanna doesn’t win I probably won’t like the Finnish entry, which usually is my favorite.

I think fight for victory between Softengine,Hanna or Hukka Ja Mama
Dark horse for suprise winner Mikko or Madcraft

I’d like for Finland to send something as less swedish as possible. May sound wrong, but hear me out: They tried three years straight with swedish residents who sounded a bit stale. Some finnish identity wouldn’t hurt. Mikko has a nice song, but it falls flat. Selja isn’t much better but I’d like to see them in Copenhagen. I took a liking to MIAU, but I doubt they can walk away with the title. The rest are either average or terrible (Don’t even think of clarissa and josh or Hannah).

MIKKKKKKO FOR THE WIN! YES!

Mikko, Mikko, Mikko! He HAS to win it! If it must be anyone else, let it be Hukka ja Mama.

the one who wrote this are clearly gay