At a press conference in Chisinau today, Eduard Romanyuta announced that he and his team would cover the financial costs of Moldova’s participation at the Eurovision Song Contest in Vienna, including travel expenses for the entire team and a promotional tour.

The Ukrainian singer also thanked the Moldovan public for choosing him as their representative and for “building a spiritual bridge” between Chisinau and Kyiv. Eduard Romanyuta, who won Moldova’s national selection O melodie pentru Europa with “I Want Your Love”, will open the first semi-final. The singer said that he was honoured about being picked to perform first at the 60th edition of the Eurovision Song Contest, noting that he was also drawn first at the first semi-final in Moldova, which proved to be a good omen for him eventually.

The Ukrainian singer also announced that the promotion tour, which he would pay for as well, will include Eurovision in Concert in the Netherlands, the London Eurovision Party in the UK, as well as TV appearances in Armenia, Georgia and the Baltic countries.

The 22-year old singer, who is reportedly a millionaire, understands that Moldova lacks the financial resources for a successful show and is ready to dish out cash to this end. At the time being, it is unclear how much Eduard Romanyuta is willing to pay.

The singer also admitted that no Moldovan artist congratulated him for winning the national selection. “I received no message after the final. They don’t know how to lose,” he added, hinting at the outcry following his victory, when his fellow contestants accused him of buying jury votes and rigging the televoting.

Yesterday, the singer shot the first part of the postcard in Chisinau. As other contestants, he “received” a relatively big package on “his” doorstep.

He was also seen on the streets of the Moldovan capital at the wheel of a baby blue vintage Pobeda car.

Asked by the journalists at the press conferences about his chances of qualifying for the Grand Final of Eurovision 2015, Eduard Romanyuta said that he not only hoped to qualify, but also win the entire thing with “I Want Your Love” and bring the contest to Moldova.

What do you think about Eduard Romanyuta’s chances of qualifying for the final? And does he stand any chance of winning? 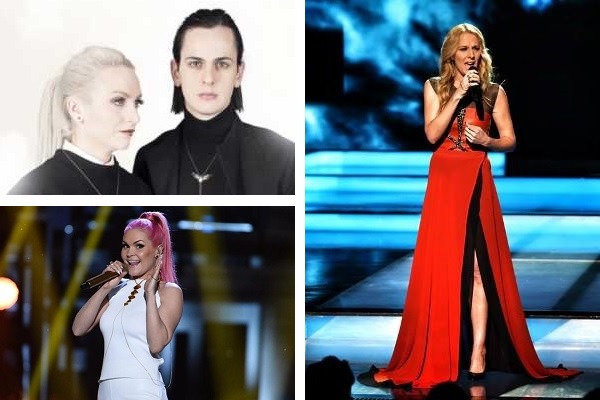 I wish for him the best

Is he manager that guy who months ago said that will send an Ukranian entry to Eurovision and all $$$$ financial by him ?

@Racal: No, voting for a song you like doesn’t mean “objective” voting. Voting for what you prefer is actually the opposite, it’s subjective. And no, I don’t agree with the idiots who keep voting countries instead of songs so do not put words into my mouth, I never said I find it normal. Those idiots do not represent the whole voting public though, so don’t throw bs like “we can’t expect objective voting from such countries” at the ones who actually vote in a fair way.

So he is Millionaire? I thought that he was very poor… I was thinking that he was wearing those clothes and that haircut because he can’t afford a decent one.

To be honest Alex with all money his got ,he Is a sad guy and a spoiled brat.

i have a felleng that Moldova won`t get this year 12 p[ts from Romania.

Not sure what is objective vote. There are a hell lot of factors that influence vote most of them senseless. Both public and jury vote.
12 points between Greece/Cyprus, Romania/Moldova, Turkey/Azerbaijan are very probable because these are 2 countries – one nation type of states. Is like you can vote for your own country’s song, of course it will have strong support.
Not sure what support will Eduard have though. He looks more like a lone wolf with some money seemingly from non transparent sources. In his promotion tour Romania is not included, that is strange.

“They don’t know how to lose”?! You little spoiled bastard! You don’t know how to fairly win!
In Ukraine it was obvious he will appear in Eurovision 2015 few months ago already, but his team was looking for proper country to represent. And Moldova accepted this corrupcy. Totally disaster. I hope any other artist will hurt because of this untalented guy and he will be last in his semifinal.

@WTF: Saying that everyone does it is not true, you have 5 regional voting blocs and that’s it. Objective voting means that you vote for the song that you like (which should be normal practice for the Eurovision “Song” Contest), not for the country it’s representing. And that’s basically it: those political voters don’t vote for the song they *like*, they vote for their neighboring countries and they should NOT be free to do so (that’s the spirit of the juries that were reintroduced). Funny thing is that this overuse of political voting started in the 90s when certain countries… Read more »

Ralph Siegel probably pays for a great deal of the San Marino team’s expenses too… and Koza Mostra had to pay for much of their expenses too in 2013. This song’s in my top 10. People have been giving Romanyuta a lot of crap, but I see no real proof that he actually paid for the votes. It all just seems like a way for people to mask over their frustration about a foreigner winning. Yes, he’s got a lot of money, but there are plenty of artists that are stars in their own country and who could probably pay… Read more »

@Racal: It’s not a justification but singling out Romania and Moldova when everyone does it is very lame… What do you even mean by “objective”? Music is not objective, everyone is free to vote for whatever the hell they want to vote.

Btw, I also believe he wrote his Wikipedia article himself, where he’s auto-congratulating himself with such comment as “Eduard remains the most desirable confirmed bachelor in the country and his heart is still free and open”: http://en.wikipedia.org/wiki/Eduard_Romanyuta

This is super funny! 😀

@WTF: So basically, what you’re saying is that because other countries are experts in terms of political voting, it makes it ok for you to do it? Greece/Cyprus exchanging their 12 points on every single occasion makes it ok for Romania/Moldova to do it as well? That’s a very lame justification… This article is about Moldova so of course I’m bashing about them, but there’s no such thing as fair political voting from ANY country (no wonder they get booed by the crowd more and more every year). And yes, I confirm: we cannot expect an objective votes from such… Read more »

@Racal: Can’t expect any objective voting from such countries, eh? Well, I guess you could expect some fair voting from the Eastern block? No, they all fucking vote between themselves. The Nordics? Nope. The Baltics? Same. The Balkans? Tough luck. Greece and Cyprus? Lol… Slamming us like we’re the only ones with questionable voting, really? I’m not even sure we’ll give Moldova the douze points this year given how crap their song is.

Oh i forgot to add:,He is the worst version of Justin Bierber.I hope he reads the coments 🙂

I cant help myself on comenting here,after i read the article 3 times,my advice to Romanians is to novote for him..He is Arrogant,thick and apart from the he is deluded by sayng that he is absolutely sure that he will qualify in the final and wing the Eurovision.Eduard R.grow up ,you spoiled litlle brat.Sorry formy outburst.

This act is 100% ridiculous. The song, the singer, the vote rigging accusations, his so called millionaire status, his arrogance, etc. It looks like a prank. Saddest thing is that he actually has chances to qualify, with Romania voting in the same SF as Moldova. We cannot expect any objective voting from such countries: they will exchange their 12 points, that’s for sure.

His comment “they dont know how to lose”…. uhhh no Eduard. what an arrogant thing to say!

First reaction of some girls I know before reading interview: Ugh, this ugly boy… I would never date someone like him… Hope he is last

Second reaction of some girls I know after reading interview (maybe after realizing he is millionaire): Oh, he is cool… He will go to final, maybe even Top Ten… Is he single? Has he a girlfriend?

I’m sure he will be last in whole contest. He can’t sing and the song is mweh.

He won the conte$t in a total fair way, $traight to the final xD I don’t think he ha$ any chance to qualify, he can’t afford to buy so many votes.

Rather then sai8yng that he pays for his team etc,it would have Been nice to say ~IM A MILLIONARE AND I WOULD LIKE TO HELP MY UKRANIANS FELLOWS WHO SLEEP IN A GHETTO ~DUE TO WAR~But hey he is a singer,whatthe heck.lol

“Reportedly a millionaire” is not the same as actually being a millonaire. Is this fact or fiction? Don’t make any judgements until you know.
Bogdan, where did this information come from? Is there any evidence?

Well, that’s very nice of him, although it does fan the flames of the theory that he just bought the whole thing. The moldovan broadcasters probably rigged the selection so they could have a eurovision entry for free, and in return Eduard gets to perform at ESC the year Ukraine isn’t participating. It’s a win-win situation, except for the moldovan public. But you know what they say, innocent until proven otherwise.
In any case, I love his song and hope he makes it to the finals.

Sorry, Eduard, the predictable 12 points from Romania won’t get you through to the final. Karma’s a bitch. 😉

All this attention and promoting he’s doing will skyrocket him. Plus, he’s filthy rich so he’s going to the final. Top 10? Not sure but he wont be in the bottom 5. I see him placing kik Greece and Poland last year where he gets the pop vote but is hated by the international juries.

The song is very catchy and very fun, but Semi 1 is super strong and by the time all is said and done, few will remember Moldova at the start…

Makes sense that he bought his victory then

He understands that Moldova lacks the financial resources for a good show, yet wants to bring Eurovision to Moldova. Like, I enjoy the song but wouldn’t it be a bit hypocritical to say that?

Seams that you can buy a victory and representative in Eurovision

Seams that tou can buy a victory and representative in Eurovision

what being millionare has got to do with his music?.your rich keep it to yurself.Dont shout to the world .Oh i forgot manyu rich people are thick

Well this makes absolutely sense if he is millionaire dollar boy then.. Moldova could not afford anyway for his mini pre-Vision european tour so he did not have any other alternative choice rather than paying 4 himself his own travel costs.. Ok his song is not that bad to be honest… Moldova might be outsider on the semifinal but the scenario of qualifying after all to the final is not impossible to happen…I do not find it so unlikely.. We will see how it goes on May.. I’m not marking off almost any country from the semifinals from its any… Read more »

This song would have been a top 10 contender if it was in early 2000’s. Seriously, he’s a millionaire and couldn’t pay anyone to write him a decent song?