Earlier today, the Wiwi Jury— our in-house panel of music unprofessionals — travelled to Andalusia. While we enjoyed some pescaíto frito in a restaurant with amazing views of Doñana, we reviewed the contestants of Objetivo Eurovisión, Spain‘s national final for Eurovision 2016. Today, we share our thoughts on María Isabel “La vida solo es una” (There’s only one life). Did we want to spend the rest of our life next to María Isabel? Read on to find out…

Angus: Summer is here! This is the kind of sun-drenched electro-Latin-pop that charts right across Europe and “La vida sólo es una” is lyrically compelling. The key question in setting this apart is how much it relies upon production tricks for finished effect, because there’s no auto-tuning on the Eurovision stage and Maria Isabel will have to carry it home. Vocally this could also do with some diversity as it lags, especially through the bridge and fade at the end.

Antranig: Maria Isabel delivers the perfect combination of authentic Spanish flavour and plenty of fun in the hot summer sun. Considering that it’s summer here in Australia right now, that makes it even more perfect. I was surprised they chose a previously released song but this would be an amazing choice for Spain, sung by a woman with winning experience!

Bernardo: Maria Isabel already has me dancing to “La Vida Solo Es Una”. As an Iberian, it’s impossible not to be conquered by the Latin flavour. Maria, you slay that choreography and you will go to Stockholm, because this is pop-dance-Latin magic. I do want to be “but a millimetre away from you”. Give me life and vocal acrobatics and you have this in the bag.

Deban: The opening bars hold much promise, but this wears off pretty quickly. The production slays, but the ‘la la la’ chorus is rather lame. This entry encapsulates elements that I love and hate at the same time. 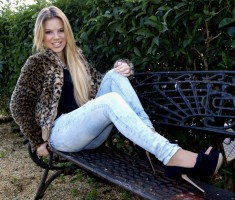 Diego: I’m so sorry to say this, but this is what we have to move on from in Spain. Enough of the Spanish-flamenco flavour mixed up with some pre-made electro-pop rhythm. I would be glad to hear another kind of song from her, since she already conquered Junior Eurovision for Spain — the only time we won the junior contest. But this entry doesn’t bring anything new to the adult Eurovision.

Luis: I’m not impressed. I like that María Isabel has kept her freshness and spontaneity, but her song is not strong enough to move to the big leagues of Eurovision. “La vida solo es una” is a summer hit attempt that would have little to do with Stockholm, even if María Isabel could elevate it with the performance. The “nananana” hook is decent, still I’m disappointed. Not that I’m a big fan of hers anyway, but one expects a big banger from a Junior Eurovision winner. This is not it.

Mario: FYI, this song has been on loop ever since its release! It’s everything – upbeat, seductive, mesmerising, commercial but still true to its roots. Maria Isabel does a nice job voguing without being sleazy at all (and that’s hard to achieve these days, y’all), and the choreography is all ready for Eurovision. The music video leaves me desperate for good weather on the beautiful coast, although I’m literally a five-minute walk from similar scenery.

Mikhail: Well produced pop and Latino mix, but something is missing. You should add some flavor to it and then I can call it a candy. Right now it is a lollypop that tastes of water. It does nothing for me and I forget about it the moment it finishes.

Robyn: I like like what’s going on here, a mix of contemporary electro pop with sunny Latino flavours. I wouldn’t want to see the lyrics changed to English – if “El Perdón” could manage to be a massive European hit in 2015, European audiences obviously have no problem with Spanish lyrics if the song is good.

William: Maria Isabel has real soul — and it stands out even amid the pulsating rhythms and tribal drums of “La vida solo es una.” The opening really draws me in and Maria’s sultry sounds and an overriding sense of optimism keep me there. At times I feel like it goes on just a bit too long, but I’m confidant Maria can elevate it during her live performance. We only have one life and I’m ready to live it so long as this song is playing! Wiwi Jury: Iceland’s EVA with “I See You” It was okay for her, but that songs is more than enough to represent Spain in Stockholm. After all, of all the songs in Objetivo Eurovision, this one has the full potential compared to Barei’s and Salvador Beltran’s. A victory for her will increase their chances of hosting in 2017. A loss would spell disaster for Spain

It’s a good song but it isn’t right for Eurovision. Spain needs a banger and although this is a very good song the chorus doesn’t elevate it enough. If Maria had a more powerful voice or the chorus was more…. I don’t know stompy (if you know what I mean) then it would be a good choice for Spain. However in its current form it just leaves me wanting. All in all a very good song but it sounds like a load of other Spanish summer songs. They’re hundreds of other songs that sound almost exactly the same 🙁 My… Read more »

Diego and Luis these scores are unfair, I get you prefer something else to win but a 4??? You’re bitter this could win and don’t want it to, one of you even gave a 9,5 to Electric Nana’s song even though you admited you didn’t quite like how the song was right now but you refuse to give the same benefit to Maria’s song…. okay….

I basically second everything Briekimchi said, it would be a nice addition to the contest, I highly doubt there would be another song of this style so it would be different in that sense. Certainly not winning material, but none of the spanish songs this year is anyway, so why not having fun if you’re not going to win?

It’s very much a hispanic trait to diminish things produced in home soil and praise everything foreign, so I’m not surprised the spanish jurors are giving their lower scores to the songs in spanish with latin rythms.
I don’t think at this point there’s any latin fatigue in the ESC, Spain hasn’t sent a sunny danceable song since 2011.

It”s just pathetic diego and luis giving her poor and unfair 4 – really less than 5???come on – just because she is the strong contender and they are barei boyssss.

Unfortynately we will send a flop like xuso or the super “modern” barei. Out of spain barei is nothing new.

Pity, another edurne result is coming

This is Bombo #2, and i’m pretty sure it’ll succeed the same way. Just give it a chance guys.

Its so curious how lowest rates come from Spaniards. Bombo by Adelen was a hit and LVSEU is pretty the same so it could do not exceptional but well, but they always have that complex and try to sell what they are not.

It’s “funny” how we Spanish, and both Spanish juries, don’t want this in Eurovision (or at least I prefer other songs before), but the rest of Europe does want. Although all of us know that in the end nobody will vote for her in the final.

Spain has still not learned any lessons. Wake up and see how the ESC is progressing very quickly and what the current trends are in the ESC. Either you want to do really well in the ESC or you just want to take part again. One thing it does mean is singing in English, that is for sure. Even in English this song is below average same old, same old we have heard so many times before and is a bottom 5 disaster waiting to happen. (I see Antronig still has plenty of 10’s in his bag, hehe!!) Awful song… Read more »

If she nails her performance she will win the national final for sure..

I know this has nothing to do with this post, but Terry Wogan has died of cancer! I’m so sad right now. Eurovision legend.

Wow this got a lot of 10s! Maria is awesome, I wish her the best of luck tomorrow!

Perfectly acceptable song that would sell. Has no chance of winning Eurovision but then again, Spain tried too hard last year. Better to be realistic than disappointed.
I think it would be a welcome addition to the contest and bring something different.