She sings about falling stars and during her first rehearsal at Eurovision 2016, Moldova’s Lidia Isac went intergalactic. Standing centre stage and serving face, she vogues and twists and works her hand choreography like no other. To keep things interesting an astronaut in a space suit appears beside her and they bob and sway together. It may sound kitsch, but it keeps with Moldova’s unique and laudable brand of crazy at Eurovision.

In terms of staging the LED was rather simple — just a vast blue space, presumably indicative of the sky. Earlier in the day the stage swallowed Finland. But for some reason the vast amount of space works well for Lidia, perhaps because of the space themes present in her lyrics. Vocally she was on-point and the backing gives this the power it needs to be a proper club banger. Previously I worried about the song becoming monotonous, but the visuals and dancing spaceman have sorted that out. 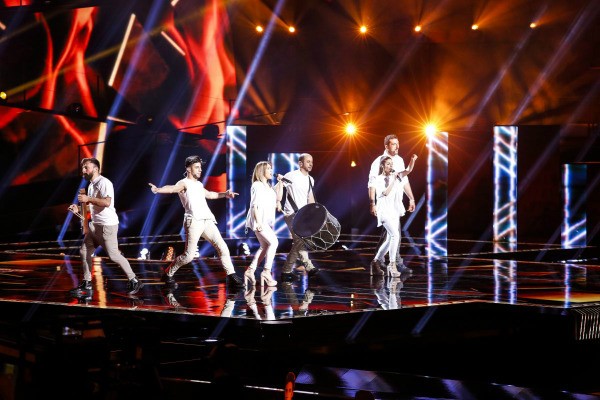 The song is one of my guilty pleasures as well, but I agree with Edd on the staging. They either have to get rid of the astronaut or go all in and add at least some stars. This way it just looks weird and doesn’t make sense.
Anyway, I don’t think this will qualify.

wayyyyy too campy yikes
this better not qualify

a prop might appeal to a TV audience but juries don’t buy them: it could work but it needs to because the song is a bit dated

I really like the staging with the astronaut, this could also be another qualifier

8DaysToGo I 100% agree its such a guilty pleasure pop song

When will 30 second videos be uploaded by the Eurovision channel?

I’m really glad! Moldova is really one of my guilty pleasures and I’m loving the sound of the performance! I just hope the videos are released soon, they’re taking ages. It wasn’t like this last year!! Finland has been off the stage for an hour and a half, and there’s still nothing. Does anyone have a possible time when they’ll be released??
Good luck Moldova:).