Uh-oh, uh-oh-ohhhhh! On March 12 the Eurobubble burst with excitement as San Marino revealed that Eurovision icon Valentina Monetta will return to the contest for a fourth time.

The 42-year-old Sammarinese singer previously took the beautiful Republic to the final in 2014 with “Maybe”. That followed two previous attempts with 2012’s “The Social Network song (Oh oh-uh-oh oh)” and 2013’s “Crisalide (Vola)”. She is the country’s only artist ever to make the final — and following two years of non-qualification, San Marino is keen to taste the Saturday night show once more.

Valentina won’t be alone in Kyiv. As previously reported, San Marino wanted to spice things up with a duet and has selected the American singer and performer Jimmie Wilson.

Born in Detroit, Jimmie studied acting in Hollywood and had his first major role in Sisterella, a musical produced by the late Michael Jackson. After the European tour of “Sisterella”, he started a life for himself in Germany and has subsequently starred as Barack Obama in the musical “Hope”. Could Valentina one day play Michelle in the revival?

Written and composed by Ralph Siegel, San Marino’s entry “Spirit of the Night” is an addictive eurodance track with lyrics by Steven Barnacle and Jutta Staudenmayer.

San Marino debuted at Eurovision in 2008 with Miodio and the song “Complice”. The microstate subsequently withdrew in 2009 and 2010, but returned in 2011 with the song “Stand By”, performed by the Italian singer of Eritrean descent Senhit. The entry placed 16th out of 19 in semi-final one.

The country missed the Saturday night show yet again in 2015 and 2016, although on the latter occasion they came painfully close. Serhat’s “I Didn’t Know” finished 12th in semi-final one.

Are you happy with the choice? Do you think San Marino will qualify to the final again? Shout out on the wiwibloggs app, or leave a comment in the comments section below! Steps or Lucie: who would be your favourite for the UK? 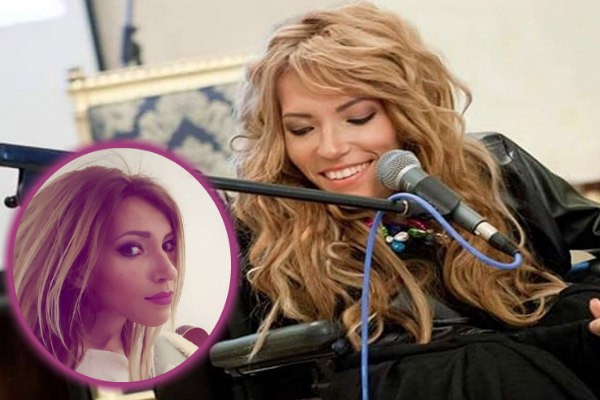 I actually think SMRTV might have chosen Valentina because this might be their last appearance in the contest. Hence, they wanted to give the fans one last “highlight”.

What’s with all the swearing at Eurovision this year? I don’t like it.

honestly woman… get a LIFE! hundreds and hundreds of artists trying to step onto that stage every year, having to go through really tough singing competitions to make it to the Eurovision and she gets to enjoy the experience FOUR times nearly in a row without effort… Outrageous… and disgusting.

I think Valentina has become an unofficial Eurovision tradition at this point.

But seriously, except for that God-awful “The Social Network,” her later two songs were actually pretty good.

Her current song, however, isn’t all that great, but it’s still lightyears more respectable than The Social Network.”

Can we ever really forget how awful and embarrassing “The Social Network” really was?

This is good news for fans for sure!!
Valentina is so related to ESC! It’s a pleasure to see her back! I love her too. She’s such a nice person.

Here we have an entertaining, party song! This is definetely better than last year’s disco “I didn’t know”. It seems very 80’s but it’s not that bad.
San Marino is in the 2nd semi, so everything is possible. But it’s difficult whatsoever.

Will it qualify? Who knows?

”Make your mouth slightly smaller, unless you want to see the DARK SIDE OF (THE) DE MOON – a former skillful hater.”

What I notice is that you are 45 years old man and you talk too much about how sweet are the under age girls. And you are a bully in order to protect your under age love object.

All those DeMoon, Noon, Moon, just stop, I see you.

@Tazmanian DeMoon and lastly, you do know what democracy means right? In case you haven’t experienced it, democracy is about having an opinion & having the options to like what you like. Toodles for now b**ch

@Tazmanian DeMoon gurl, bye at your illiterate posts which only you can understand. What makes you think i only like Sweden? I like many more other songs like from Italy, France, Spain, FYRM etc etc. I just don’t like your silly song, and nothing will change that, specially with your illiterate thoughts

Fun does not equate to cheap. That’s all i’m gonna say

She’s finally learned to sing without an accent – can it be true?

Jimmie, you are phenomenal cousin! and Valentino Marino too

I don’t care about trolls, multiple names, not even about offensive comments.
But there is somebody here that is worst than anything, because always ALWAYS makes threats against anybody that disagrees with him or her.
Is the user Tazmanian DeMoon.

I, unironically, like this disco bop! I don’t even mind that it’s a Ralph Siegel track. IDK what’s happening to me. The next logical step for San Marino would be a Serhat-Valentina duet next year. 😀

Oh and “Could Valentina one day play Michelle in the revival?” cracks me up. LOL!

Horrible song. Love her. He has a decent voice. Not a chance in hell it will qualify.

The friendship televotes are one thing, but to bring jury just to vote the other way around is not the solution.

@Austrian Ari: Thank you for explaining about Ralph Siegel. 🙂 (It doesn’t change my view that he’s an amazing songwriter.) About the key changes in this song – I count three key changes in the main part of the song, but if you count that weird “extension” on the end of the video then it’s four key changes. So it depends how you count. But it doesn’t beat “Chain of Hearts (2015)” – that had FIVE key changes!! 😀 N.B. Of course nothing beats the Steps cover of Diana Ross’ “Chain Reaction” – that had SEVEN key changes I believe.… Read more »

Monetina Valetta to the whining!! Ka-Ching!
Now I only wonder who will represent Valentina Monetta next year because obviously ‘The state, that’s her’ (sounds better in French).

I have no idea how, but this is my top 10 placement & I don’t care about every other song. The first 6 songs are the ones that I like, while the last 4 are the ones just to round up top 10.

OMG. What happened to my taste or why is this year so weird? LOL

And I am not even a hardcore fan!

Blimey, this is on repeat on my list. The f**k! Hahaha…

I would revisit my favorite tracks once everything settles, but I now I kinda dig songs from countries that normally stay in the Semis or haven’t been in the top 10 mostly or not at all.

THIS IS A FUNNY YEAR! OMG! Hahaha

@Tazmanian DeMoon:
“So, we are ALL HAPPY about OUR SONG!”

@PP: I did not understand a single sentence from your comment… But yes, the calculation system changed in 2013, so what? The important thing is that juries are here to stop gimmick entries (like Poland 2014, Finland 2015, etc.), diaspora and neighbouring vote, and they should never go away.

In weird why San Marion don t send video 3.00 minutes long, this video is 3.55 minutes long and they must cut their song from video for 55 seconds.

@Danny McEvoy Actually officially there is 3 key changes, 2 choruses, 2 Verses and one bridge

Am I right? First black artist at Eurovision in two years? #celebratediversity (at last)

I like this song for me 2 nd best song from San Marino . First was 2013 than 2017 and then 2014, 2011…. Many said outdated, and what to say bookmaker favorite Portugal, song from The Netherlands, and song in past Beligum 2016 who got many votes from juries and get so small points for Poland, Serbia, Austrai because song is for they outdated by Beligum wasn t outaded for them.
Male singe for me is look like singer from The Netherlands 1996

Im glad she is back…. But the song is a dated messy cheap disco song which I actually dislike. Good luck anyway!

Yay she’s back!..wait why Ralph Siegel again and why not a jazz song this time? oh well I’m glad she brought Jimmie Wilson. This year’s theme is about celebrating diversity and we need some American flavor to spice up ESC since Estonia didn’t send Kerli

Such wonderful news, I love Valentina. I’d have preferred a song that would show off her amazing voice more than, but I actually like the song and they complement each other well. This has made my day.

I read comments like “Guess what, we have moved on from Euro disco long ago”. Well, not so long ago since Belgium made the Top 10 last year with a vintage disco song.

This song is so strong I think Valentina will be in top 10 in final. Her song is similar to “You are the only one”. I listen it first time and I think it`s winner song:)

Now that we have listened to the song, I have a radical idea. Can we (both televote and juries) make a real effort and actually try and get San Marino into the grand final?

Considering that most of the songs that are chosen this year are extremely generic, this to me is a breath of fresh air.

Also, the fact that Jimmie does musicals explains why he didn’t question the production qualities. I truthfully find it hard to listen to the Hamilton soundtrack for the reason of how simple the production is

This track and Fusedmarc’s can go hold hands in terms of synths used. However, in terms of vocals, Jimmie is a showstopper and Valentina is great as usual. Ralph’s songwriting is more on point here than usual – just wish the production had been better. Nice to see San Marino go homegrown again and as Robyn says, God bless Valentina.

One of these years they should let her do jazz though 😉

OMG this poor girl, Russia has gone for major sympathy.

She’s in a wheelchair, and has some condition where she cant talk or sing properly.

THis is cruel to watch

Even after the Season 9 Drag Queen Valentina, she still controls you all. #divasdontdie

@Austrian Ari Russian music producer of Channel one has said earlier that they are participating this year just for participation, with no ambitions. I don’t think the song is going to be awesome.

The fact that Ralph Siegel of all people composed this kind of surprises me more! This isn’t as bad as everyone is saying: the song is pretty fun, and the arrangement of their vocals makes it worth being a duet. It doesn’t sound weird that they’re together, and I can imagine this being quite fun in Euroclub and all the pre-parties leading up to the Contest. In fact, if they stage this correctly, this could be their best result ever!