All 40 participating countries have now revealed their Eurovision 2015 entries and submitted them to the EBU. While we all gear up for the big event in May — charge your wind machines! — let’s look back on some of the highlights of what has been another memorable year of national finals. After all, it’s not all about Melodifestivalen…

The action kicked off earlier this year than in the past, with F.Y.R Macedonia’s Skopje Fest and then the Malta Eurovision Song Contest in November. Malta had a fabulous Junior Eurovision stage already in working order, so why not tack on a national final? Amber emerged victorious, but had to slay a likeable bunch of singing nuns first. In Cyprus, CyBC got serious with its Eurovision Song Project — and former Eurovision participant and juror Alex Panayi got all emotional. Norway’s 2009 Eurovision winner Alexander Rybak fielded the much-talked-about girl group MILKI in Belarus’ Eurofest, but Uzari & Maimuna dashed his hopes.

National Finals season was at its busiest in February. Wiwi Jury favourite Siru suffered a shock exit in the semi-finals of Finland’s UMK. Latvia became an unlikely success story thanks to a certain beaver on their brand spanking new national final Supernova. Linda Martin was on her best behaviour in Ireland’s Eurosong. Monika Linkyte ended up having a wardrobe malfunction on live TV during the final of Lithuania’s Eurovizijos atranka. And SunStroke Project along with a certain Epic Sax Guy made their return to Moldova’s O Melodie Pentru Europa, which was eventually won by a Ukrainian.

As we edged towards the end of the season in March, the drama didn’t stop. The eventual winner in Germany’s Unser Song für Österreich dropped a now infamous bombshell, and Ruslana stole the limelight in Romania’s Selectia Nationala.

But which show was your favourite this year? Let us know by voting in our poll below. You can vote for as many national selections as you’d like but you can only vote ONCE. So make it count, y’all! The poll will remain open until April 14 at noon CET. Jalisse interview: “We are honored to bring the Italian music in the world” 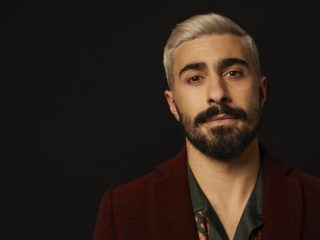 Italy all they way!

@Chris: Interesting way to put it.

There was so much drama in some of the NFs this year. At Ireland and Greece’s. the Top 2 favorites to represent their countries flopped during their live performances so another song entry overtook them lolz my vote goes for Latvia because of that beaver heh heh

Oh, I forgot: the Estonian final was great too.

Hmm… when I said Finland the first time, I only said it because there were so many amazing songs. Taking other factors into consideration (i.e. voting system, voting results, quality of broadcast), it’s a bit different. I didn’t like these selections: – Belarus: absolutely unacceptable audio on the stream – do they not know what a noise filter is? – Moldova: lousy audiovisual quality – Ireland: way too much time wasted on commentary and silly games instead of allowing for more than 5 songs to be in the selection. Why don’t you listen, RTE? OK: – Sweden: the final was… Read more »

Dansk Melodi Grand Prix always way underrated. Stages, atmosphere and direction worthy of ESC itself. Plenty of good songs, epecially in the pop genre and a real sense of event, far more so than the majority of those voted above it. Good job DR once again this year. I’d be more than happy if DMGP was extended into a full Melodifestivalen length season.

Supernova (Latvia) because of Riga Beaver 🙂

Sweden for the production, Romania for the emotions (Ruslana!), Norway for creativity (the orchestra). Germany… for drama (a joke).

MELFEST?…well…a big investment… you can’t EVEN compare this one with the others…because of the MONEY!!! …I think Romania’s final was great! Have you watched Ruslana?! ..and also Norway, Grand Prix 😉 Love from Spain !

malta had the best stage ..

Eesti Laul was head and shoulders above the rest based purely on song quality, and even then the winners got 79%…i think Elina and Stig are taking it all home to Tallinn!

Now all the entries are published ! Why wiwibloggs is not making a poll to vote our favorite song ?

Hey guys! I made a chart counting points from 100 personal charts on youtube! You can vote for your TOP 10 in comments! ttps://m.youtube.com/watch?v=7HDzeGpEUeg&hl=en&gl=LV&client=mv-google

Melodifestivalen is a mini Eurovision

Finland had the best one, I think.

I think that Melodifestivalen can only be compared with ESC because if we compare Melfest with the other NF’s, the Melfest kick their asses HAHAHAHA

I pick Melfest and UMK

i also watched DMGP and Die Entscheidungsshow they were nice, and MESC was so BOOOORING!

Oh and I watched a bit of San Remo and it was in the last day, nice too, the italians make great productions

Eesti Laul is simple, effective, and I love the logo.

I’ll say it’s Melodifestivalen, in my opinion this year’s songs are doing really well, and my top3 swedish songs all get their good places :))) Besides, I also followed Lithuania’s “Eurovizijos” dain? konkurso nacionalin? atranka, cause of my favorite Vaidas 😀 I wish to see Norsk Melodi Grand Prix and Sanremo, the former one I only saw the voting part due to just finished the Melodifestivalen, and the latter one is because the italian songs also did very well this year!! I really love their 1,2,3,4 places :))) But I know it’ll be impossible for Italy to offer the full… Read more »

MGP and Eesti Laul were amazing and my favourites (as always), but I was also really impressed with Iceland and Latvia’s national selections. Melodifestivalen wasn’t that good this year but our winner is pretty good I think. There were some other good songs but considering how huge the Swedish music scene is and how open our artists are to doing MelFest and ESC, the quality was disappointing. I liked Germany too but that was no surprise. They picked the wrong winner (again) though. Laing was robbed!!!!

@Ewan, @SteKay: I was ready to go with MelFest, but I had to give it to Norsk Melodi Grand Prix, because of its near-perfect balance between points-worthy songs and entertainment. My #1 pick for Norway was Marie Klåpbakken, but I would have had no trouble at all supporting Staysman and Lazz, who provided an even more amusing barnyard hoedown than Hasse Andersson at MelFest.

Forgot to say Sanremo is in a completely different level than all others, and leaps and bounds above Melodifestivalen, which is more popular among eurofans. I mean, you don’t see Ed Sheeran being the interval act in Sweden do you? Although I guess the dude from “What does the fox say” is the next big thing after that.

I hate to be repetitive and say Melfest, but really, Melfest just wipes the floor with every other selection. I liked USFO, UMK, NMGP, DMGP and even Belarus’ Eurofest, but all of the results from those shows upset me greatly (still crying over Milki, Fahrenhaidt, Suitcase, Opera Skaala and Karin tbh). I thought A Dal was good as well, but for everyone who doesn’t understand a lick of hungarian, much of what was going was lost on us, because of the jury giving their opinion and stuff. The production over in Iceland was ebarasingly cheap, the backstage/green room reminded me… Read more »

Festivali i Këngës is amazing every year!!!! I loved Supernova, Sanremo & EMA

I only watched Melodifestivalen and Festivali i Kenges this year, and they were both great selections.

I really enjoyed Norway this year, the perfect balance between entertaining and focusing on the music, great!

Norway was FAR superior to Melfest IMO. The orchestra really brought that night to life and gave the songs another dynamic!

This year was the first time that I watched national finals, it was a lot of fun and a lot if drama. I voted for Melodi Festivalen and DMGP.

Oh, c’mon, we all know that while Melodifestivalen is our favorite, the award for BEST NF of this season goes to Germany for their uber drama filled no-one-would-have-ever-imagined end! 😛 🙂

You deleted my previous comment and you fixed your article. Hah. So much democracy.

—-> The Swedish *Melodifestivalen*! The *Dansk* Grand Prix! <3
Although the winner was FAIL but overal i really liked the Danish Grand Prix…Prefered all the way my dear sweetheart Anne Gadegaard with her *Suitcase* to represent Denmark in the Diamond Vision.. The *Maltese* NF! <3
The feeling i had at that time was very nice & Malta's National Final is very memorable 4 me <3 🙂

—-> The Swedish *Melodifestivalen*! The *Dansk* Grand Prix! <3
Although the winner was FAIL but overal i really liked the Danish Grand Prix…Prefered all the way my dear sweetheart Anne Gadegaard with her *Suitcase* to represent Denmark in the Diamond Vision.. The *Maltese* NF! <3
The feeling i had at that time was very nice & Malta's National Final is very memorable 4 me <3 🙂

MelFest always have good programs and songs. Downside is that most qualified songs were repetitive sounding. Supernova’s small number of grand finalists were good and entertaining, plus Riga Bebrs. Belarus Eurofest has plenty of interesting finalists other than Uzari and Maimuna. Same goes to A Dal, Dansk, Norwegian, Lithuanian and Swiss’. Germany’s controversy was entertaining so I can include that too.

Last place for moldovan NF where there was no winner as a signer. The winner was corrupcy.

The Norwegian one that is. The Danish one was TERRIBLE.

Supernova, Eesti Laul, Melodifestivalen and A Dal. Melodi Grand Prix was good too.

Didn’t watched most of these.
Voted for Supernova, because the best song won.
I liked when Melani Rene sang Chandelier on Switzerland’s NS.

Loving this year’s Norway’s Melodi Grand Prix. The quality of all songs were great, there were no fillers, the orchestra brought oomph to every songs, and they chose deserving winners (though I wanted Karin Park to go to Vienna). Especially the songs, I think they all could go to Eurovision and could do well there.

Supernova was fantastic this year. USFÖ was pretty good too, as was Melodifestivalen.

Melodifestivalen blew everything else out of the water #sorrynotsorry